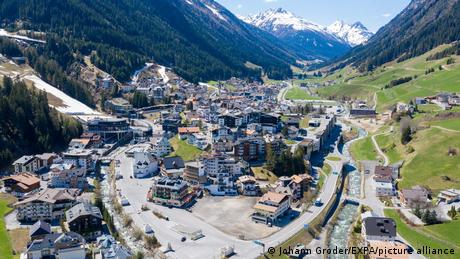 The first civil trial against Austrian authorities in the ski town of Ischgl began on Friday. Plaintiffs accuse the government of mishandling the coronavirus outbreak at the Alpine ski resort, which resulted in unnecessary infections and deaths.

The outbreak in Ischgl, a popular resort in western Austria, is considered one of Europe's earliest "superspreader'' events of the COVID-19 pandemic and widely credited for spreading the virus across the region.

More than 6,000 people from 45 countries were reported to have contracted the coronavirus in Ischgl and other Tyrolean resorts in March of 2020.

The widow and son of a 72-year-old Austrian man are seeking some €100,000 ($117,000) in compensation. They are backed by Austria's Consumer Protection Association (VSV), which said it is open to a negotiated settlement.

"This starts at the municipal level, continues through the district, state and up to the federal level," Kolba said.

The plaintiffs' claim is backed up by an independent commission report released in December 2020 that found local authorities were too slow to react to the outbreak and committed "serious miscalculations."

Authorities became aware by March 5 that an outbreak had occurred, two days after a group of Icelandic skiers first mentioned symptoms. But even as an Ischgl bartender tested positive for COVID-19 on March 7, it was not until three days later that bars in the area were shut down.

The commission found that authorities should have closed bars, shuttered ski lifts and managed the orderly departures of foreigners as soon as March 8, but it wasn't until March 12 that the ski season in Ischgl was declared closed.

Class action lawsuit in the works

The mishandling caused tourists to flee Ischgl in a panic rather than wait for an organized evacuation, the commission said. This likely contributed to the virus spreading across Austria and Europe.

Those who were affected are now seeking to hold the Austrian government responsible. Friday's civil suit It is the first of 15 lawsuits filed by Austrians and Germans accusing the authorities of serious mistakes in dealing with the pandemic.