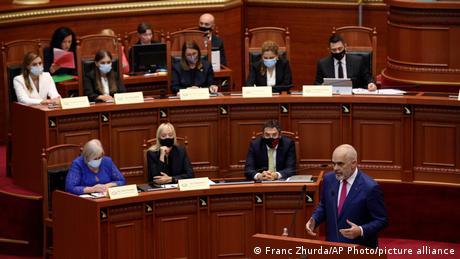 The Albanian parliament on Friday approved a Cabinet dominated by women, following a 20-hour parliamentary debate.

The country's parliament voted 77-53 for the new Cabinet under Prime Minister Edi Rama.

The newly reelected premier said his new government "will enter history as the Cabinet with the highest number of women."

Albania now ranks fifth globally in women's representation in Cabinet, according to the latest UN figures.

The 57-year-old politician has assigned women to top positions throughout his career.

Gender discrimination 'far from over'

Ahead of the vote, Rama said discrimination against women was still prevalent in Albanian society.

"The battle against gender discrimination and domestic violence remains very open and far from being won," he said.

Rama was voted in as premier for the third time after his left-wing Socialist Party's sweeping election victory in April.

He said fighting crime will be among his priorities for his third term.

What has the Cabinet promised?

Rama said the new government will focus on infrastructure projects, combating the pandemic, and repairing the damage from a devastating earthquake that struck in late 2019.

The Balkan nation has been a member of NATO since 2009 and is seeking European Union membership.