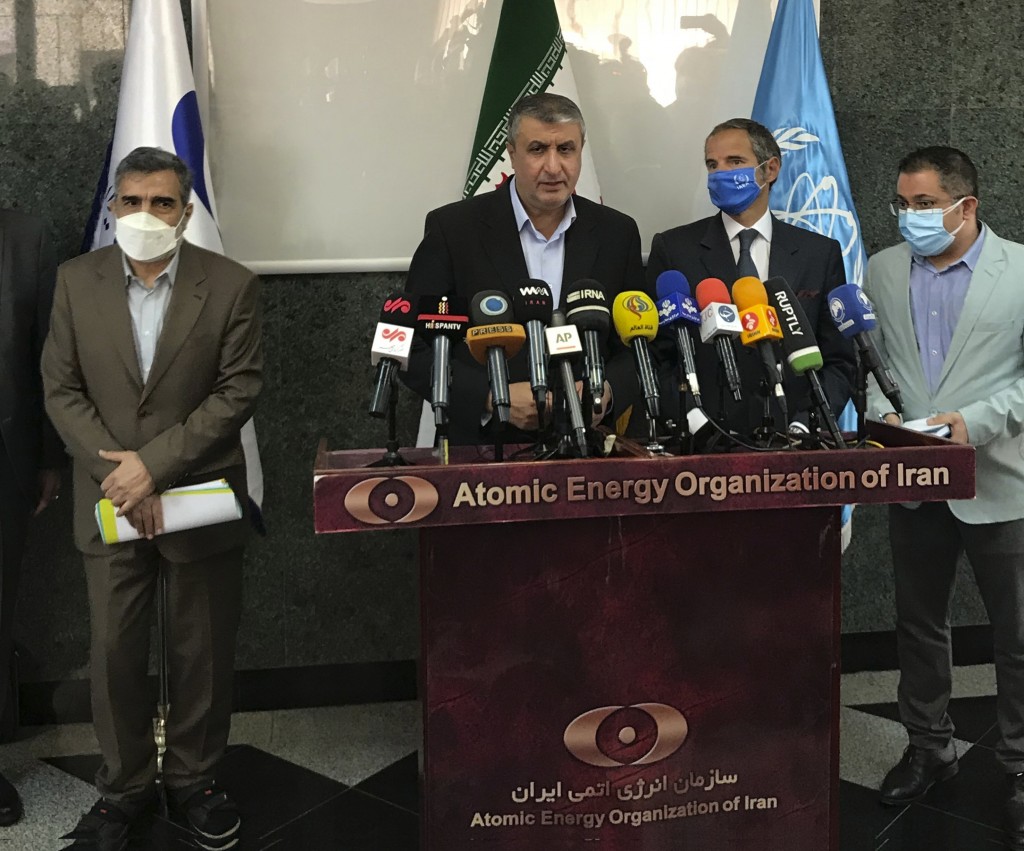 TEHRAN, Iran (AP) — Iran acknowledged on Wednesday that it had removed several surveillance cameras installed by U.N. nuclear inspectors at a centrifuge assembly site that came under a mysterious attack earlier this year.

The chief of the country's nuclear program, Mohammad Eslami, sought to portray the removal of cameras as Tehran's response to world powers reneging on their commitments under the tattered 2015 nuclear deal.

“The parties did not implement their commitments so there were no necessity for the cameras’ existence,” Eslami said after a meeting with lawmakers — remarks apparently aimed at his own domestic audience under the country’s new hard-line President Ebrahim Raisi.

Eslami's comments come days after a confidential International Atomic Energy Agency report that revealed the nuclear watchdog found four surveillance cameras to be destroyed and damaged after their removal from the centrifuge manufacturing site in Karaj, a city about 40 kilometers (25 miles) northwest of Tehran.

In June, Iran accused Israel of mounting a sabotage attack on the site, which makes components for machines used to enrich uranium. Without disclosing details of the assault, Iranian authorities acknowledged the strike had damaged the building.

The attack on Karaj was just the latest in a series of suspected assaults targeting Iran’s nuclear program that have heightened regional hostilities in recent months, as world powers attempt to salvage the now-collapsed nuclear deal. Israel is widely believed to have carried out the sabotage, though it has not claimed responsibility.

Tehran holds all recordings at its sites as negotiations over the U.S. and Iran returning to the landmark nuclear deal remain stalled in Vienna. As Tehran tries to ramp up pressure on the West to grant sanctions relief, the country is now enriching small amounts of uranium to its closest-ever levels to weapons-grade purity as its stockpile continues to grow.

Tehran maintains its nuclear program is peaceful, and Eslami on Wednesday hit back against those who accuse Iran of covertly pursuing a nuclear bomb.

“What Iran has gained in the nuclear field is based on domestic research and development, and nobody can stop this” Eslami said, adding that he will travel to Vienna next week for a meeting with the IAEA. “We should not allow ourselves to be accused of secrecy by the world.”

In a similar statement pitched to the Iranian domestic audience, the country's envoy to the IAEA, Kazem Gharibabadi, also struck a harsh tone against the nuclear watchdog.

The IAEA is not fulfilling “its duties and responsibilities with regard to the terrorist sabotage of peaceful facilities of its members,” Gharibabadi said, warning that “as long as the agency does not address the controversies, problems will continue."