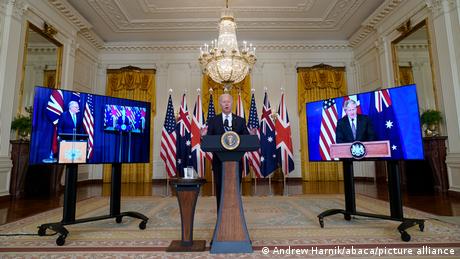 The leaders of Australia, the UK and the US announced the formation of a new Indo-Pacific security alliance on Wednesday, which will include the sharing of nuclear-powered submarine technology.

The partnership will see the three countries share technology to improve their defensive capabilities, including cyber security, artificial intelligence and underwater systems.

The move follows worsening relations between China and the US and other western powers.

"Today we are taking another historic step to deepen and formalize cooperation among all three of our nations because we all recognize the imperative of ensuring peace and stability in the Indo-Pacific over the long term," US President Joe Biden said during the virtual meeting.

UK Prime Minister Boris Johnson said that the three allies — already all members of the Five Eyes intelligence-sharing alliance along with Canada and New Zealand — were "opening a new chapter in our friendship and the first task of this partnership will be to help Australia acquire a fleet of nuclear-powered submarines."

Johnson emphasized that the vessels would "be powered by nuclear reactors, not armed with nuclear weapons, and our work will be fully in line with our [nuclear] non-proliferation obligations."

Australia will become only the second country, after the UK, with which the US has shared nuclear propulsion technology. The announcement likely ends existing Australian plans to acquire new submarines from France.

Australian Prime Minister Scott Morrison said the submarines would be built in Adelaide in close cooperation with the US and Britain. He also announced that the Australian Navy would be upgraded with longe range missiles including Tomahawk cruise missiles.

The US is also part of the "Quad" strategic dialogue group with Australia, India and Japan. Leaders of those four countries are set to meet for the first time in that format in Washington next week.

US officials were careful not to describe the partnership as a deterrent to China's ambitions in the region. Australian Prime Minister Morrison declared that there was an "open invitation for President Xi to discuss other matters."

China's Washington embassy responded to the announcement of the new alliance by calling on the countries to "shake off their Cold War mentality and ideological prejudice."

The White House has previously criticized and sometimes sanctioned Beijing over a range of issues including reported human rights abuses in Xinjiang, its crackdown on dissent in Hong Kong and its handling of the coronavirus outbreak.

Biden has said he wants to work with China on key issues such as the pandemic and environmental issues, but at the same time, US allies are growing more and more concerned about China's actions on the international stage.