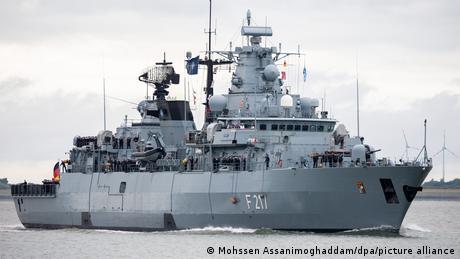 A German Foreign Ministry spokesperson said Wednesday that Beijing rejected a planned stopover of the German warship "Bayern" in a Chinese port.

"After a period of reflection, China has decided that it does not want a port visit by the German frigate 'Bayern' and we have taken note of that," Foreign Ministry spokesperson Maria Adebahr told reporters in Berlin.

The "Bayern" set off from Wilhelmshaven on August 2 for a six-month journey to the Indo-Pacific. Germany has sought to strengthen its presence in the region, and a Chinese stop was meant to help defuse tensions over the naval mission.

But China denied Germany's request to allow the "Bayern" to make a port call in Shanghai, according to the AFP news agency.

Passing through the South China Sea

The German warship's six-month journey includes sailing through the South China Sea, a flashpoint of tensions between China, its neighbors in the region and their western allies, including the United States.

German Defense Minister Annegret Kramp-Karrenbauer said before the ship's departure that the goal was to show support for Berlin's allies in the region.

"For our partners in the Indo-Pacific, it is a reality that sea routes are no longer open and secure, and that claims to territory are being applied by the law of 'might is right,'" she said.

But Kramp-Karrenbauer insisted the mission was not directed against a specific country, and said Germany's offer to dock at a Chinese harbor was made "to maintain dialogue."

Beijing claims almost all of the South China Sea and dismisses competing claims by its neighbors. China has also established military outposts on artificial islands in the waters that contain gas fields and rich fishing.