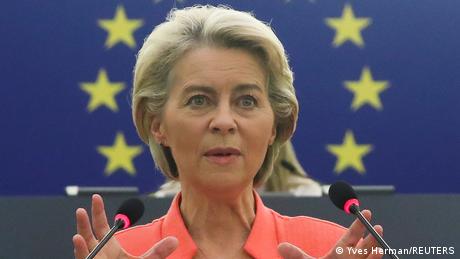 Is the European Union at a crossroads? According to Ursula von der Leyen, the bloc faces major challenges and is weak in some areas, but is trying to take on the difficulties lying ahead.

That's how von der Leyen described the EU's bill of health in her annual State of the European Union address. She appealed to the member states' public spirit — not always convincingly — but at least she gave the impression of not shirking away from responsibilities and duties.

At the same time, she lamented the lack of political will of the member states to truly embrace climate protection; to take on more defense responsibilities; to provide better health care; and to follow up speeches with action.

In that sense, Von der Leyen's situation is no different from that of her predecessors. The EU Commission is not the European government. It's an authority that makes proposals, launches initiatives, and then has to depend on the will of the member states' governments and the majorities in the European Parliament to follow through.

All power to the member states?

During the coronavirus pandemic, the Commission successfully provided the necessary vaccines, despite initial difficulties. On average, 70% of adults in the EU are vaccinated — but differences within the EU are vast.

Von der Leyen did not indicate how she intends to tackle this problem. She's right to lament the scandalous vaccination backlog in Africa and other parts of the world, which are suffering disproportionately. The EU has said it will donate more doses, but that's far from enough. Although more global cooperation is required, von der Leyen failed to outline how exactly the EU would solve this problem.

Then there are the security challenges facing the EU. They are nothing short of overwhelming — from Afghanistan to China to cyberwarfare. Von der Leyen wants to expand the "defense union," which has been stuck in a rut for years, by developing a strategic compass for security and defense issues and holding a summit in France next spring.

This is too little, too late. More importantly, it counteracts efforts to strengthen NATO's European wing. Many member states are hesitant about the Commission's saber-rattling — and rightly so. Instead of trying to get to the bottom of the reasons for their reluctance, von der Leyen merely expressed her disappointment.

The situation on migration policy is similarly bleak. EU member states have very divergent interests, something that is acutely visible in the divide between liberal and illiberal democracies.

The Commission can fidget, admonish and threaten as much as it likes, but that won't achieve anything. There was nothing in von der Leyen's speech that even hinted at a solution — unless you count a planned summit with Africa next spring.

A challenging year ahead

One overriding issue is to implement an ambitious climate policy to guarantee a safe future that Europe's next generations can and want to live in. Von der Leyen made no qualms about stressing how dear this topic is to her heart.

But, again, she's up against the member states who have yet to agree on how to organize and pay for long-overdue measures toward carbon neutrality.

On the plus side, the Commission was right to ban products from Chinese forced labor to bring production of computer chips to Europe. The success of these concrete projects will provide a good indicator of how effective the EU is.

Von der Leyen evoked the common ground, the values, and the will of all Europeans to achieve ambitious goals, even if they seem distant and unattainable. Work over the coming year until the next State of the European Union address will be challenging.

Just how much can be achieved will depend to no small extent on how the new governments in Germany and France following elections this year and next, respectively, assess and involve the EU to address those challenges.

This opinion piece was translated from German.