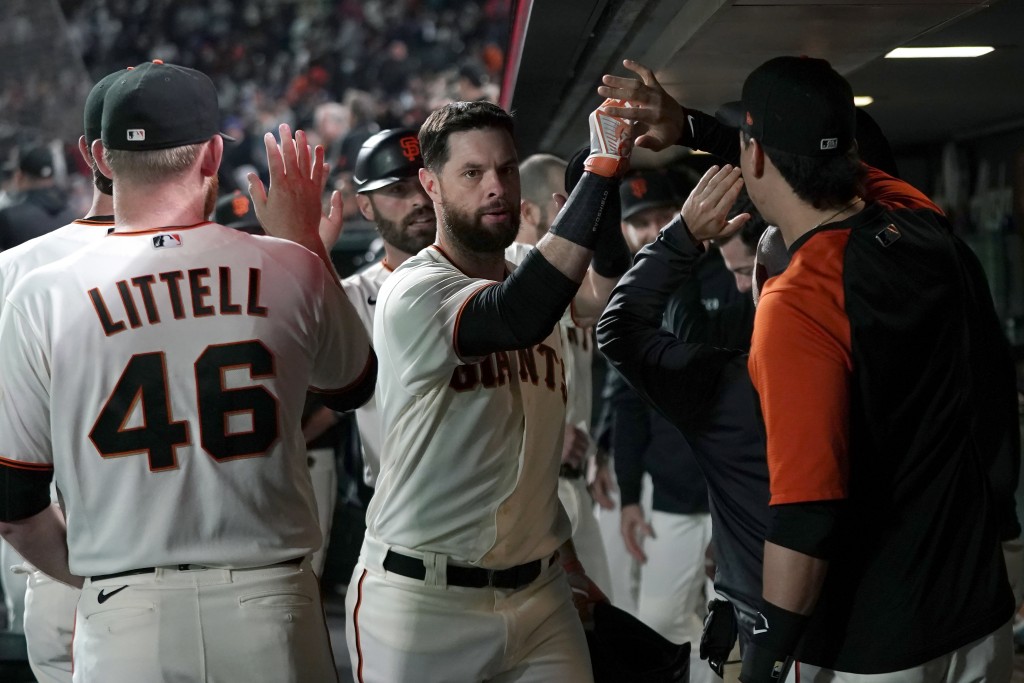 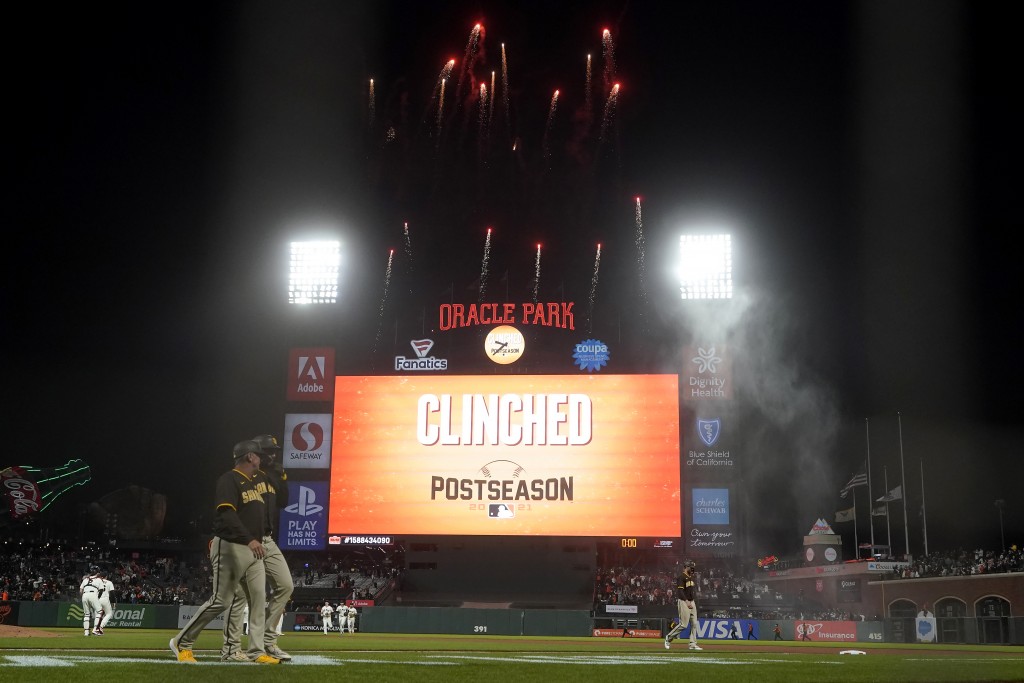 After finishing 29-31 in the pandemic-shortened 2020 season, the Giants have done a complete turnaround in manager Gabe Kapler’s second season. They have the best record in baseball (94-50) with 18 games remaining — nine of them against the Padres, who are trying to win an NL wild card.

San Francisco extended its latest hot streak by getting early power at the plate and steady pitching from the bullpen after opener Dominic Leone threw two strong innings.

Tommy La Stella connected on the fourth pitch from Padres starter Yu Darvish (8-10) and Evan Longoria hit a three-run shot five batters later. Mike Yastrzemski added a solo homer in the fourth when Brandon Belt also went deep as San Francisco secured a spot in the postseason for the first time since 2016.

It’s the earliest date the franchise has ever clinched a trip to the postseason.

The Padres scored on back-to-back doubles by Trent Grisham and Fernando Tatis Jr. off Jarlin García in the third.

Teoscar Hernández had his first career five-hit game and Bo Bichette added a solo home run, his 24th, as the surging Blue Jays improved to 12-1 in September.

Guerrero moved ahead of Angels two-way star Shohei Ohtani for most home runs in the majors. He also eclipsed the single-season high set by his Hall of Fame father with Montreal in 2000.

Manoah (6-2) allowed just one hit, walked none and struck out 10 in snapping a five-start winless streak.

New York won for just the fourth time in 16 games and moved one percentage point ahead of Boston for the second AL wild-card berth, one game behind Toronto, with 18 games left.

Gleyber Torres was the automatic runner on second when Sánchez singled with one out in the 10th off Ralph Garza Jr. (1-3).

Jorge Polanco and Miguel Sanó hit two-run homers in the first inning, and Byron Buxton added a solo homer for a 5-0 lead in the third.

DJ LeMahieu began the comeback with a sacrifice fly in the sixth. Joey Gallo hit his 33rd homer, his eighth with the Yankees, in the seventh. Judge added his 33rd homer.

Clay Holmes (5-1) pitched the 10th as New York ended a six-game home losing streak, its longest in a decade.

Activated from the injured list earlier in the day, Kershaw had missed 57 games with elbow inflammation. The 33-year-old left-hander gave up four hits, walked one and didn’t figure in the decision after throwing 50 pitches over 4 1/3 innings.

Phil Bickford (4-2) got the win with one inning of scoreless relief.

Diamondbacks starter Zac Gallen (2-10) gave up four runs and eight hits in 5 1/3 innings. He struck out four and walked three.

Paul Goldschmidt homered and had two RBIs for the surging Cardinals, who began the day one game behind Cincinnati and San Diego for the second NL wild card.

New York entered three games behind the Reds and Padres.

Dylan Carlson had an RBI double, and Nolan Arenado, Yadier Molina, Edmundo Sosa and Harrison Bader all had RBI singles in the ninth.

Siri finished 4 for 5 with five RBIs while scoring three times for the Astros (84-59). Alex Bregman added a two-run homer, while Carlos Correa and Jose Altuve had two-run doubles. Houston built a 9-0 lead after scoring multiple runs in each of the first three innings off three Texas pitchers.

Houston starter Jake Odorizzi left with right foot soreness after coming off the mound and running to cover first base for the first out of the second inning.

Cristian Javier (4-1), the first of five relievers after Odorizzi, struck out six with one walk while allowing one run over 2 2/3 innings.

SEATTLE (AP) — Mitch Haniger made Boston pay for a costly error by first baseman Kyle Schwarber, hitting a three-run home run with two out in the seventh inning for Seattle.

Reliever Ryan Brasier (0-1) took the loss for the Red Sox, who have allowed 33 unearned runs since the All-Star break, most in the American League.

Xander Bogaerts and Rafael Devers hit back-to-back homers with two outs in the eighth for Boston.

Diego Castillo (4-5) earned the win. Drew Steckenrider pitched the ninth for his ninth save.

With two outs in the seventh, Josh Bell lined a single off the base of the right-field fence to end Alcantara’s no-hit bid. The right-hander then retired his next four batters, leaving with seven strikeouts and no walks after throwing 96 pitches.

Jesus Sanchez had a first-inning RBI single and Alex Jackson doubled home two runs in the ninth. Dylan Floro worked a one-hit ninth for his 11th save.

Paolo Espino (4-5) allowed one run on six hits and three walks in six innings for Washington.