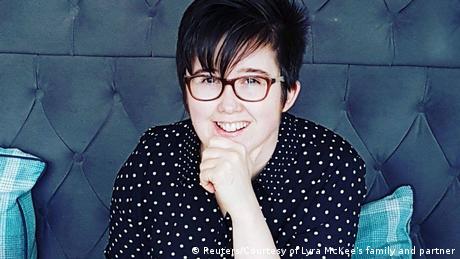 Police in Northern Ireland said on Wednesday that they arrested four men in connection with the 2019 killing of journalist Lyra McKee.

The investigative journalist was shot dead by the dissident republican group New IRA during riots in the northwestern Londonderry city.

What do we know about the suspects?

They were being questioned at a police station in Belfast, authorities said.

"These arrests are the culmination of a detailed two-year investigation into Lyra's murder and the events which preceded it," said Detective Superintendent Jason Murphy.

Police have made several previous arrests in the case.

In February 2020, investigators charged a man, 52, with murdering McKee. Police also confirmed a gun they recovered during searches in Londonderry had been used to kill her.

Authorities have said more than one person was involved in the crime, and the suspect who had fired the shot that killed her remained at large.

The New IRA took responsibility for the killing and offered its "full and sincere apologies" to her loved ones, claiming that they had not intended to shoot her.

The group said McKee was "tragically killed while standing beside enemy forces," a reference to McKee standing close to a police riot vehicle at the time.

Who is Lyra McKee?

The celebrated journalist was an advocate for LGBTQ rights and had been featured on Forbes Magazine's "30 under 30 in media" list in 2016.

McKee, 29, wrote about growing up gay in Northern Ireland and the experiences of the "cease-fire babies," the generation raised after the 1998 peace deal — which the New IRA opposes.

"She was a smart, strong-minded woman who believed passionately in inclusivity, justice and truth," her family said in a statement at the time.