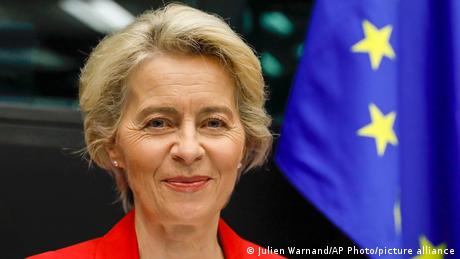 European Commission President Ursula von der Leyen gave her annual State of the Union address to the European Parliament on Wednesday, where she said the coming year would be "another test of character for the EU."

"In the biggest global health crisis we chose to go it together," von der Leyen said, adding that 70% of Europe's adult population was fully vaccinated.

But she stressed that the EU must now focus on global vaccine production. Von der Leyen said Europe was the only region to share its vaccine stock with other countries and pledged an additional 200 million doses to low-income countries.

"I can announce today that the (European) Commission will add a new donation of another 200 million doses until the middle of next year. This is an investment in solidarity, and it is an investment also in global health," she said.

Von der Leyen has been at the helm of the EU executive branch since September 2019. A German conservative political heavyweight, she is considered an ally of outgoing Chancellor Angela Merkel.

Her speech comes as EU nations are still grappling with the coronavirus pandemic and as climate change has become a major topic throughout the region.

This is a developing story, more to come...