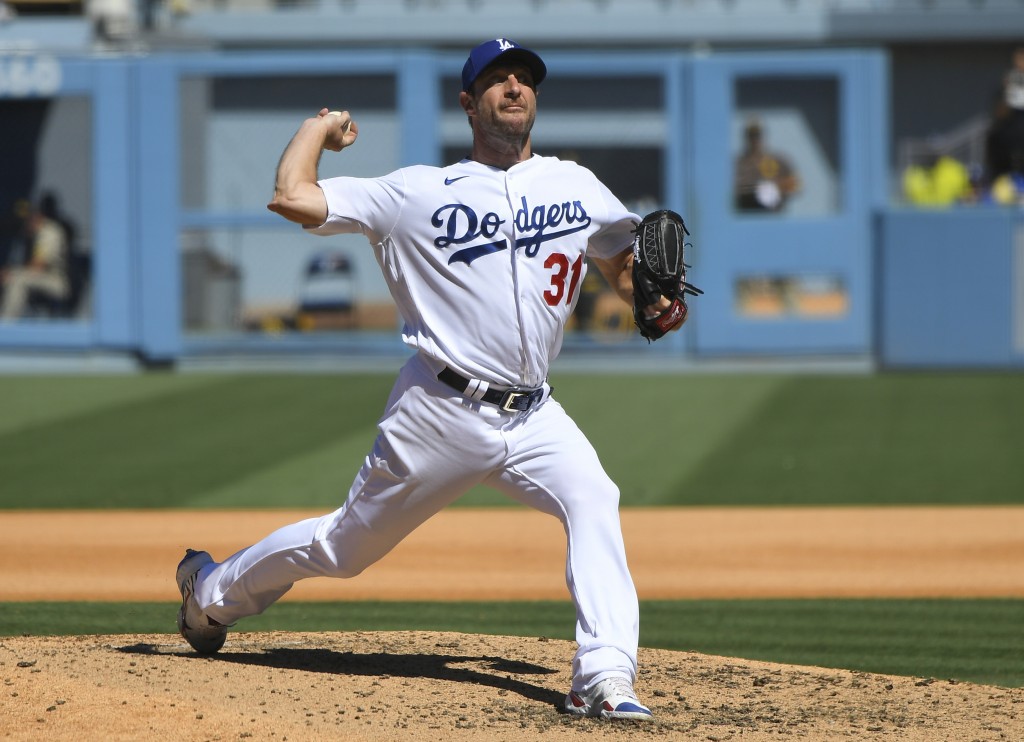 Max Scherzer got his 3,000th career strikeout and took a perfect game into the eighth inning as the Los Angeles Dodgers beat the San Diego Padres 8-0 Sunday to complete a three-game sweep.

Scherzer retired his first 22 batters before Eric Hosmer doubled to deep right with one out in the eighth. The crowd of 42,637 saluted Scherzer with a standing ovation after he finished the inning.

The 37-year-old All-Star reached 3,000 career strikeouts in the fifth when Hosmer went down swinging.

Scherzer struck out nine overall on 92 pitches. The three-time Cy Young Award winner threw an immaculate inning in the second with three strikeouts on nine pitches.

Corey Seager and Mookie Betts hit solo homers, and Justin Turner added a three-run blast in the seventh to back Scherzer (14-4).

Seager went deep with two outs in the fourth off Dinelson Lamet (2-4).

NEW YORK (AP) — Francisco Lindor broke an eighth-inning tie with his third homer, sending a drive into the right-field seats after a pitch tipping spat with Giancarlo Stanton, and the Mets beat the Yankees in a heated Subway Series finale that nearly turned into a brawl.

Lindor hit a three-run homer batting left-handed in the second off on a hanging breaking ball from rookie Clarke Schmidt, had a solo homer in the sixth hitting right-handed on a Wandy Peralta changeup, and broke a 7-7 tie from the left side on a Chad Green (7-7) fastball.

Lindor thought the Yankees whistled Saturday to signal pitches to their batters. The Yankees said it was just Peralta trying to bring energy to the dugout.

It was the first career three-homer game for Lindor.

The Yankees lost for the 12th time in 15 games following a 13-game winning streak and dropped one game behind Boston and Toronto, who led for the two AL wild cards.

The Mets went 4-2 against the Yankees this year and closed within three games for the second NL wild card, but have three teams in front of them.

ST. LOUIS (AP) — Nolan Arenado homered for the second game in a row and five pitchers combined on a five-hitter as St. Louis beat Cincinnati.

St. Louis has won four of six. The Cardinals began the day two games behind Cincinnati and San Diego for the final NL wild-card spot. Cincinnati has lost five of seven.

Arenado hit a two-run homer in the first off Sonny Gray (7-7), who then retired the next 14 hitters.

Owners of the best record in the majors, the Giants matched their longest streak since a seven-game run in August 2020.

They were rolling along with a 6-3 lead in the seventh before the Cubs scored two while chasing Logan Webb (10-3).

The Cubs had the tying run on in the ninth after Jake McGee gave up a one-out double to pinch-hitter Patrick Wisdom. But Frank Schwindel and Ian Happ each grounded to first to end the game. McGee picked up his 31st save.

Flores matched a career high with his 18th homer when he launched a two-run shot to left against Justin Steele (3-3) in the fifth to stretch the lead to 5-2.

ATLANTA (AP) — Ozzie Albies and Freddie Freeman each hit a solo homer off Anthony Bass in the seventh inning, Eddie Rosario went deep off Edward Cabrera in the fourth, and Atlanta beat Miami.

The NL East-leading Braves, going for their fourth consecutive title, padded their lead to 4 1/2 games over the Phillies.

In the ninth, closer Will Smith allowed a leadoff triple to Jesús Sánchez and issued a one-out walk before retiring the next two batters to earn his 32nd save in 37 chances.

Just hours after Corbin Burnes and Josh Hader combined on the record ninth no-hitter in the majors this season — and Cleveland’s record third time being no-hit this year — Lauer threatened to make it two in a row. He didn’t give up a hit until Ryan Lavarnway singled to center with one out in the sixth.

Kolten Wong and Avisaíl García each homered twice. Manny Piña also connected, and the Brewers moved closer to the NL Central title with a three-game sweep.

Guerrero’s drive tied him with Angels two-way star Shohei Ohtani for the major league lead. Jake Lamb also homered during a 10-run third inning for the Blue Jays, who took three of the four in the series.

After Boston reliever Garrett Whitlock (8-4) struck out Eloy Jiménez and Yasmani Grandal to begin the inning, Garcia fell behind 0-2 before hitting a 98 mph fastball over the center-field fence. It was the fifth homer of the season for Garcia, who is filling in at shortstop with starter Tim Anderson on the injured list.

Chicago took a 1-0 lead and a three-hit shutout into the ninth before Craig Kimbrel (4-4) struggled with his control, allowing a hit and two walks before Alex Verdugo's tying sacrifice fly.

The A’s, who began the day two games behind the New York Yankees for the second AL wild card, have lost 17 of 26.

Hearn (6-4) did not walk a batter for the third consecutive start and retired 16 of 17 after giving up back-to-back singles in the first.

McCullers (12-4) permitted one run on three hits with seven strikeouts. He won his third straight decision and has allowed two runs or fewer in three straight starts.

Tucker hit a tiebreaking two-run homer to right-center off Jose Quijada (0-1) in the fifth.

Ryne Stanek pitched a perfect seventh, Kendall Graveman worked the eighth and Ryan Pressly closed it out for his 24th save.

Arizona did more damage to the Mariners’ AL wild-card hopes. Seattle is now three games behind Boston for the second wild-card spot with the Red Sox coming to town Monday for a three-game series.

The Diamondbacks broke open a 1-1 game with four consecutive hits off reliever Anthony Misiewicz (4-5) to start the sixth inning.

Gilbert (2-2) allowed two hits – solo home runs by Mitch Haniger in the fourth and Dylan Moore in the sixth – over 5 1/3 innings.

J.B. Wendelken gave up a two-run homer to Jarred Kelenic in the ninth but finished with a strikeout and a putout at first to earn his first save.

Both of Hampson’s homers came on 0-2 pitches — a three-run shot in the fifth inning on a hanging curveball by Phillies starter Aaron Nola and tiebreaking a two-run blast in the seventh off Hector Neris (2-6).

The Phillies fell 4 1/2 games behind NL East-leading Atlanta with 18 games to play.

Reliever Ashton Goudeau (1-0) pitched two innings for the win. Carlos Estevez worked the ninth for his seventh save.

The walk issued by J.P. Feyereisen (4-4) brought in Victor Reyes.

Candelario’s second homer, a two-run shot, tied the game in the 10th after the Rays took a 7-5 lead in the top of the inning. Kyle Funkhouser (7-3) pitched a scoreless inning to pick up the win.

MINNEAPOLIS (AP) — Kyle Isbel drove in the go-ahead run with a single in the eighth inning and Kansas City beat Minnesota.

Adalberto Mondesi homered for the Royals and Whit Merrifield had three hits, including a pair of doubles.

A quartet of relievers combined for 3 2/3 scoreless innings. Jake Brentz (4-2) struck out two in the seventh, Josh Staumont worked out of a jam in the eighth and Scott Barlow finished for his 12th save.

Lane Thomas hit a three-run homer in the fourth off Bryse Wilson (2-7) to put the Nationals in front to stay. Luis Garcia and Alex Avila also homered for Washington. Juan Soto doubled and tripled and is hitting .407 (22 of 54) over his last 16 games.