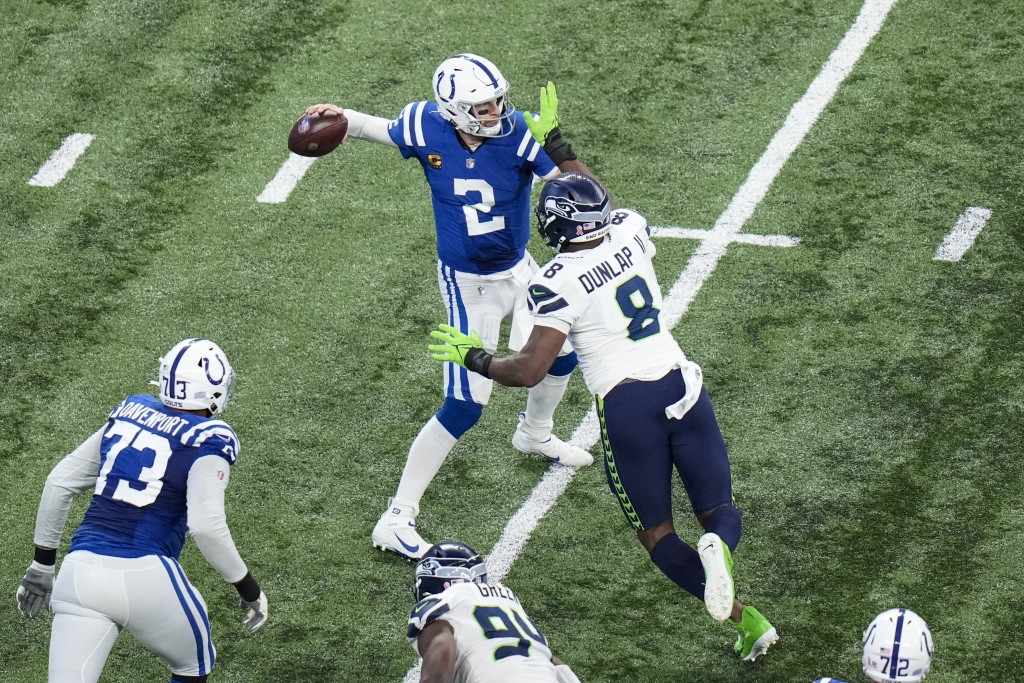 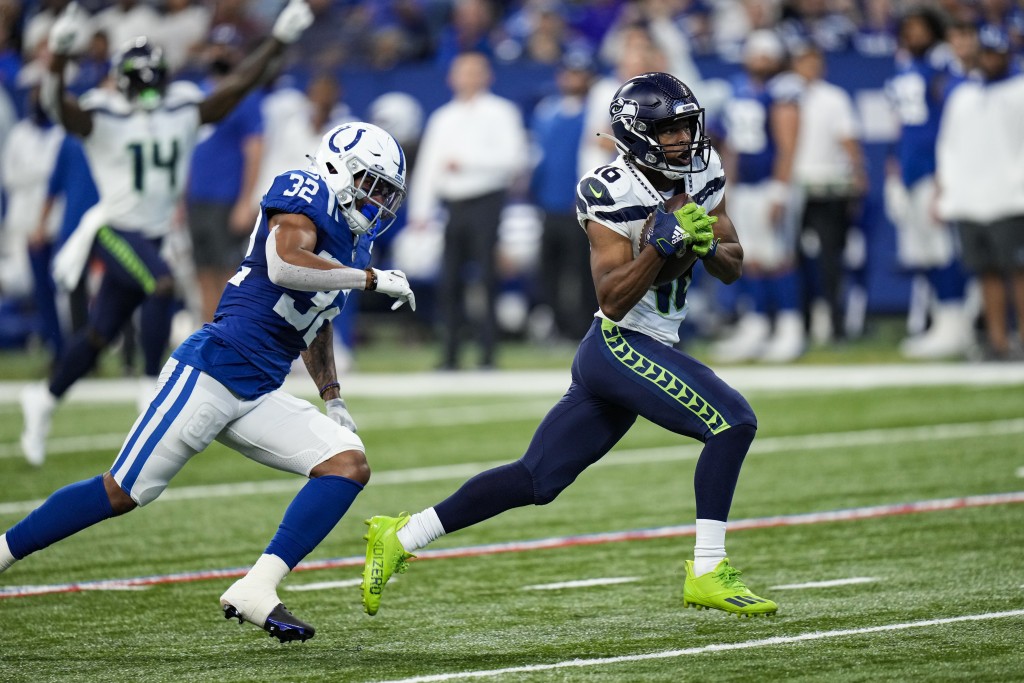 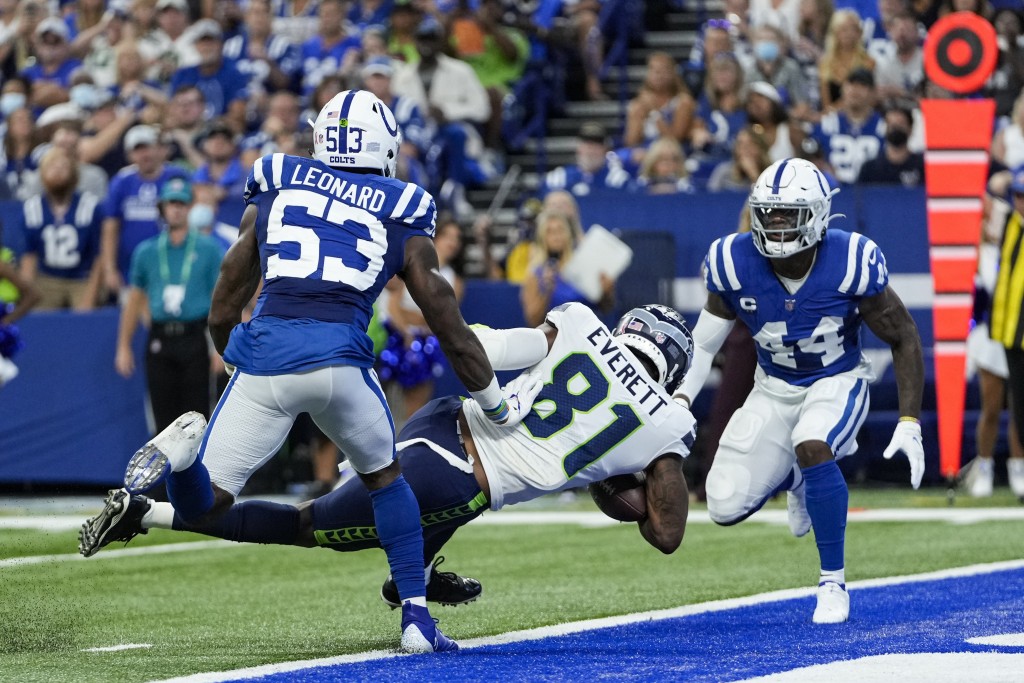 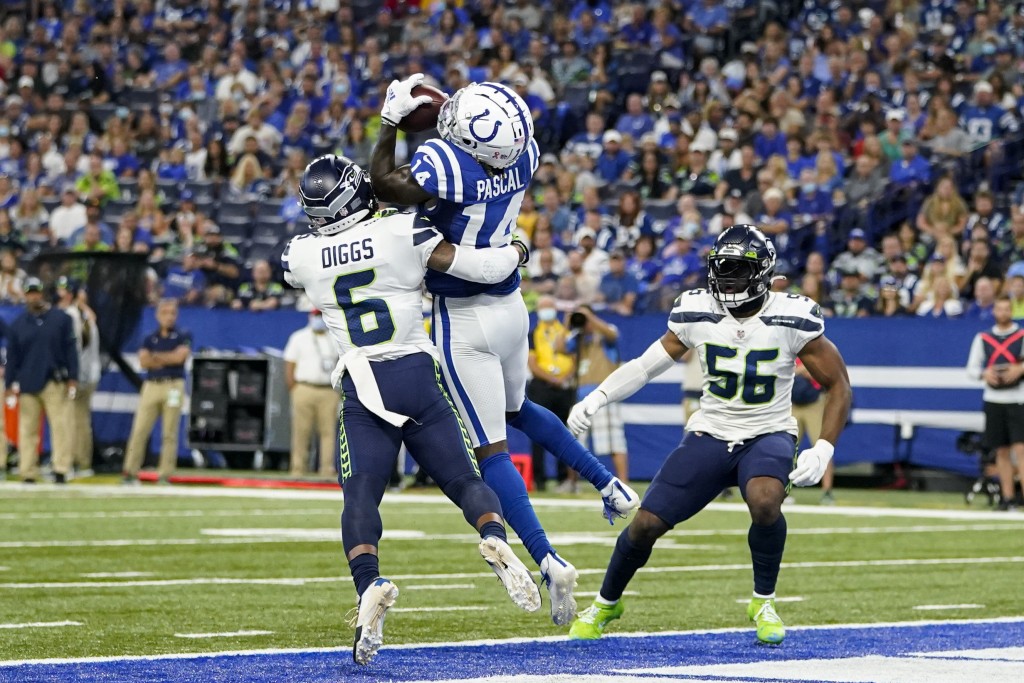 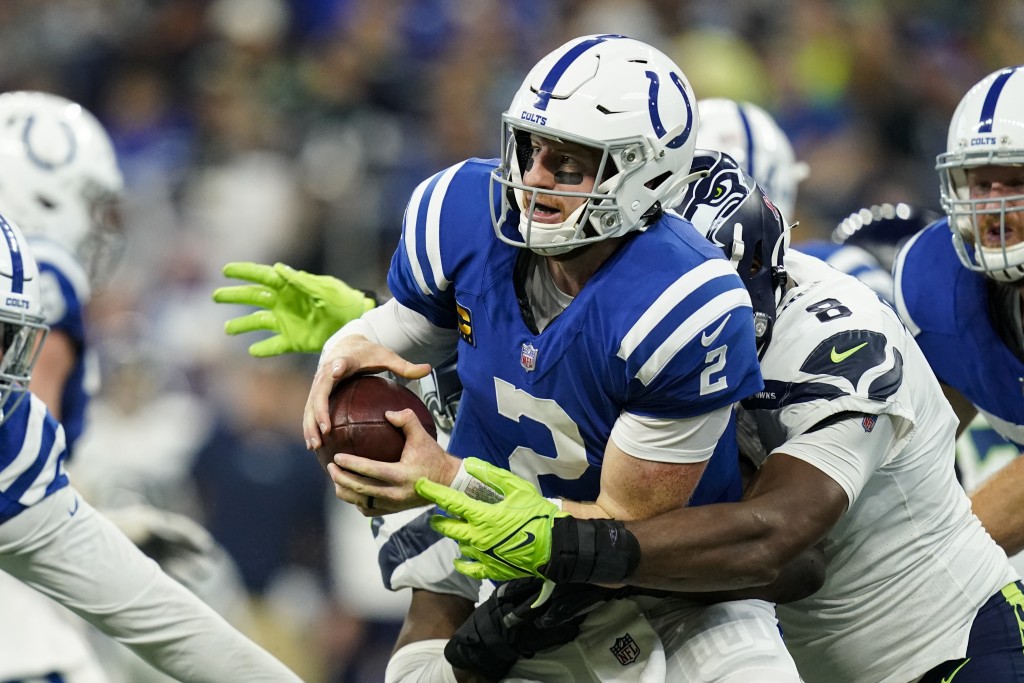 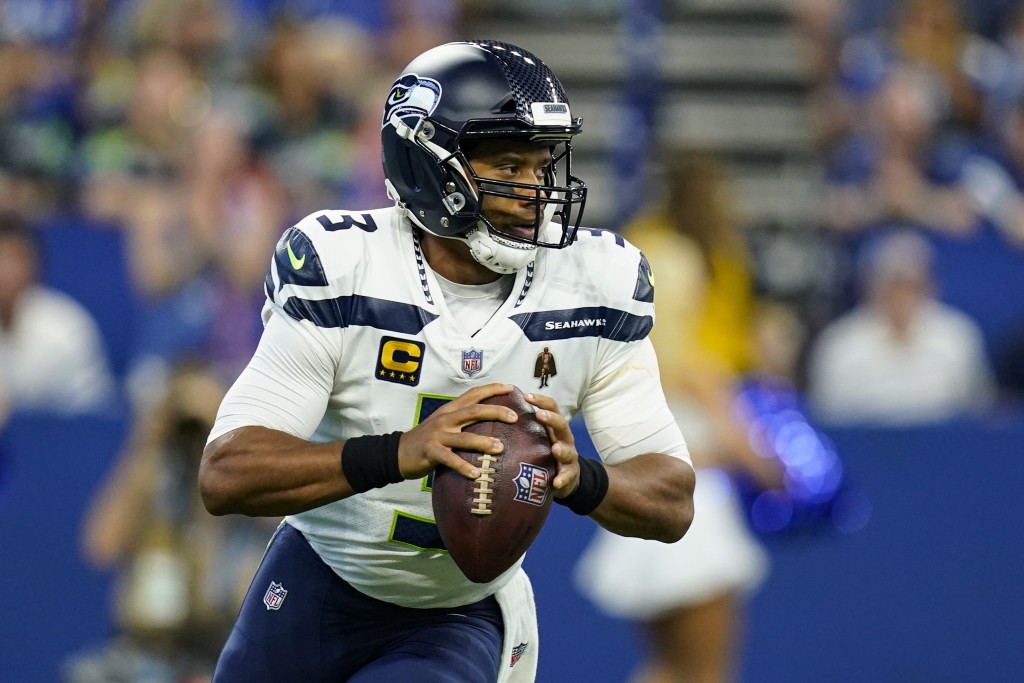 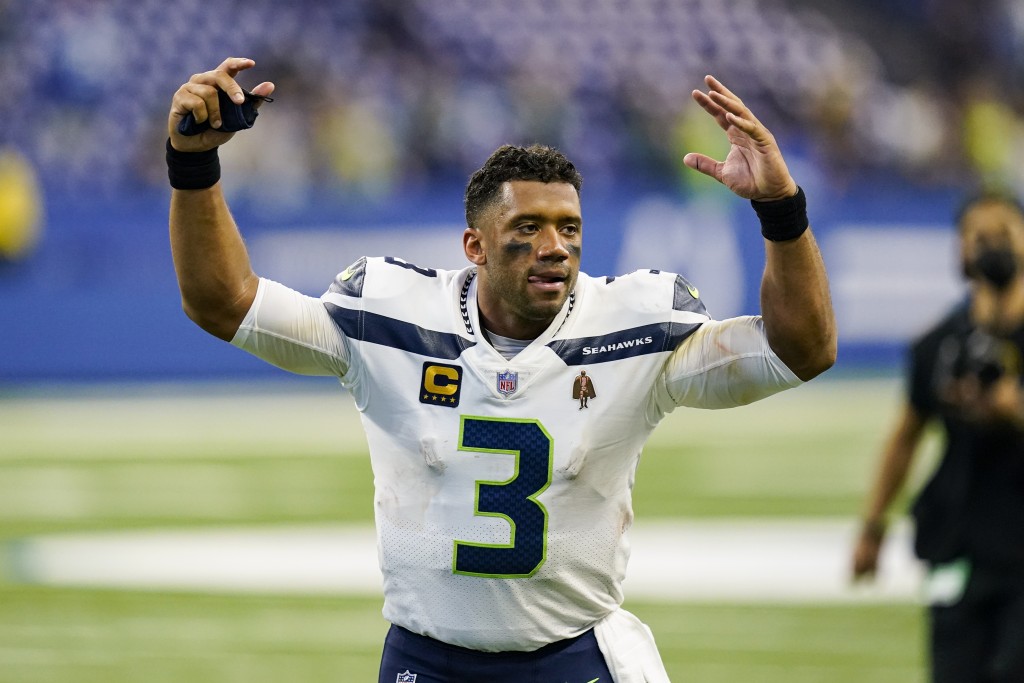 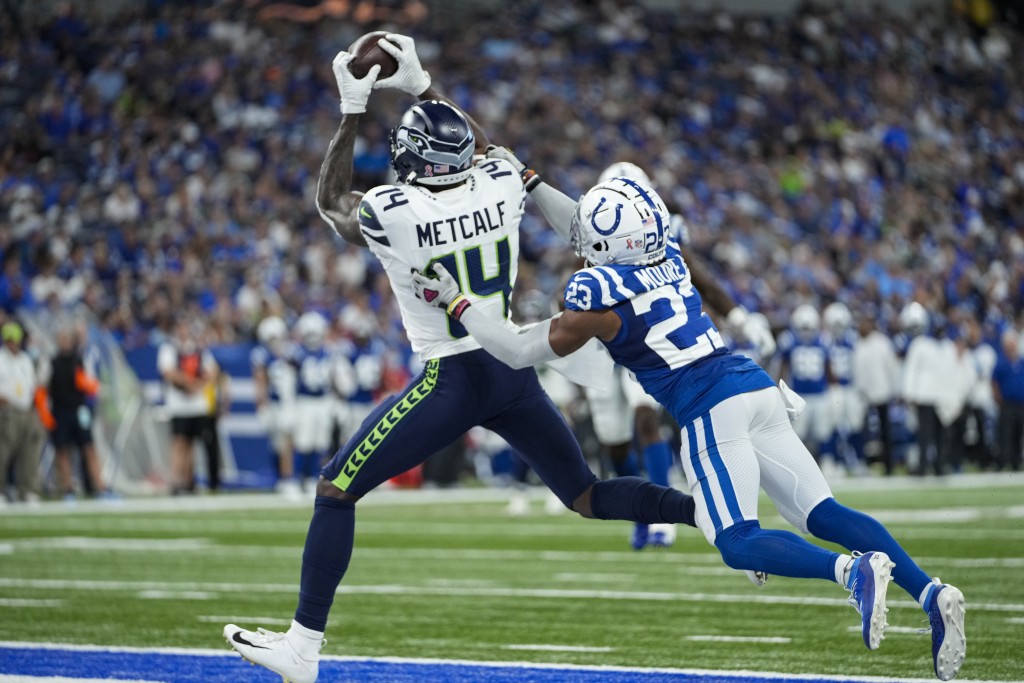 He found open receivers, converted third downs and took advantage of a solid ground game by making big play after big play. Then he turned things over to the defense.

Wilson threw three of his four touchdown passes in the first half Sunday and Seattle's defense clamped down in the second half as the Seahawks pulled away for a 28-16 season-opening victory at Indianapolis.

“We have a great mixture of all the things we've done in the past, we've done a lot of great things and you can't take that for granted," Wilson said. “We're all working together. It's a beautiful thing. It was a great game tonight.”

It was hardly a surprise.

The eight-time Pro Bowler was his usually masterful self working for the first time with new offensive coordinator Shane Waldron.

Despite taking no preseason snaps, Wilson led the Seahawks to touchdowns on their first two drives and posted a perfect passer rating of 158.3 in the first half. He wound up with the second-highest single-game rating of his 10-year career, 152.3, and fell one TD pass short of matching his career high. He finished 18 of 23 with 254 yards with the biggest blow coming on a 69-yard TD pass to Tyler Lockett in the final minute of the first half to give Seattle a 21-10 lead.

“Knowing in pregame he was working on that exact catch, coming down just like that,” Seattle coach Pete Carroll said. “It’s an amazing chemistry that they have."

For the first 30 minutes, Wilson picked apart a top-10 Colts defense that entered this fall with even higher aspirations.

Seattle took a 7-3 lead when Lockett made a twisting, over-the-shoulder catch for a 23-yard score late in the first quarter. Wilson then hooked up with a wide-open Gerald Everett for a 9-yard score that made it 14-3.

After Carson Wentz cut the deficit to 14-10 with a 10-yard scoring pass to Zach Pascal in his Colts debut, Wilson found Lockett free behind two Colts safeties to make it 21-10 at the half. He sealed it with a 15-yard TD pass to Pro Bowl receiver DK Metcalf with 6:41 left in the game.

The defending NFC West champions have won 12 of their past 13 games in the early Sunday timeslot.

For Indy, it was another grim start to the season. The Colts have lost eight straight openers, the past five with different starting quarterbacks.

“Really in the first half Russell Wilson was making plays, that’s what he’s done for a long time,” Colts coach Frank Reich said. “The one that hurt us was the long one.”

And while the Colts defense played better in the second half, the offense bogged down with Wentz under heavy pressure.

Twice, Indy failed to convert fourth-down attempts in Seattle territory and didn't score again until Wentz connected with Pascal on an 11-yard TD pass with 2:08 to go. Wentz was 25 of 38 with 251 yards but it wasn't enough.

“Guys are frustrated with the loss," Wentz said. “I think everyone takes it hard and is accountable for their own mistakes. But I can see how hungry guys are in there. We're frustrated from it but we’ll learn from it.”

Seahawks: Lockett finished with four receptions for 100 yards while Metcalf caught four passes for 60 yards. ... Chris Carson ran 16 times for 91 yards. ... Wilson earned his 99th victory. ... Seattle is now 1-2 all time at Lucas Oil Stadium. ... Only one of the past six games in this series has been decided by fewer than seven points.

Colts: Wentz fell to 0-6 all time against Seattle. ... Indy allowed three sacks after giving up the second fewest (71) in the NFL over the previous three seasons. ... Jonathan Taylor had 17 carries for 56 yards and six catches for 60 yards. ... First-round draft pick Kwity Paye recovered a fumble in his NFL debut. ... Pascal had four catches for 43 yards.

Seahawks: Receiver Penny Hart did not return after being diagnosed with a concussion. Backup running back Rashaad Penny also left early with a calf injury.

“The expectations are high and you want to win and we didn’t do that," All-Pro linebacker Darius Leonard said. “We didn’t throw enough punches, so we've got to come out next week and find a way to win. You don’t want to start out 0-2."

Colts: Stay in the NFC West, hosting the Los Angeles Rams next Sunday.