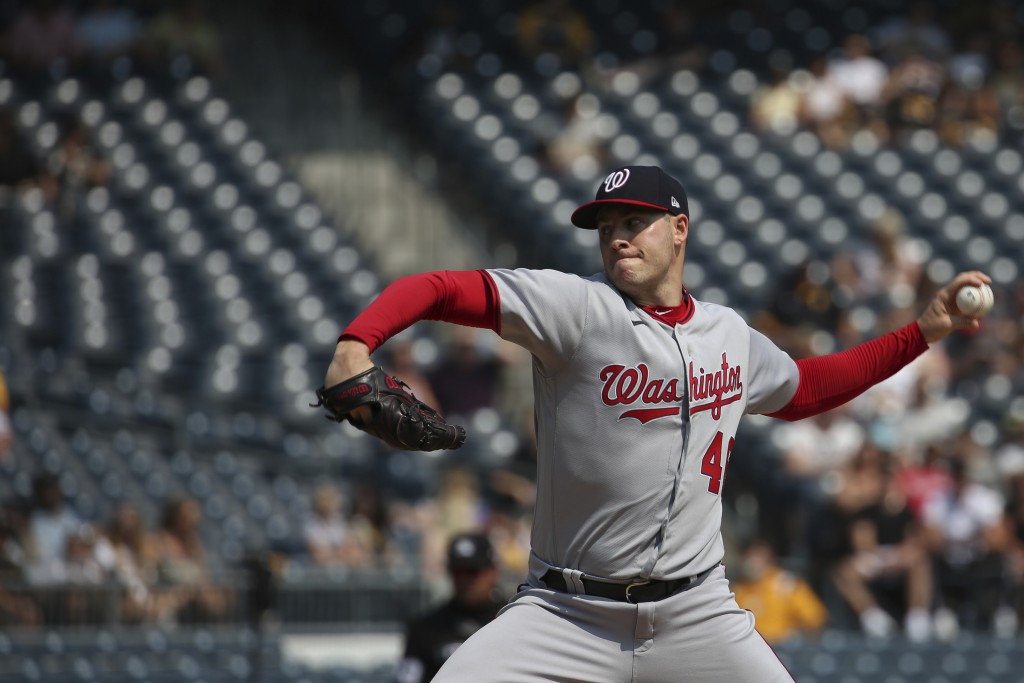 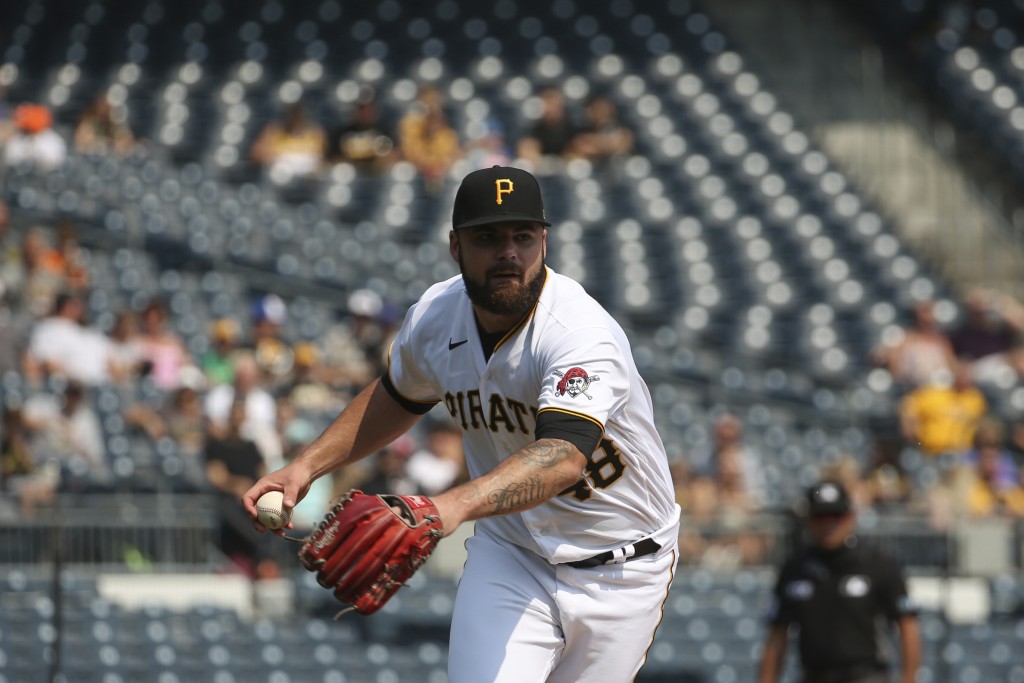 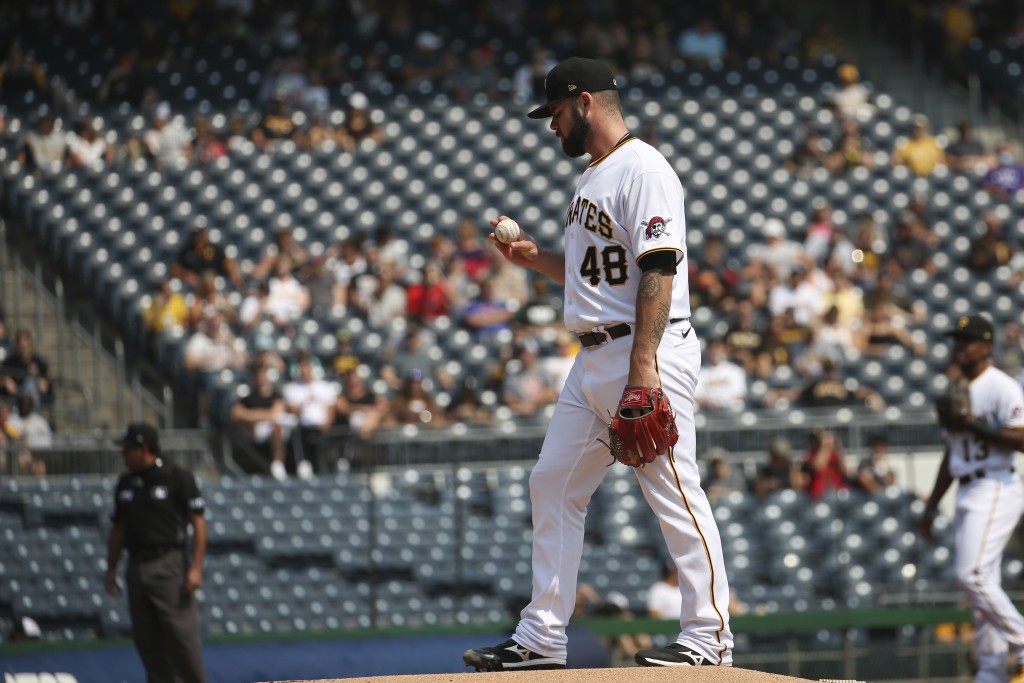 PITTSBURGH (AP) — Patrick Corbin is in the midst of a forgettable season. So is his team.

Still, the veteran Washington Nationals left-hander believes he's found a little something of late. Then again, he always seems to when he's facing the Pittsburgh Pirates.

Corbin working seven strong innings to give Washington's overworked bullpen a bit of a break as the Nationals avoided a three-game sweep by beating the Pirates 6-2 on Sunday.

Corbin (8-14) allowed two runs on four hits, striking out four with two walks to improve to 3-0 with a 0.89 ERA against the Pirates since joining Washington in 2019. The 32-year-old retired the last 13 batters he faced while lasting seven innings for a second straight start.

“The results have been a lot better the last couple,” Corbin said. "But like I said, I don’t feel any different. Just maybe attacking the zone a little bit more. Trying to be more aggressive. Trying to finish this year strong. Pitch as well as I can in the starts I have remaining and finish on a high note.”

Corbin, one of the dwindling number of players remaining from the group that won the World Series less than two years ago, has spent most of the year struggling to find any sort of consistency. Against the Pirates, he kept the ball down, let the defense do most of the work while getting into a rhythm with catcher Alex Avila.

“I wanted Alex to catch (Corbin) a couple times to get him back on track,” Washington manager Davey Martinez said. "I don’t know if I’ll do it again. I might want one of these young guys to catch him.”

Lane Thomas hit a go-ahead three-run homer in the fourth off Bryse Wilson (2-7) to put the Nationals in front to stay. Luis Garcia and Avila also homered for Washington. Juan Soto doubled and tripled and is hitting .407 (22 of 54) over his last 16 games.

“We’ve been scoring some runs,” Corbin said after Washington won for just the fourth time in its last 16 games. “We’ve been in a lot of these games and it seems something doesn’t quite go our way toward the end. It seems like it’s been a learning experience for our guys.”

Pittsburgh fell to 0-13 when going for a series sweep and is the only team in Major League Baseball without a sweep with just three weeks left in the regular season.

“Obviously, you want to get those wins against any team that you can,” Pirates shortstop Kevin Newman said. “But we look at the positives and say that’s a series win. And, really, stringing those together is kind of the goal. Obviously, the icing on the cake is a sweep.”

Wilson fell to 0-4 since being acquired in a trade that sent closer Richard Rodriguez to Atlanta. Wilson's numbers since arriving in Pittsburgh entering were OK if not great — a 4.35 ERA in six starts — but he was undone by the long ball against the Nationals. Wilson had allowed four home runs in 31 innings with the Pirates but gave up three in just 4 1/3 innings on Sunday.

Wilson appeared to be in good shape entering the top of the fourth and quickly retired the first two batters he faced. Avila, batting seventh, then drilled a long home run to the seats in right field. Adrian Sanchez followed with a double and moved to third on Corbin's single to left.

Pirates pitching coach Oscar Marin came out to talk to Wilson. It didn't work. Thomas turned on a 91 mph fastball over the heart of the plate and sent high over the 21-foot high Roberto Clemente Wall in right for his fourth home run of the season.

Newman's leadoff triple in the third was Pittsburgh's only extra-base hit. While Newman scored on Bryan Reynolds' sacrifice fly to put the Pirates up 2-1, Corbin shut the door from there.

Pirates: RHP David Bednar, one of the few bright spots out of the bullpen, is dealing with what Shelton called “right side discomfort.” There is no timetable on a possible return for Bednar, who is 3-1 with a 2.18 ERA and three saves in 58 games.

Nationals: Return home to begin a three-game set against Miami on Monday. Washington has won 8 of 13 meetings with the Marlins this season. Paolo Espino (4-4, 4.35 ERA) will make his 16th start for the Nationals.