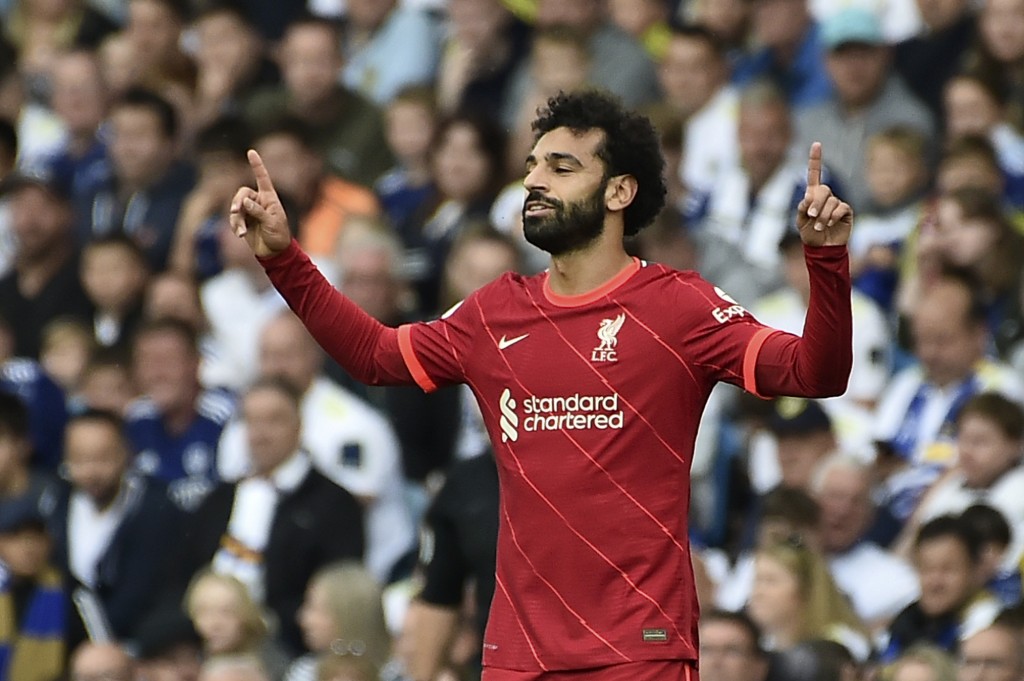 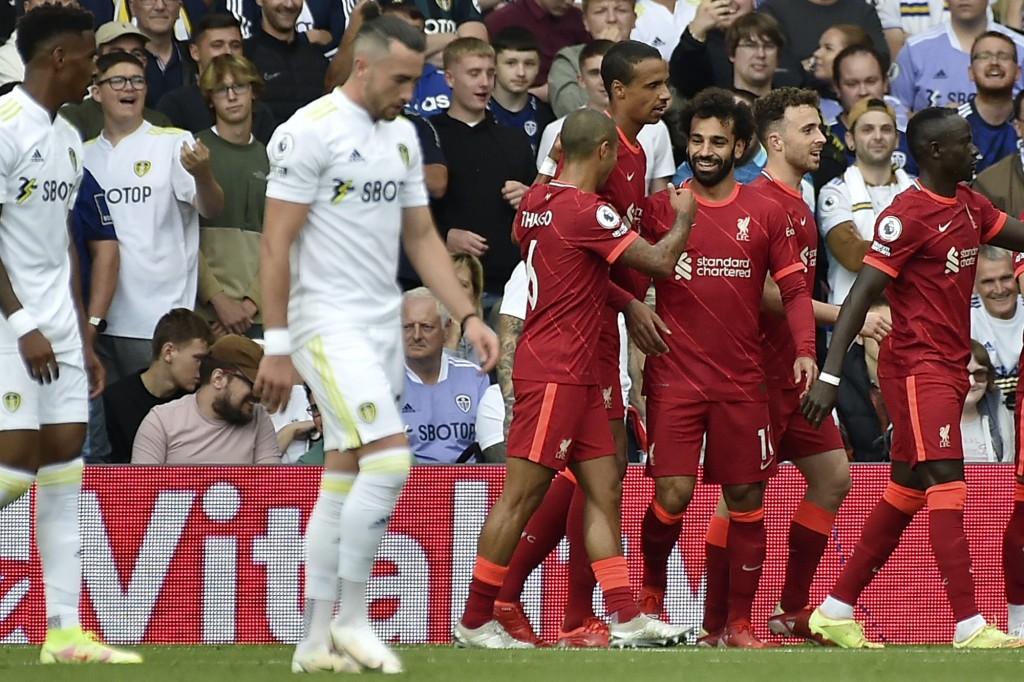 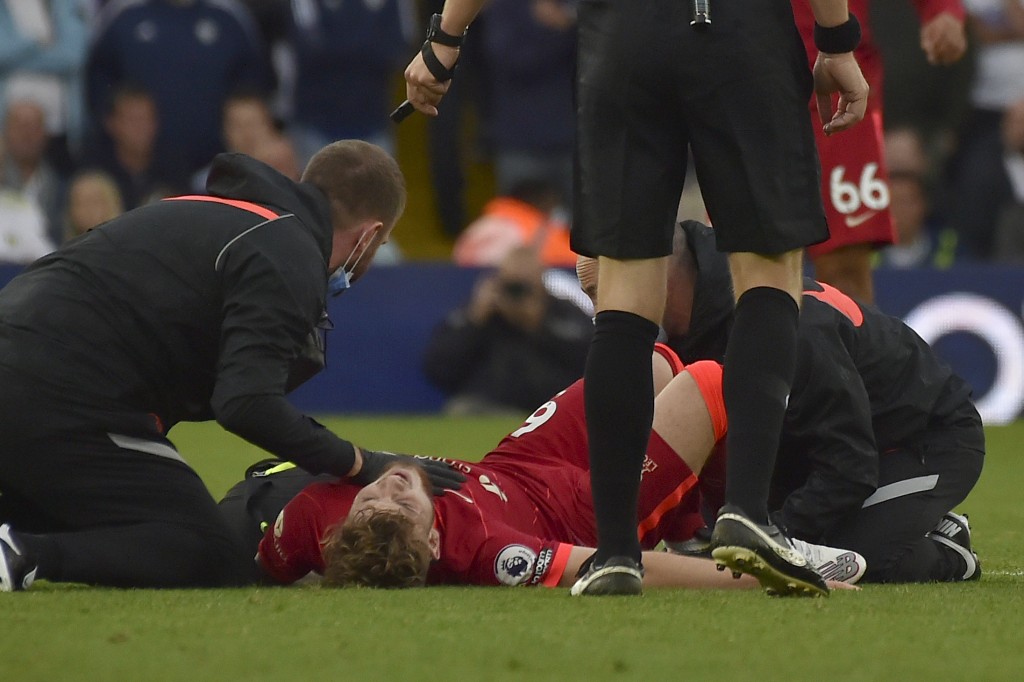 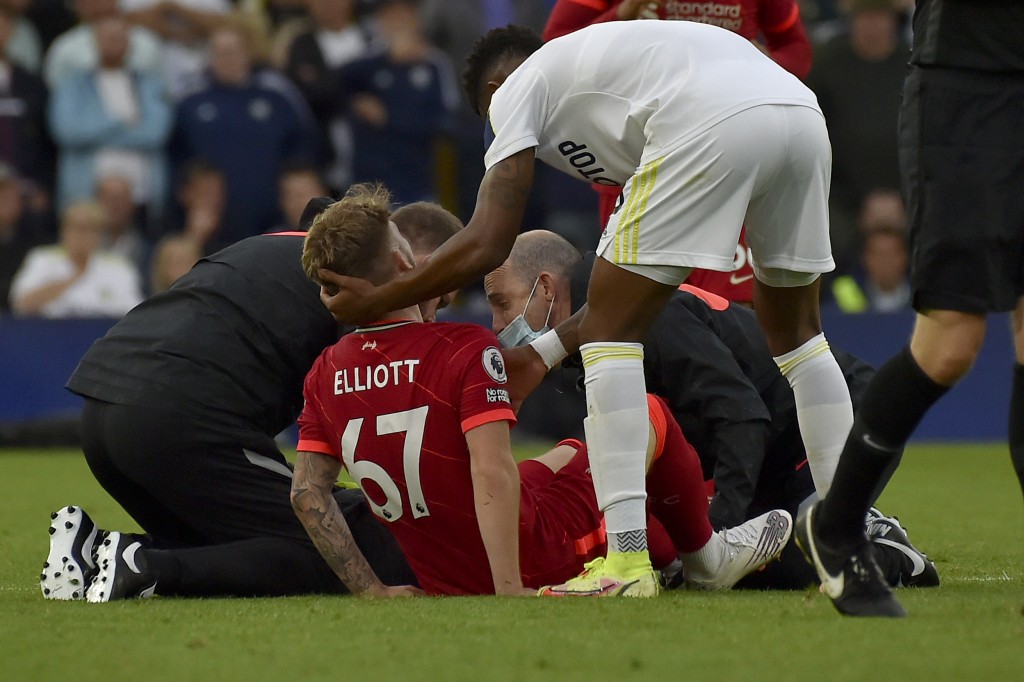 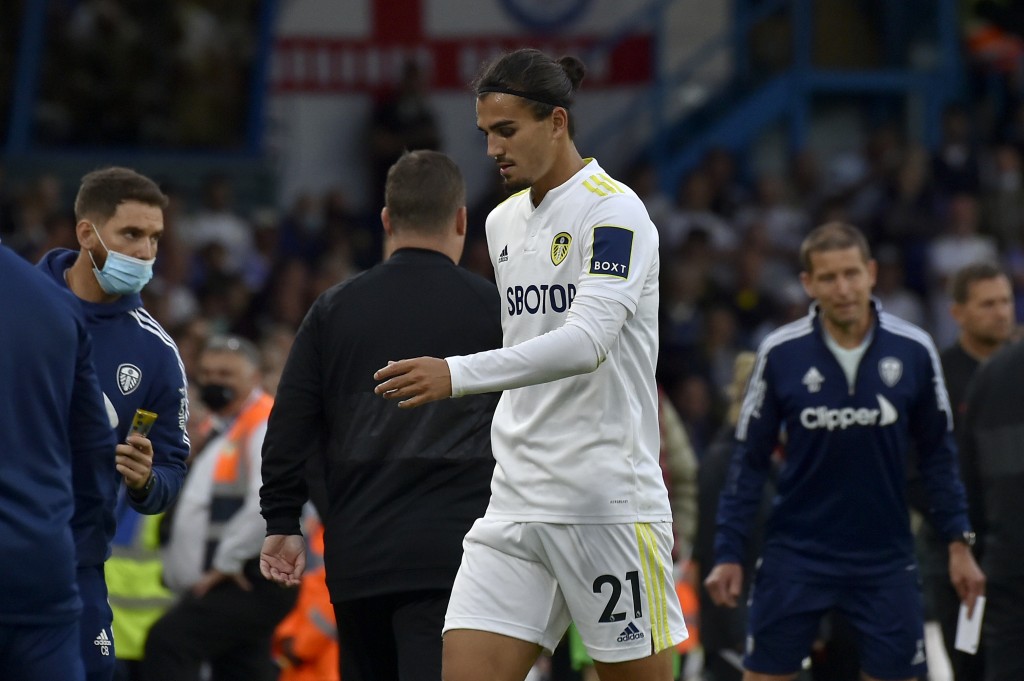 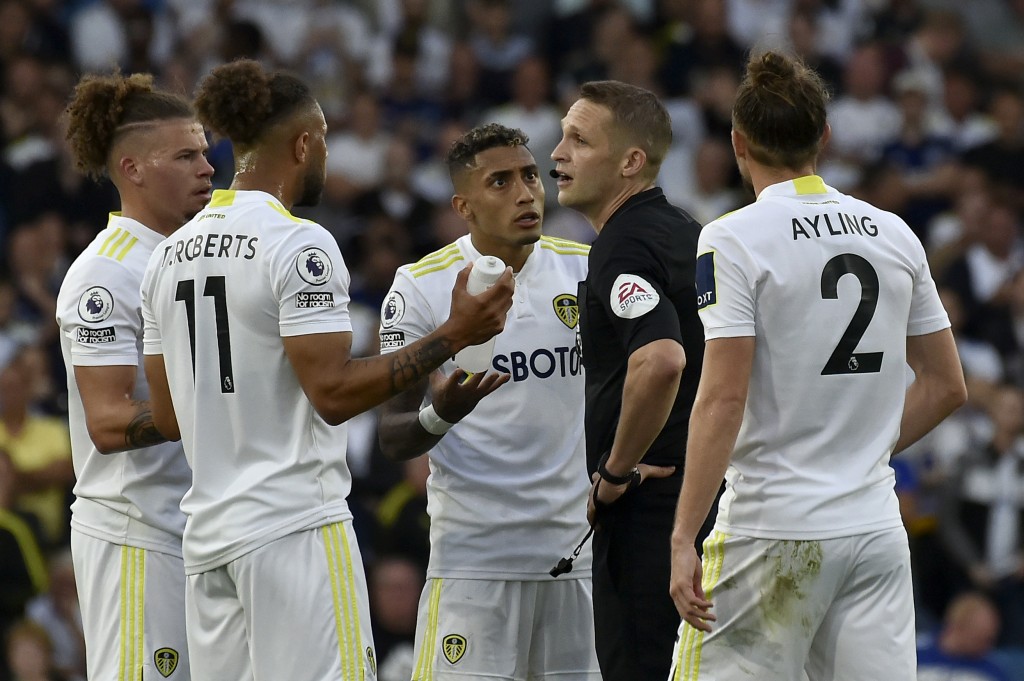 LEEDS, England (AP) — Mohamed Salah scored his 100th Premier League goal to set Liverpool on its way to a 3-0 win over Leeds that was marred by a serious ankle injury to Liverpool midfielder Harvey Elliott on Sunday.

Salah converted a cross by Trent Alexander-Arnold in the 20th minute to become the 30th player to reach the milestone, with only four getting there quicker than the Egypt winger's 162 appearances.

Fabinho poked in a second goal at a corner in the 50th and Sadio Mane added a third in stoppage time, extending Liverpool's unbeaten start to the season after four games. The Reds are on 10 points along with Chelsea and Manchester United, one more than defending champion Manchester City.

Liverpool looks set to be without Elliott for a considerable period, though, after he hurt his left ankle following a tackle by Leeds substitute Pascal Struijk that earned the defender a red card in the 60th minute.

The 18-year-old midfielder was in a lot of pain and Salah immediately beckoned Liverpool's medical staff to come onto the field and treat Elliott, who was eventually taken off on a stretcher while receiving oxygen.

Elliott posted a picture of himself with thumbs up on Instagram before the full-time whistle, writing: “Thank you for the messages guys! Road to recovery.”

Elliott has forced his way into Liverpool's starting lineup this season, ahead of much-heralded midfielders like Jordan Henderson and Thiago Alcantara, and is one of the most highly rated youngsters in English soccer.

Liverpool manager Juergen Klopp looked emotional as he spoke about Elliott's injury, which revived memories of a serious knee injury sustained by Virgil van Dijk that kept the defender out for most of last season.

“I heard it was dislocated and they couldn’t put it back and he is now in hospital,” Klopp said

“I saw the situation. I could see his foot was not in the right place. That is why we were all shocked.”

Leeds' players, roared on by an expectant full house at Elland Road, played their part in a pulsating match but could have lost by a bigger margin as the visitors missed a hatful of chances, with Mane culpable in particular.

Leeds has yet to win a league game this season and is on two points from four games.

Liverpool, unbeaten in its eight previous top-flight away games, was undeterred by an intimidating atmosphere and there was an air of inevitability when Salah side-footed Liverpool into the lead from right in front of goal.

Only Alan Shearer, Harry Kane, Sergio Aguero and Thierry Henry have scored 100 Premier League goals quicker than Salah, who is in his fifth season at Liverpool and has won the Golden Boot award twice.

Mane then dragged a low shot wide, Illan Meslier saved again to keep out Elliott’s thumping effort, and Van Dijk was wayward with a free header as Leeds was opened up time and again.

Struijk, a 32nd-minute replacement for the injured Diego Llorente, somehow denied Salah a second goal with a last-gasp challenge soon after the interval but Liverpool did eventually double the lead when Alexander-Arnold’s corner was headed goalward by Van Dijk. Leeds failed to clear and Fabinho shot through Luke Ayling’s legs and beyond Meslier.

Leeds substitute Tyler Roberts headed straight at Alisson and then fired wide as the home side rallied, but all hopes of a fightback were extinguished by Struijk’s straight red card in the 60th minute.

Struijk was tracking back alongside Elliott and they collided in a full-blooded challenge, leaving the Liverpool player in agony. He was treated at length on the field before being taken off to applause by both sets of fans.

“I am sure my player did not have the intention to harm him in any way,” Leeds manager Marcelo Bielsa said. "Perhaps what happened after he recovered the ball caused the injury. The tackle was clear but clearly the acceleration at how our player moved caused it.

"In no way did he provoke any harm to the opponent.”

Another last-ditch tackle from Ayling denied Salah after Mane broke clear, and the latter pulled another effort wide with the goal at his mercy.

Bamford lifted the home fans with a brilliant 50-meter effort that had Alisson scrambling to push over but Leeds conceded a third when Mane turned after collecting Thiago’s ball inside and drove home a low finish.