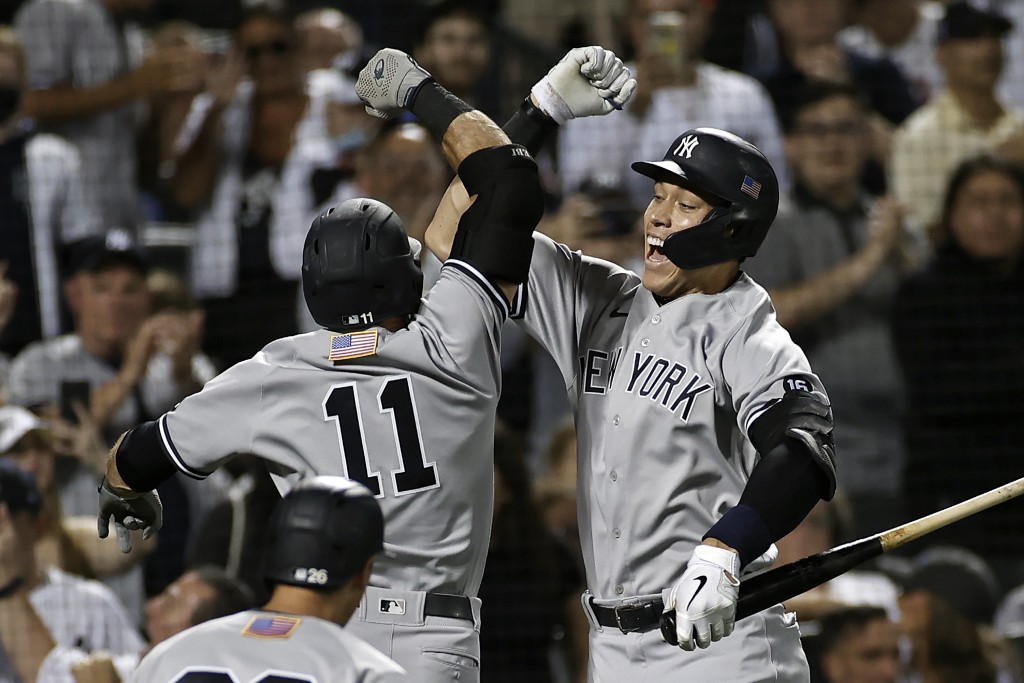 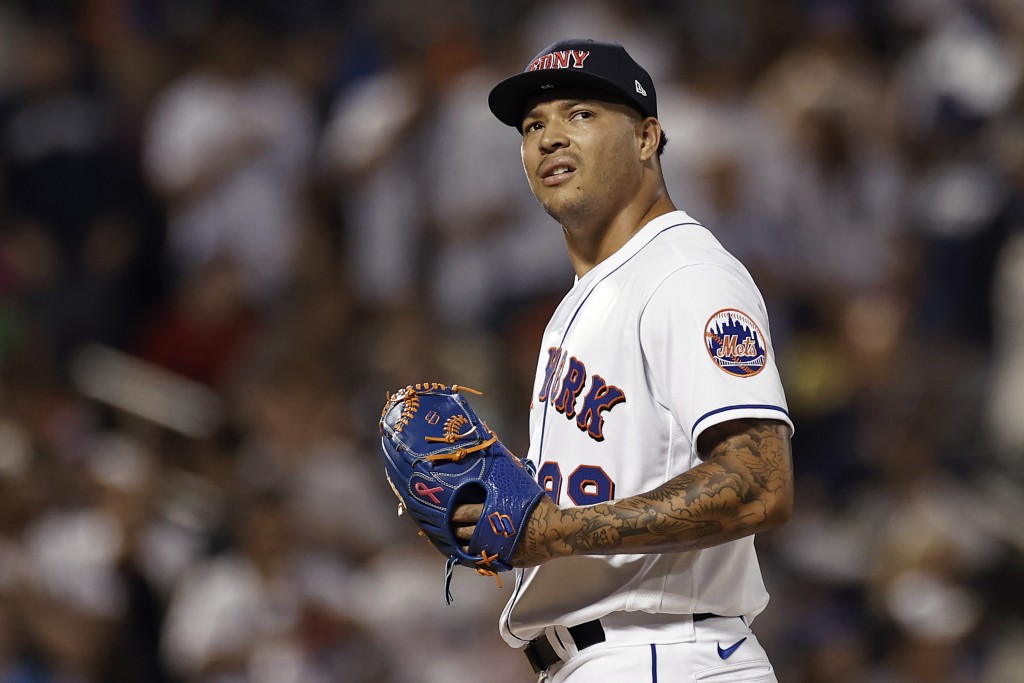 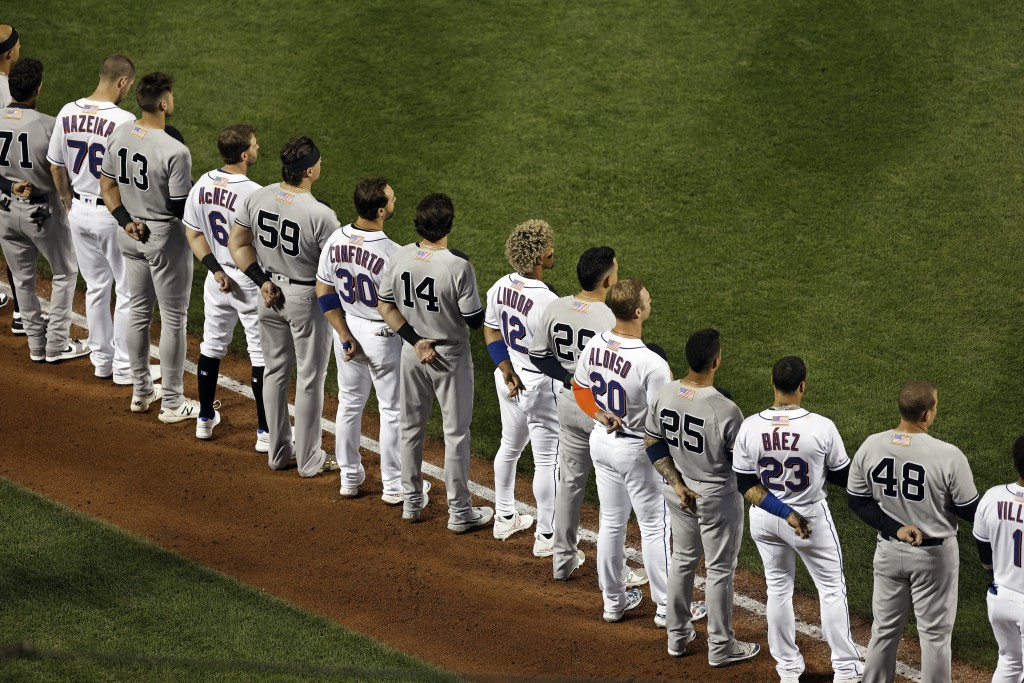 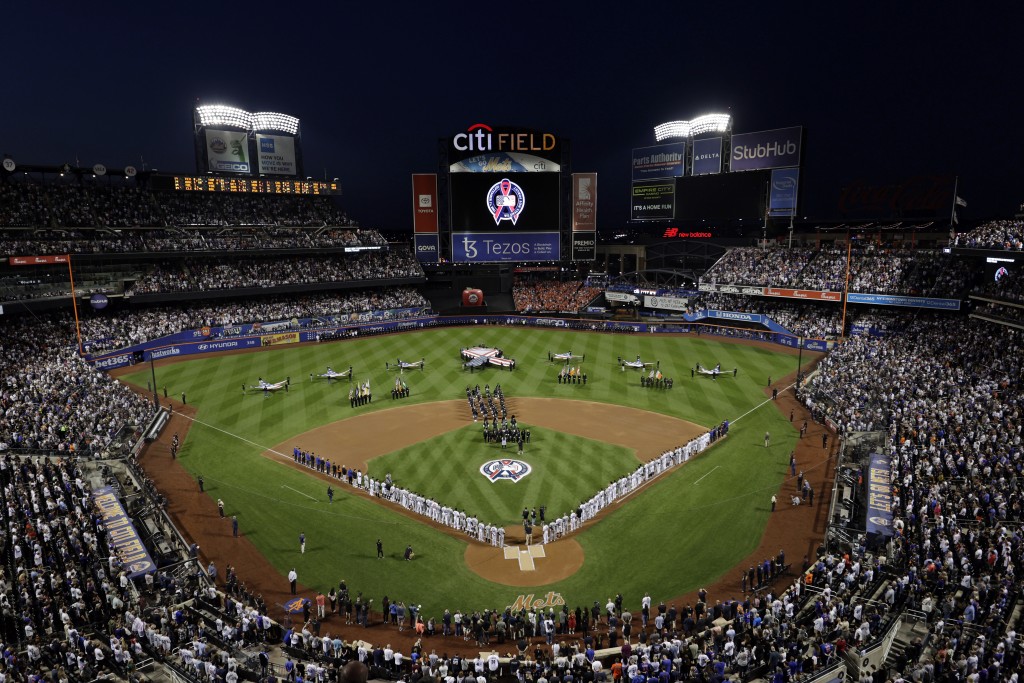 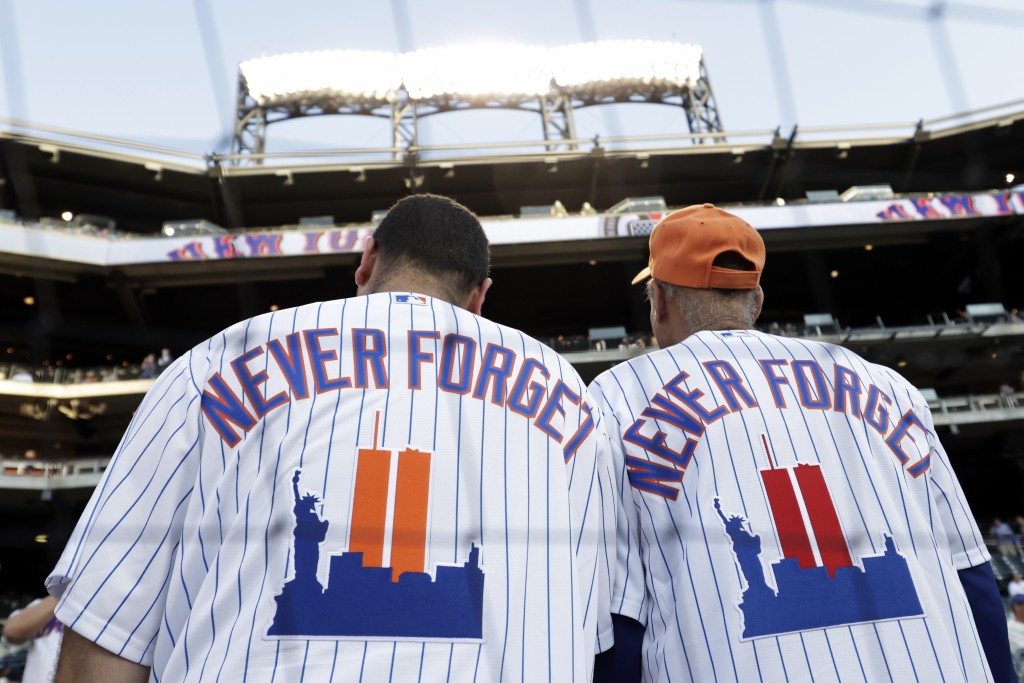 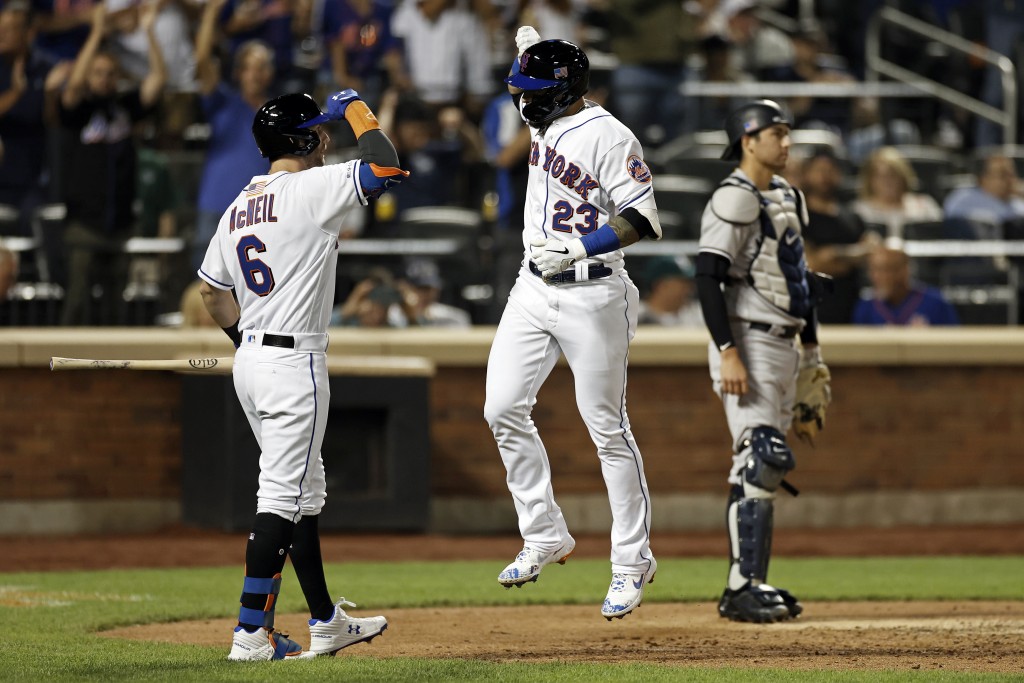 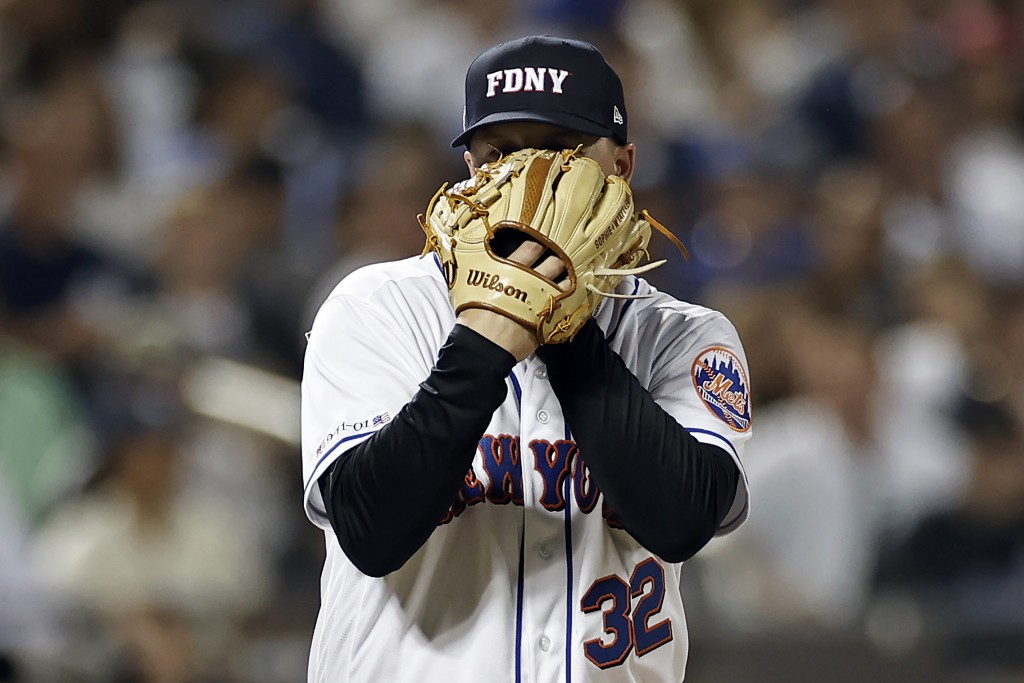 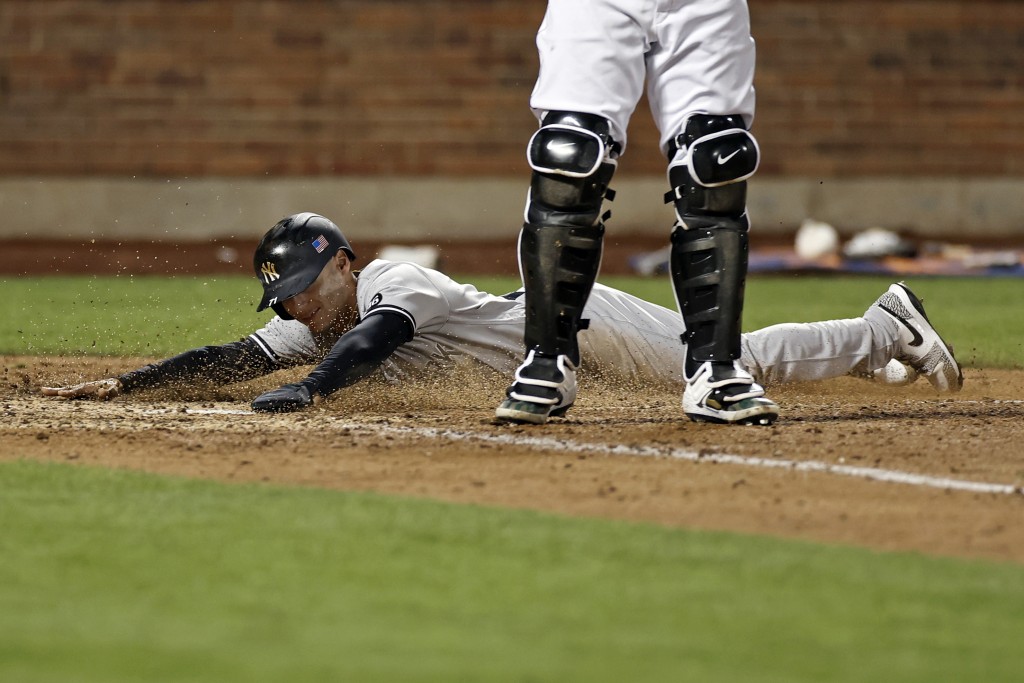 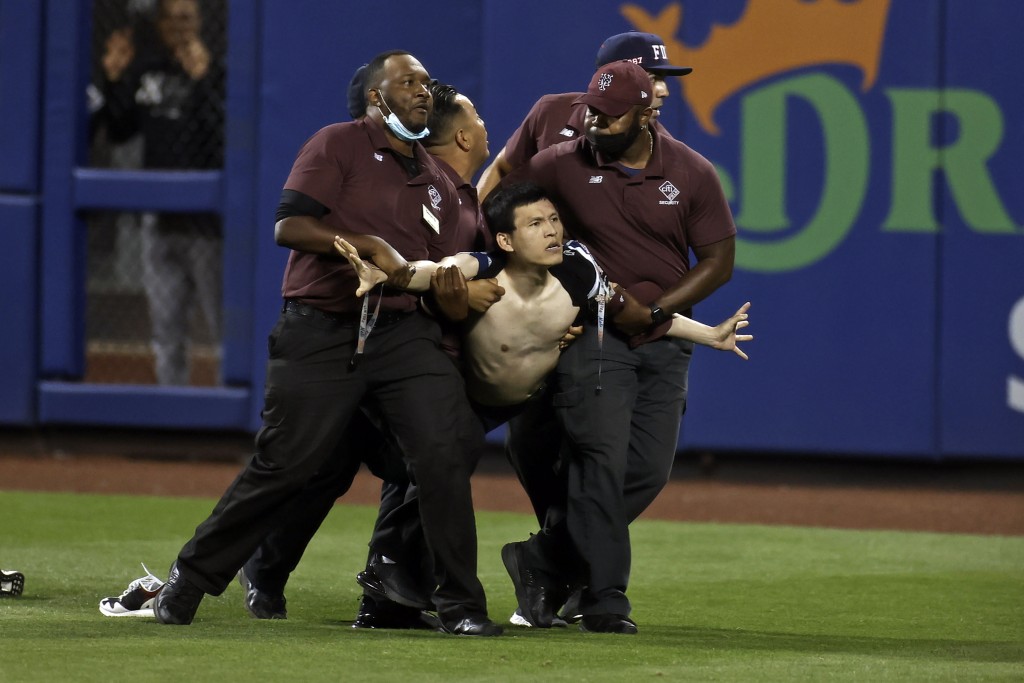 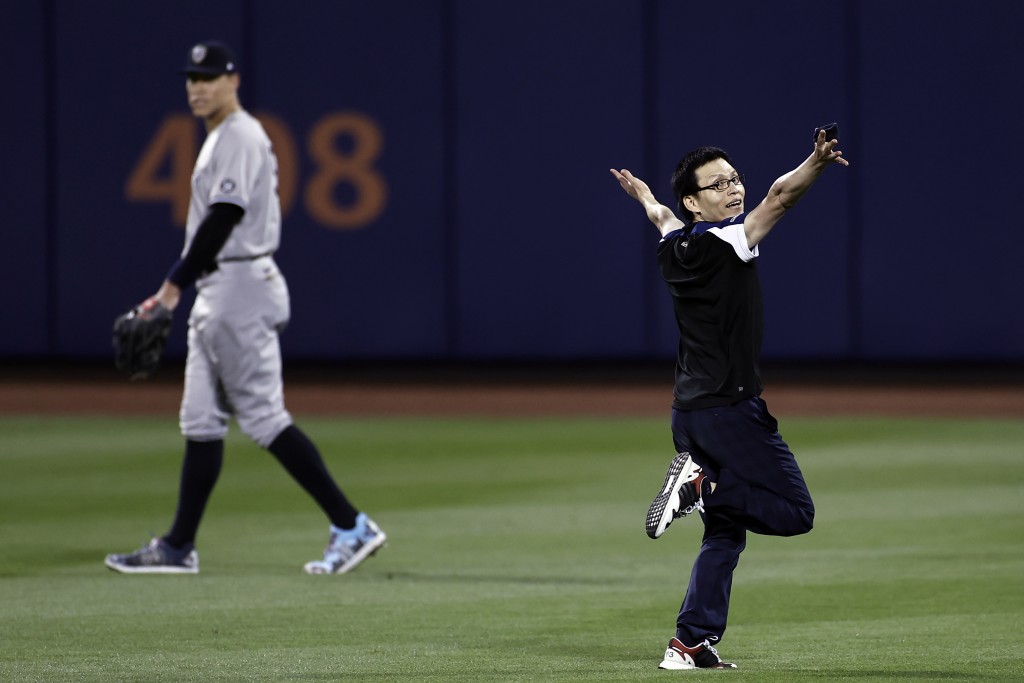 NEW YORK (AP) — A raucous New York crowd of 43,144 lurched and howled — frequently out of their seats — through a back-and-forth Subway Series game that followed an affecting Sept. 11 observance.

Hours after standing shoulder-to-shoulder with their crosstown rivals, Aaron Judge and the Yankees came out ahead.

“It was just about a perfect night,” Yankees manager Aaron Boone said.

Judge tied it with his second homer of the game in the eighth inning, Mets infielder Javier Báez gave away the lead with an error a few at-bats later and the New York Yankees beat their crosstown rival 8-7 at Citi Field on Saturday night following a stirring ceremony on the 20th anniversary of the 9/11 attacks.

The Yankees snapped a seven-game skid and ended a run of 11 losses in 13 games since a 13-game winning streak pushed them to the AL wild-card lead. They dropped into a tie with Toronto for the second wild card after the Blue Jays swept a doubleheader Saturday against Baltimore.

“One of those where we needed everyone, we used almost everyone,” Boone said. “And yeah, definitely feels good to hear some noise in that clubhouse postgame.”

The Mets remained five games behind NL East-leading Atlanta after the Braves lost to the Marlins. New York remained four games behind the Reds and the Padres, who both lost Saturday, for the final NL wild card.

The Yankees jumped to a 5-0 lead shortly after an emotional pregame tribute, then let it all slip away, capped by James McCann's two-run homer that put the Mets up 6-5 in the sixth.

The Mets added another run against Clay Holmes (7-3) before Judge lofted a tying two-run drive off Trevor May (7-3) that stayed in the air nearly seven seconds before dropping over the wall in left with no outs in the eighth.

Five batters later, reliever Aaron Loup induced a potential double-play ball from slow-footed pinch-hitter Luke Voit, but Báez sailed his throw on the pivot from second nearly into the home dugout, allowing pinch-runner Andrew Velazquez to score and make it 8-7.

Mets slugger Pete Alonso hammered a ball to center with two on in the eighth, but it was caught on the warning track for the final out, drawing an enormous groan from the home fans. Alonso squatted in the infield dirt, thinking the ball might have been gone.

“I think our whole dugout did,” McCann said.

“That would have been just special if it went out of the yard,” manager Luis Rojas added.

Judge dived to rob Báez of a hit for the first out of the ninth, and Aroldis Chapman closed out his 26th save after a nervy dropped strike three that required a stellar throw from catcher Kyle Higashioka.

Wearing hats honoring various first responder groups from New York, the teams lined up interspersed along the foul lines for the national anthem — Jacob deGrom next to Gerrit Cole, Brandon Nimmo wedged between Aaron Judge and Giancarlo Stanton — and shared the diamond with first responders, former players and a giant ribbon imprinted with the American flag.

The sold-out stadium buzzed in a way it hasn’t since before the coronavirus pandemic as Mike Piazza, John Franco and other Mets alumi accompanied members of New York’s fire, police, EMT, sanitation, correction and court officers along the outfield warning track. Bobby Valentine, the 2001 Mets manager, was joined by longtime Yankees skipper Joe Torre to throw out a pair of ceremonial first pitches.

In a sign, perhaps, of how much healing has happened since, fans in Queens booed loudly when Yankees star DJ LeMahieu was introduced for the game’s first at-bat.

“I know it's Sept. 11,” Yankees outfielder Brett Gardner said. “But it definitely had the feel of a playoff game.”

Higashioka, Brett Gardner and Judge homered off Mets starter Taijuan Walker in the second inning to put the Yankees ahead 5-0. The Mets immediately fired back with a three-run second, and Báez's solo drive in the third cut the deficit to 5-4.

Some more crazed than others.

Play was paused in the bottom of the sixth after someone seated down the right-field line threw an object into the outfield. Seconds later, a man jumped onto the field and evaded security for about 20 seconds with a series of sprints and dekes. Fans booed when he emerged, cheered when he was finally tackled and chanted “USA! USA!” as he was carried away.

Another man, this one shirtless, sprinted onto the field and interrupted play in the bottom of the eighth.

Judge’s solo shot in the second was the 150th career, making him the second faster player (552 games) to the mark in major league history behind Phillies slugger Ryan Howard (495 games).

Fans stood and cheered in the seventh when Mets shortstop Francisco Lindor dived for Higashioka's stinger and made the catch. It's been less than two weeks since Lindor apologized for his role in the team's thumbs-down celebration, which Báez admitted was a jab at fans who had booed them in Flushing.

Lindor was booed an inning later when he couldn't handle Gleyber Torres' hard one-hopper, which was ruled a hit. Báez was given an error by the scorer and an earful by the crowd after his errant throw the next at-bat let in the go-ahead run.

Yankees: RHP Gerrit Cole threw his first bullpen after leaving a start Tuesday with a tight left hamstring. New York hopes he can rejoin the rotation early next week. ... RHP Jameson Taillon still has soreness in his right ankle after partially tearing a tendon during a start Monday. ... RHP Domingo Germán (right shoulder inflammation) is slated for a minor league rehab assignment Tuesday, although the affiliate is to be determined.

The Yankees hadn't decided on a starter for Sunday's series finale, although LHP Andrew Heaney and RHP Clarke Schmidt were the most likely options. RHP Carlos Carrasco (1-2, 5.88) is up for the Mets.