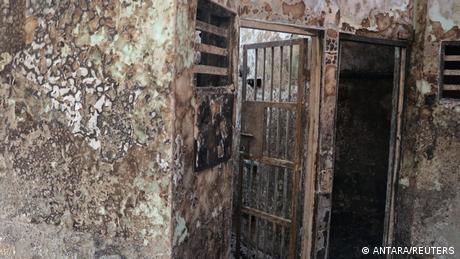 A blaze broke out at Tangerang prison near Indonesia's capital city Jakarta last week while inmates were sleeping. In total,41 prisoners died and eight others were seriously injured.

The facility houses over 2,000 inmates, exceeding its official limit of 600, according to government data. Block C, where the fire broke out, housed 122 inmates at the time ⁠— far over its intended capacity of 40.

Tangerang prison is not an exception. In Indonesia and in much of Southeast Asia, overcrowding is common. Prison populations have been boosted by overcriminalization, Usman Hamid, executive director of Amnesty International Indonesia, told DW.

Higher incarceration rates have "not been accompanied by adequately increasing and improving detention facilities," Hamid said.

Overcrowding has resulted in prisoners across Indonesia struggling in conditions that put their well-being at risk and threaten their lives, with many subjected to "treatments that amount to cruel, inhuman or degrading treatment or punishment," Hamid described.

"They may be deprived of adequate nutrition and medical care. They may not have enough ventilation and light. They may have to take it in turns to lie down to sleep because their cells are so overcrowded. Their sanitary conditions may be abysmal and a serious hazard to health. The result is mortality and serious illness in the prison population," Hamid warned.

Elsewhere in the region, inmates face similar conditions. In Thailand, which has some of the worst prison overcrowding in the world, there are around 310,000 inmates incarcerated in 143 correctional facilities nationwide — more than two times the system's official capacity, according to the country's Department of Corrections.

Thana (name changed) is a former inmate at a detention facility south of the capital Bangkok. The 30-year-old, who completed his jail term a few months ago, spoke to DW about living conditions during the incarceration.

"There was only one waist-high squat toilet for a cell with around 80-100 inmates sleeping in it," Thana said. "We slept shoulder to shoulder and end-to-end alongside other inmates." He slept like that from the first until the last day of his seven-month sentence for perjury.

"The sleeping dormitories are empty rooms. We were given three blankets. I laid out one as a mattress, rolled one for a pillow and had the third as a cover," Thana described.

The problem is even more acute in the Philippines, where "prison overcrowding is considered among the worst in the world," Rachel Chhoa-Howard, Amnesty International's Philippines researcher, told DW.

According to the Bureau of Jail Management and Penology, of the 470 jails nationwide, 356 are considered congested.

"The Quezon City jail, for example, has gained notoriety for its shockingly high levels of overcrowding where inmates are seen taking turns sleeping on staircases or on the floor of an open-air basketball court," Chhoa-Howard said.

"In the first 12 months of the coronavirus pandemic, police arrested over 100,000 people for violating quarantine rules," Chhoa-Howard told DW, who added that while Philippine authorities said in April that they would stop locking up quarantine violators, "many were still detained and thus prison overcrowding worsened."

What is causing the overcrowding of prisons?

Thailand, Indonesia and the Philippines are among the top 10 countries with the largest prison populations worldwide, according to the Institute for Crime and Policy Justice Research.

The Philippines, Thailand as well as Cambodia also rank in the top 10 of countries with overwhelmed penitentiaries, while Indonesia is ranked 22nd.

Aggressive enforcement of narcotics laws across the region is a major factor.

"A total of 80% of Thailand's prisoners are incarcerated for drug-related offences," said Phiset Sa-ardyen, executive director of the Thailand Institute of Justice.

"The drug law in Thailand has a low threshold for what is considered as presumption of intent to sell. This has resulted in a substantial increase in the number of prisoners in Thailand, leading to prison overcrowding," he added.

In the Philippines, President Rodrigo Duterte has infamously waged a war on drugs that has resulted in a major surge in prison populations.

"Over the past five years, prison overcrowding has also worsened significantly following the arrest and imprisonment of tens of thousands of people in the 'war on drugs,'" said Chhoa-Howard. "Many of those in detention are there for minor, non-violent drug-related offences."

Harsh narcotics laws are also viewed as a major driver of overcrowding in Indonesia, whose legal system favors incarcerating drug users, rather than their rehabilitation.

According to Phiset, "Thailand is moving towards addressing the root cause of prison overcrowding." In August, the Thai parliament passed a new narcotics bill "which aims to emphasize prevention and treatment and less severe punishment for small-scale drug users."

Rights groups have called on authorities to release non-violent offenders in order to reduce overcrowding, while Phiset stressed the importance of "ensuring that prison is used as a measure of last resort."

While Thailand appears to be taking steps to tackle overcrowding, Hamid is less optimistic about the situation in Indonesia.

Citing the case of a university lecturer convicted for defamation after criticizing a university's recruitment process in a Whatsapp group, Hamid said: "Overcrowding will never be solved if even the most benign disagreements and differences of opinion can result in jail time."