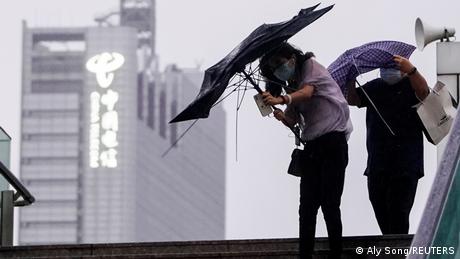 In China, Typhoon Chanthu, which had been churning towards the city of Shanghai, appeared to have stopped short of making landfall on Monday. While there has still been strong wind and heavy rain, its believed it would have been far worse had it made landfall.

The AP news agency reported that transport links have been largely restored in the populous city, after flights at both Pudong and Hongqiao airports were suspended. State affiliated media reported that both airports are operational.

As Chanthu made its approach, authorities ordered the evacuation of around 100,000 people, state media reported.

Trains and subway stations were also shut, along with schools and offices.

The system was expected to move in a northeasterly direction towards South Korea and Japan in the coming days.

Taiwan was soaked as the eye of the storm passed nearby, dropping 13 centimeters (5 inches) of rainfall.

In July Typhoon In-fa also disrupted flights and prompted evacuations in the southern part of the city.

Severe flooding caused by record rainfall in July also led to the deaths of at least 292 people in the city of Zhengzhou, in central China.