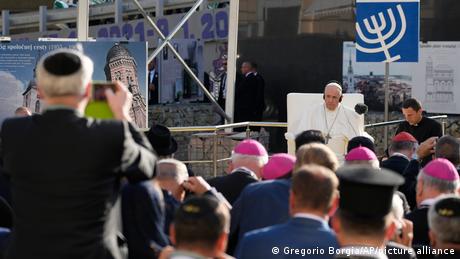 Pope Francis paid tribute on Monday to the thousands of Slovak Jews who were murdered during the Holocaust.

The comments came during the pontiff's official visit to Slovakia, and among a backdrop of tensions surrounding the Catholic Church's possible role in the atrocities of the Holocaust in Slovakia.

What did the pope say?

Speaking at a former Jewish neighborhood in the capital Bratislava, Francis sharply criticized "the frenzy of hatred" in World War II as well as continuing antisemitism.

"Here, in this place, the Name of God was dishonored," the 84-year-old pope said. The site was where the city's synagogue once stood. It survived the war, but was torn down by the communists.

During the war, Slovakia was governed by a Nazi puppet regime that was led by Catholic priest Jozef Tiso.

"Here, reflecting on the history of the Jewish people marked by this tragic affront to the most high, we admit with shame how often his ineffable name has been used for unspeakable acts of inhumanity," Francis said.

"Let us unite in condemning all violence and every form of anti-Semitism," he added.

What happened in Slovakia during WWII?

Under Tiso and his regime, all democratic parties were banned in Slovakia. He also signed several antisemitic laws and deported over 70,000 Jews to Nazi concentration camps in Germany.

The issue is a sensitive one in the Catholic Church, with many church leaders reluctant to admit the church's role in the Holocaust, news agency DPA reported, quoting former parliamentary speaker Frantisek Miklosko.

The Catholic Church has also been criticized in Slovakia for not condemning Tiso or especially distancing itself from him.

In 1947, Tiso was sentenced to death and was hanged. In the decades after the war, scholars uncovered church documents showing that the Vatican disapproved of Tiso's policies and tried to intervene to stop deportations — although the deportations resumed when Nazi troops arrived in Slovakia.

Pope Francis arrived in Slovakia on Sunday following a trip to Hungary. He will remain in Slovakia until Wednesday. It's the 84-year-old's first international trip since undergoing intestinal surgery in July.