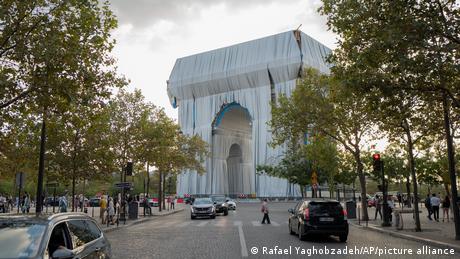 Sheathed in billowing silver-blue sheets of fabric, the Arc de Triomphe is undergoing a transformation this week as part of a posthumous art exhibit by the late artist Christo.

The 19th century arch, built by Napoleon to honor fallen soldiers, is being transformed into a shimmering, wrapped display that will be on view to the public from September 18 through October 3.

What is the art project?

Workers began unfurling sheets of recyclable plastic over the Parisian landmark on Sunday, capturing curious glances from people walking by. In total, 25,000 square meters (269,000 square feet) of fabric will be used to cover the arch.

In addition to the fabric, the project will also include 3,000 meters (9,840 feet) of red rope — which can also be recycled.

The wrapping and finalization of the design will take several days, but is slated to be finished by Saturday.

What's behind the project?

The project is the realization of a decades-long dream for Christo and Jeanne-Claude, his co-designer and wife.

Christo himself died in May last year without ever seeing the project come to fruition. The idea first came to him when he rented an apartment near the Arc de Triomphe in the 1960s.

The project is being overseen in part by his nephew Vladimir Javacheff, as well as French authorities and the Pompidou Museum.

"Today is one of the most spectacular moments of the installation. The wrapped Arc de Triomphe starts to take form and approach the vision that was a lifelong dream for Christo and Jeanne-Claude," said Javacheff on Sunday.

Christo left behind detailed plans and sketches for the installation, writing that he wanted the arch to become "like a living object stimulated by the wind and reflecting the light."

"People are going to want to touch the Arc de Triomphe," he said.

Christo, whose full name was Christo Javacheff, was born in 1935 in Bulgaria.

He moved to Paris in 1958 and began experimenting with wrapping objects in fabric and rope, creating captivating installations.

He died of natural causes at his home in New York in May 2020.