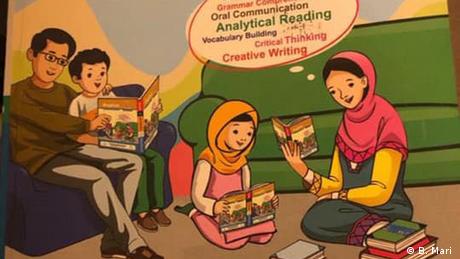 Following the recent release of the curriculum's accompanying new textbook, many have taken to social media to criticize what they view as patriarchal gender norms in the book.

The outrage is similar to criticism of the new curriculum by education experts, activists and the public who argue that it fails to promote and include gender equality, religious minorities and cultural diversity.

Women Action Forum released a statement, condemning the SNC as "based on ideological imperatives rather than pedagogical ones and will seed society with divisive thinking."

Judging a book by its cover

The cover of the Grade 5 English textbook depicts a father and son studying on a sofa, while the mother and daughter study on the floor. Both the mother and daughter are also covering their heads with a hijab and most of the covers of the textbooks show even young girls donning the hijab. Usually, girls begin wearing hijab when they reach puberty. In the same textbook, women leaders are cited as "supporters of men."

Girls and women are mainly depicted as mothers, daughters, wives and teachers. They are not included in acts of play or exercise. Only boys are seen playing and exercising, while girls are included in images where they are mere bystanders.

"Girls and women in Pakistan are excelling at sports right now. They are representing the country at the Olympics. They are climbing K2. Then why are the textbooks not reflecting this but rather excluding them from physical activity and competitive sports?" asked Baela Raza Jamil, CEO of Idara-e-Taleem-o-Aagahi (ITA) Center for Education and Awareness.

The textbooks have also drawn backlash for the depictions of head coverings for young girls and women.

Activist and sociologist Nida Kirmani told DW that the messaging around girls' clothing in the textbooks follows the messages the government has already been giving citizens about women's modesty and dress. Prime Minister Imran Khan recently caused outrage after making comments linking the rise in sexual violence to women's clothing.

"These books seem to be pushing a certain kind of dress on all girls and women but we know there exists all kinds of veiling practices in Pakistan, not just one way of dress," added Kirmani.

Ayesha Razzaque, technical advisor to the Ministry of Federal Education and Professional Training, told DW that while there are instances of women being portrayed as policewomen or pilots, it is an exception to the rule and adds to the "gendered tokenism" prevalent in the curriculum.

According to her, proponents of the SNC from the far-right are cherry-picking such examples to dismiss criticism and give credibility to an agenda in the curriculum made to appease Pakistan's religious right-wing supporters.

Razzaque argued that these stereotypical depictions exist because no gender or intersectional lens was utilized in the design of the books.

"Books that are meant to shape young minds need to have a consistent theme and tone interwoven into the curriculum, the SNC is lacking that. If a gender lens was applied at the design, we would definitely have very different messages and learning," she added.

Due to the lack of an inclusive perspective, the SNC does not reflect the "rich diversity" of Pakistan, especially when it comes to the multiplicity of women's experiences.

Justifications for the SNC by conservative groups, that Islamic countries such as Indonesia and Malaysia also depict girls and women with headscarves in their books, are surfacing.

Jamil from ITA hit back at these, telling DW that in a country like Pakistan where the female population disproportionately suffers from discriminatory customary traditions, by losing autonomy and subject to violent threats, the symbolism of head covering as a norm can lead to greater systematic violence against women.

"Where are all of us in the textbooks? Only a certain kind of Pakistani female reality is being shown and expectations of women to act that way are being reinforced. If we are to have gender parity, it has to start at a very young age," Jamil added.

Pakistan's former chair of the Higher Education Commission, Tariq Banuri, told DW that he fears that the SNC will further "confuse" the education system in the country.

He added that the lack of representation of women, religious minorities and cultural diversity poses the risk of creating more divide than bridging differences.

"We risk another generation who can't question their learning. This is an insidious problem that we are faced with," he added.

Banuri commented, "The SNC was supposed to promote creativity and critical thinking but it is instead much of the same curriculum as the past years and is not of the quality to produce a generation of free-thinkers and innovators."

He added that more privileged students will be able to offset the conservative teachings with more analytical supplements but disadvantaged students will continue to suffer from such an education.

This looks set to pose a challenge to the aim of the SNC that was envisioned under the slogan, "One Nation, One Curriculum."

The southern province of Sindh has already rejected the SNC, deeming it "haphazard" and "sexist."

Nasir Hussain Shah, provincial minister for local government, tweeted: "We rejected this SNC because of the kind of message it is giving to our country's youth. This cover is giving the wrong message putting mother and daughter on the ground. We should instead teach our future generations that women are the crowns of our society."