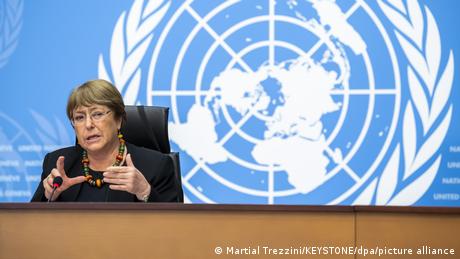 Michelle Bachelet, the UN human rights chief, blasted the Taliban in a speech Monday for a lack of inclusivity and respect for the rights of all Afghans.

She highlighted a number of broken pledges since the militant group seized power in Afghanistan on August 15.

Bachelet said Afghanistan has entered a "new and perilous" phase that has left the country's women, ethnic groups and religious communities fearful for their rights.

"Importantly, and in contradiction to assurances that the Taliban would uphold women's rights, over the past three weeks, women have instead been progressively excluded from the public sphere," she said.

She highlighted the lack of women in the new government, which is dominated by ethnic Pashtuns, as a reason for particular concern. Other promises have been broken such as amnesty for former civil servants and officials in the previous government's security services as well as a ban on house-to-house searches.

"The Taliban put out a ban on women working with aid organizations or generally working except in very in some very few spheres, like education and medical professions," said Stefan Recker, the country director of Caritas in Afghanistan, told DW.

He added that the continuing work of women in finance and aid monitoring "would be for us a prerequisite of continuing our work."

The UN high commissioner for human rights noted there are "credible allegations of reprisal killings" and arbitrary detentions of people who worked for the previous government, including some who were later "found dead."

Bachelet reiterated her call to set up a dedicated monitoring mechanism for the UN to keep a watch on the evolving rights picture in Afghanistan.

The current session of the UN human rights council lasts until October 8.