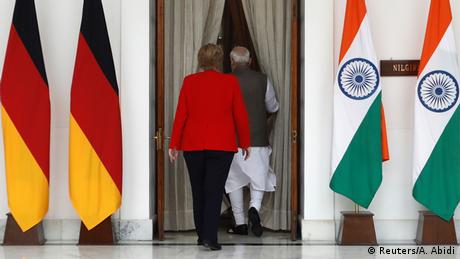 At the end of October 2019, German Chancellor Angela Merkel embarked on one of her last major international visits before the pandemic struck.

Accompanied by a dozen key government officials, as well as a high-profile business delegation, Merkel traveled to India with the specific goal to "deepen and consolidate" a relationship that has undoubtedly grown in importance since she became chancellor in 2005.

It was not Merkel’s first visit to India — in fact, she first traveled to New Delhi in 2007 and returned in each of her subsequent three terms in office.

But this final trip was an opportunity to reinforce the role Germany believed India could play in a particularly tense region, especially considering China's growing assertiveness.

By then, Germany and other European countries had already started to realize that worsening ties with Beijing required a different approach to the Indo-Pacific region — and they saw India, the world's most populous democracy, as a possible bridge.

This scenario explains, at least in part, why Germany last year presented a new Indo-Pacific Strategy. Other countries like France and the Netherlands have done the same, and in April the EU released its own blueprint for cooperation in the region.

But experts have also warned that the relationship with India must go beyond shared values and that ties have "over-promised and undelivered" for years.

Moreover, India's own democratic record has become a matter of concern, with organizations such as Freedom House stressing this year that political rights and civil liberties have deteriorated since Narendra Modi became prime minister in 2014.

The never-ending pursuit of an FTA

The relationship has mainly focused on trade: Germany is India's largest trading partner in Europe and one of the largest foreign direct investors.

Over 1,700 German companies are active in India and, directly and indirectly, provide around 400,000 jobs there. Hundreds of Indian businesses are active in Germany and have invested billions of euros in the IT, automotive and pharmaceutical sectors.

However, the long pursuit of a free trade agreement (FTA) between the EU and India has come to be seen as a major dampener. In May this year, the European Commission and the Indian government announced their intentions to resume negotiations on the FTA, which have been stalled since 2013.

It has become a symbol of the unfulfilled promises of the relationship between the EU and India.

And with Angela Merkel on her way out, it’s a challenge that will have to be taken up by her successor.

The relationship has grown in relevance beyond the economic realm, says Manisha Reuter, Asia program coordinator at the European Council on Foreign Relations.

"It’s only in the last couple of months, maybe in the last year, that the relationship has become a more strategic one," she told DW.

European leaders "recognize that the EU needs to meld its long-standing geoeconomic levers with new geopolitical tools, mixing trade and security initiatives for the first time," says John-Joseph Wilkins and Roderick Parkes in a recent commentary for the German Council on Foreign Affairs (DGAP).

The government in Berlin adopted its Indo-Pacific strategy in September 2020 — at a time when it presided over the European Council — to "set out the course for its future policy on the countries of the region."

The new strategy focuses on areas in which Germany wants to expand cooperation with the region, such as international security, tackling climate change, strengthening multilateralism and promoting the rule of law and human rights.

But experts such as Manisha Reuter point out that it's also clearly about being less dependent on China.

It's about "diversifying trade relationships and looking beyond China as this one land of promise that Germany and the EU focused on way too much in the last decade," she said.

Reuter sees a new focus on India in the context of "diversification" of German foreign policy in Asia.

Gulshan Sachdeva sees it differently: "India will give the right kind of balance for German or European relations in Asia," said Sachdeva, who chairs the Center for European Studies at Jawaharlal Nehru University.

Challenges for the era after Merkel

Turning that strategy into concrete action will be a challenge for Germany's next government, both in regard to India and for the region in general.

Berlin will have to work hand in hand with other European countries, in particular France, which has its own Indo-Pacific Strategy.

Sachdeva told DW that France will "definitely have a chance to play a leadership role for two reasons. One, it will take time for Germany to have a leader with the standing of Angela Merkel."

"Second, the overall approach of the EU of being more active in geopolitical matters, which kind of fits more into the French idea of how the EU should be shaped," he added.

John-Joseph Wilkins and Roderick Parkes, analysts with the German Council on Foreign Relations (DGAP), are less optimistic. "Brussels is not a natural partner for New Delhi," which is "primarily interested in its immediate neighborhood," they wrote in May after the EU-India summit.

And India has had plenty of challenges to deal with in the region, including its tumultuous relationship with Pakistan, its disputed border with China and more recently the crisis in Afghanistan, where India made considerable investments over the past two decades.

Moreover, concerns about India's human rights record could affect to what extent relations develop in the post-Merkel era, also when it comes to finding that balance with China.

In its 2021 Freedom of the World report, US-based NGO Freedom House pointed in this regard that "rather than serving as a champion of democratic practice and a counterweight to authoritarian influence from countries such as China, Modi and his party are tragically driving India itself toward authoritarianism."

The EU and India recently resumed a human rights dialogue that had been suspended for seven years.

But a group of international organizations asked European leaders in May to go further and "hold the Indian government to account for its human rights violations."

Another issue that could prove controversial is Germany's decision to expand its military presence in the Indo-Pacific by sending a warship there for the first time in nearly two decades.

The Bavaria set sail in August as the German government emphasized its goal to be more involved in the region and "take responsibility for maintaining the rules-based international order."

The warship aims to return to Germany in February next year.

By then, the era after Angela Merkel will probably have begun.