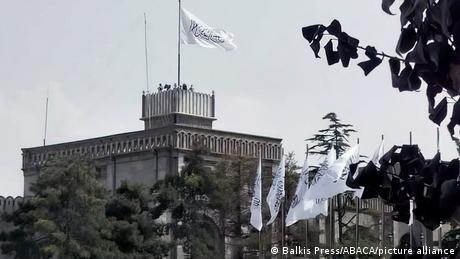 The meeting, at the presidential palace in Kabul, was the highest-level foreign delegation visit since the Taliban seized the capital last month.

"The meeting focused on bilateral relations, humanitarian assistance, economic development and interaction with the world," Taliban spokesman Suhail Shaheen said in a statement.

He said the Doha agreement, signed by the US and the Taliban, was a "landmark achievement; all sides should adhere to its implementation."

Qatar is considered one of the countries with the most influence over the Taliban. The group has maintained a political office in the Qatari capital of Doha since 2013, where peace talks with Washington were finalized.

Qatar also played a pivotal role in the massive US-led airlift of its own citizens, other Western nationals and Afghans who helped Western countries.

The Gulf Arab state has also provided technical assistance, along with Turkey, to restart Kabul airport, which was damaged by departing US troops who left on August 30.

As the West continued to face criticism of the failures that led to the Taliban's recapture of Afghanistan, NATO Secretary-General Jens Stoltenberg has defended the aims of Western powers over the past 20 years.

"Sometimes you can only prevent terrorism if you stabilize a country and create strong and reliable institutions there," Stoltenberg told Monday's edition of the German Frankfurter Allgemeine Zeitung newspaper.

He had also welcomed the goal of establishing a "more stable Afghanistan" at the time, he said.

The Taliban's first rule was ended by the 2001 US-led invasion of Afghanistan.

Washington launched military action in the wake of the 9/11 terrorist attacks, after the militants protected al-Qaeda leader Osama bin Ladan.

Mujahid, who is the deputy minister for information and culture in the new Taliban government, told DPA that police, intelligence, and other security forces have been instructed to wear uniforms while in Kabul or conducting searching operations.

Currently, the Taliban's Badri 313 unit, which is mainly responsible for security at Kabul airport, is wearing a specific uniform but most of the remaining Taliban fighters are patrolling the country in civilian clothes.

The move comes following widespread reports of alleged Taliban fighters harassing and beating people in different parts of the country, despite the announcement of a general amnesty.