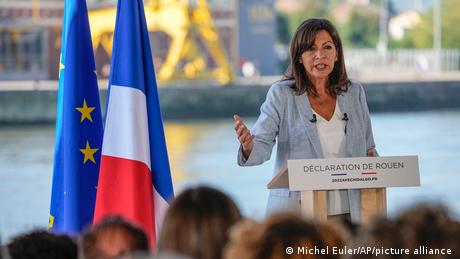 Paris' socialist mayor Anne Hidalgo said Sunday she would run for a chance to be France's first female president in 2022.

"Knowing the seriousness of our times and to give hope to our lives, I have decided to be candidate for the French presidency," Hidalgo said, as she announced her bid in the northwestern city of Rouen.

Hidalgo is not the only woman eyeing the Elysee Palace — far-right leader Marine Le Pen and center-right politician, Valerie Pecresse, have also thrown their hats into the ring.

Le Pen also launched her campaign Sunday in the southern city of Frejus with a pledge to defend French "liberty."

Who is Anne Hidalgo?

Hidalgo was a virtual unknown in 2014 when she succeeded her former mentor and boss, Bertrand Delanoe, as mayor of Paris.

The 62-year-old former labor inspector was dismissed by critics as an "apparatchik" (a blindly devoted follower of a party).

During her time in office, Hidalgo has earned a reputation as a crusader against climate change, introducing 30-kilometer per hour (19-mile per hour) speed limits across the city.

Another key achievement was the doubling of Paris' network of cycle lanes since 2015.

She also presided over a series of crises in the French capital, from a string of terror attacks to the "yellow vest" revolt of 2018 and 2019 and the fire that nearly destroyed Notre Dame cathedral.

But despite winning reelection last year, she has, at times, faced criticism over the crime rate and garbage problem in the world's most-visited city.

Residents used the #saccageparis (Trashed Paris) hashtag to post photos of rubbish piled up on the streets, dilapidated public benches and discarded scooters.

Announcing her candidacy on Sunday, Hidalgo accused President Macron of having divided society and said a guiding principle of her potential term would be respect for the planet and human dignity.

She also held out the prospect of wage increases for public sector workers.

What are Hidalgo's chances of winning?

France's Socialists have struggled to rebuild after Francois Hollande's presidency failed to reboot the economy in the wake of the 2008/9 financial crisis and the 2011 Euro debt crisis.

Hollande's failure to connect with voters helped Emmanuel Macron to redraw the political landscape in the 2017 presidential elections.

Hidalgo is among the few senior left-wing politicians to be left relatively unscathed from the upheaval.

All the same, analysts say she will need to unite France's fragmented left behind a single candidate if she has any chance of mounting a serious challenge.

Three other candidates from the left have thrown their hats in the ring, including former Economy Minister Arnaud Montebourg, who is planning to run as an independent.

The Greens, who performed well in municipal elections last year, are due to announce a runner shortly.

According to recent polls, Hidalgo would garner just 8% of votes.

When will the French presidential election take place?

The first round of the presidential election is scheduled for April 10.

Current polling suggests voters will be divided between Macron and Le Pen in the key second round of voting, due a month later.

However, Macron's chances could be affected if a probe into his government's handling of the COVID-19 pandemic goes to trial during the campaign.