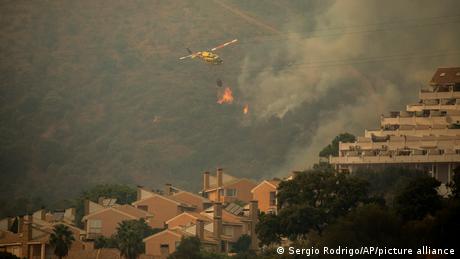 Soldiers were deployed in southeastern Spain on Sunday to join the battle against a major wildfire that is burning for the fifth day.

A military unit was traveling from the military base of Moron, near Seville, to join more than 300 firefighters and 41 water-dropping aircraft battling the flames.

The regional government in Andalusia said two more towns would be evacuated, doubling to nearly 2,000 the number of people ordered to leave their homes.

Around 500 residents of Jubrique were helped to evacuate, and 400 inhabitants of nearby Genalguacil were told to prepare to leave.

"The evacuation is taking place with maximum security measures and before a possible unfavorable evolution of the fire in that area," the regional government said in a statement.

The blaze broke out in the Sierra Bermeja mountains on Wednesday. The volcanic mountain range lies above the town of Estepona, a Mediterranean resort favored by European tourists and retirees.

The wildfire, fanned by strong winds and high late-summer temperatures, has already destroyed more than 6,000 hectares (15,000 acres) of forest.

One emergency worker was killed while trying to extinguish the blaze.

Regional environment chief Carmen Crespo said on Friday the blaze appeared to have been started deliberately and investigators were working to uncover more details.

Infoca, the agency in charge of regional firefighting efforts, described Sunday as a "key day" for bringing the blaze under control.

Wildfires are common in southern Europe during the hot, dry summer months, but have been particularly numerous around the Mediterranean this year, worsened by the intense August heat waves.

In Spain, over 75,000 hectares (186,000 acres) of forest and bush areas have burned in the first eight months of the year, according to official data.