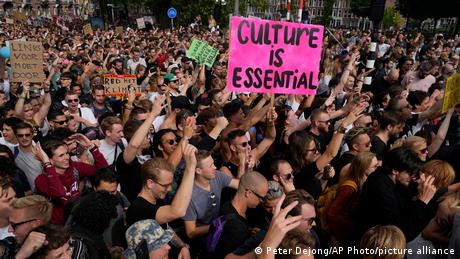 Tens of thousands of people, including many DJs and musicians, took to the streets in the Netherlands on Saturday over coronavirus restrictions on nightlife.

The Netherlands had allowed music festivals to go on and nightclubs to repoen in July. But the government reimposed restrictions on nightlife shortly after lifting them as COVID cases soared.

What do we know about the rallies?

The protest movement, which has rallied under the slogan "Unmute Us," held demonstrations in Amsterdam and other major cities.

Protesters danced next to a truck in the Dutch capital with the slogan "Give Us Back Our Safe Spaces" while another rallygoer held a banner that read "Culture Is Essential."

"We need to stand up for the events industry, which has been shut down for a year and a half," a website set up by the "Unmute Us" movement said.

The organizers claim over 150,000 people in total showed up for the demonstrations across 10 Dutch cities.

The first "Unmute Us" demonstrations were held on August 21, and drew some 70,000 participants.

Will the Dutch government soon lift restrictions on nightlife?

The Dutch government is currently deliberating whether to reopen night clubs at the end of September. The current ban is expected to last until November 1.

Dutch Prime Minister Mark Rutte is due to lay out the government's coronavirus measures for the fall during a special press conference on Tuesday.

The Netherlands is home to several famous music festivals, such as the Mysteryland electronic dance festival, which has been postponed until 2022 due to the pandemic.

A major company representing the music festivals had filed a lawsuit against the Dutch government in July over the restrictions.

Over 1,000 coronavirus cases in July were linked to the Verknipt festival held in the Dutch city of Utrecht that month.