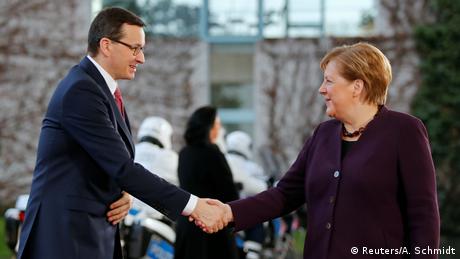 After Angela Merkel was elected chancellor of Germany in the fall of 2005, Warsaw was one of the first capitals she visited, along with Paris and Brussels. Poland had joined the European Union a year earlier. Germany was full of hope as it eyed its new partner on the right bank of the Oder River.

Sixteen years later as Merkel gets ready to leave office, everything is different. Until recently, it was not certain whether she would even make it to the Polish capital before the national elections. And, Polish President Andrzej Duda will not find time to meet Merkel on Saturday, September 11. According to his office, Poland's head of state will attend a commemorative event in Upper Silesia.

Giving Warsaw a miss after Merkel's trips to Washington, Moscow and Kyiv, would have been a blatant affront to Poland. The German chancellor is also set to travel to Belgrade, Tirana and Paris next week. The circumstances of Merkel's visit to Poland, however, reflect Germany's complicated relationship with its largest eastern neighbor.

Ever since the right-wing Law and Justice Party (PiS) came to power in Poland in the fall of 2015, German-Polish relations have been marked by tensions and misunderstandings. Only the economy has been spared from the crisis. While bilateral trade continues to break new records and Poland has risen to become one of Germany's most important trading partners, the political relationship between Berlin and Warsaw is in tatters.

All talk about being part of a community of shared interests and destinies has long been forgotten, and the German-Polish agenda is dominated by the past instead of forward-looking issues. Government representatives in Poland are again openly demanding reparation payments from Germany for war damages, even though the Polish government, unlike Greece, has not yet made any official request to that effect.

The last joint government consultations between Germany and Poland took place in Warsaw three years ago. Since then, the Polish side has been waiting in vain for an invitation to Berlin.

Kai-Olaf Lang of the German Institute for International and Security Affairs (SWP) describes the period after 2005 in German-Polish relations as "a period of great expectations and missed opportunities." While the economy and also the two societies grew increasingly closer, politics became a "dried-up landscape," the expert on eastern Europe told DW. "There is great disappointment on both sides."

Germany's liberal migration policy and the dispute over the Nord Stream 2 natural gas pipeline, which Poland vehemently opposes, have further soured relations. Lang, however, credits Merkel for the fact that things are not getting worse. He says the German leader has not been interested in escalating the dispute.

"On the German side, there is disillusionment, fatigue, even frustration, but also a pragmatic approach as well as the conviction that Poland cannot be ignored despite repeated clashes," Lang said.

"Merkel has tried to keep everyone in the EU on board. She strove to keep Poland permanently anchored in the bloc despite the pushback. She did not allow herself to be provoked, knowing full well that Poland is central to the entire architecture of the EU," Lang said.

But, what Lang considers to be a strength of Merkel's is, in the view of Piotr Buras of the European Council on Foreign Relations (ECFR), her flaw. "Afraid of a conflict with Poland and Hungary, Merkel has done too little to denounce the violation of the rule of law in both countries. Her restraint has achieved nothing and only led to escalation," the political scientist told DW.

Buras points to the anti-German sentiment fomented by both PiS politicians and the government-controlled media. Opposition politicians are shown on the covers of right-wing magazines wearing the spiked helmets once used by the German and Prussian military, cooperation with the Konrad Adenauer Foundation, associated with Merkel's ruling Christian Democratic Party (CDU), is branded as treason, and the EU Commission's actions against violations of the rule of law in Polandare portrayed as a German conspiracy and compared to wartime German occupation.

"Anti-German rhetoric is part of the identity of PiS and its electorate," Buras said, referring to recent polls that indicate growing skepticism in Poland toward Germans.

'Neither excellent, nor dramatically bad'

The PiS member of parliament, Bartlomiej Wroblewski, disagrees with the experts' pessimistic assessment. "Relations between Poland and Germany are neither excellent, nor dramatically bad. They are simply good," the national-conservative politician, who heads the Polish-German parliamentary group in the Sejm, or lower house of parliament, told DW.

"Mutual economic relations create a solid foundation, youth exchanges are developing, and municipalities are cooperating intensively. It is true, however, that we differ on essential issues of energy security or history," Wroblewski says. But he admits that "the political climate unfortunately hinders closer cooperation in other areas such as the defense industry."

Trump instead of Merkel

Despite fundamental differences of opinion, Angela Merkel, known to be a pragmatist, has repeatedly been willing to explore opportunities for a deal with Poland's ruling conservatives. After Britain, Poland's most important political partner in Europe, left the EU, the chancellor met with PiS leader Jaroslaw Kaczynski in 2016. The media was not invited.

The public did not learn of the conversation at the German government's guesthouse in Meseberg near Berlin until months later. But Poland's government was counting on Donald Trump to establish itself as a key US ally in Europe at Germany's expense. With Trump's defeat in the 2020 US presidential election, the plan failed miserably.

To secure the votes of PiS deputies for the European Parliament vote on EU Commission President Ursula von der Leyen, Merkel sent Paul Ziemiak on a secret mission to Warsaw in 2019. The Polish-born CDU secretary-general was able to persuade Kaczynski to support Ursula von der Leyen. Afterwards, none of the parties involved wanted to divulge any information about possible concessions by Berlin.

Is there a chance for pragmatic cooperation despite the crisis? Experts Lang and Buras point to climate policy and energy as vital and fundamental issues that should be tackled jointly by Poland and Germany. "However, this requires political will," Piotr Buras said. "And that is currently lacking."