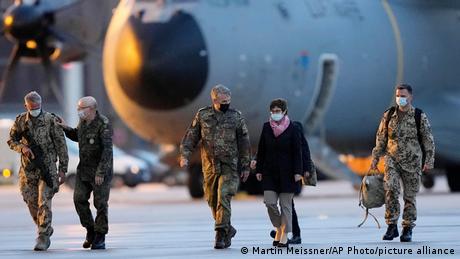 In an interview with DW, Kramp-Karrenbauer said talks with the Islamist group had "nothing to do with diplomatic recognition" of their regime in Kabul. However, such talks were needed in order to restart evacuations out of the war-torn country.

Her comments come just hours after DW, Germany's international broadcaster, confirmed that its journalists and their families had been able to leave Afghanistan via Pakistan.

Evacuation flights from Kabul were halted last week as the US finished pulling out its last remaining troops.

On Thursday, however, some 200 foreigners took a commercial flight from Kabul to Doha — the first such large-scale departure under Taliban control of Kabul airport. The departure sparked fresh hopes that regular flights could restart soon.

Germany and other Western countries have ruled out formal recognition of the Taliban government until they make commitments over human rights — especially the treatment of women — and the fight against terrorism.

However, the United Nations has warned that the halting of development aid could backfire as the Afghan economy is on the brink of collapse.

Keeping an eye on Afghanistan

Speaking on the eve of the 20th anniversary of the 9/11 attacks on New York and Washington DC, Kramp-Karrenbauer said that "Islamist terrorism, in particular, is a real scourge of humanity." She called for monitoring Afghanistan under Taliban rule and "politically" curbing the creation of any new hotbeds of international terrorism.

Concerns in the international community are growing after the Taliban announced an interim government made up of mainly ethnic Pashtun men, including Islamist hardliners and some wanted by the US on terrorism charges.

The Taliban include factions like the Haqqani Network, which is deeply tied to al-Qaeda, terrorism expert Peter Neumann told DW.

"The fact that the leader of the Haqqani network is now Afghanistan's interior minister is the worst possible signal you can send to the international community," he added.

It was still impossible to predict which faction would have the upper hand, said Neumann, who is also an adviser to Armin Laschet, the center-right conservatives candidate for German chancellor.

"I very much hope it will be the pragmatists, but at this point, I don't think we can exclude the possibility that Afghanistan will again become a safe haven for al Qaeda or ISIS," he told DW.