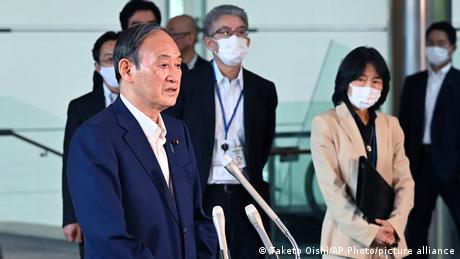 Yoshihide Suga's failure to stay on as prime ministerof Japan much beyond a single year has triggered concern that the nation is edging back towards an era of political uncertainty and upheaval.

Tokyo has been unsettled by the prospect of a revolving door of leaders, each with insufficient time to implement effective change.

Suga took over from Shinzo Abe on September 16 last year. It was widely anticipated that he would continue many of the policies that had kept Abe in power for a record seven years and 266 days and that the incoming leader's popularity with the voting public would remain steady.

The initial signs were promising for Suga, who was championed by his immediate predecessor and arrived in office with a rate of 65% support.

That impressive lead in the polls was quickly reduced, however, amid the Japanese public's reaction to the delayed coronavirus vaccine rollout.

Suga's support fell to just 26% in the final poll before his resignation.

It was a weary-looking Suga who announced on September 3 that he would not seek reelection as leader of the ruling Liberal Democratic Party when its members vote on September 29 for their new party president.

Five politicians have already thrown their hat into the ring for the leadership of the party, which will also bring with it the position of prime minister.

Too many problems for one leader

The concern is that whoever wins the election will find the problems that bedevil Japan similarly difficult to surmount. And failure to achieve measurable improvements will end with the leader once again being forced out of office. Japan is still facing the ongoing pandemic, an accompanying economic downturn,falling incomes, widening social disparity and long-term structural issues such as a contracting population.

"The absolute worst-case scenario, for the political situation and the country in general, is that whoever is elected later this month is unable to quickly improve the lives of the ordinary people and that the pandemic continues to linger and more companies go out of business," Go Ito, a professor of politics at Tokyo's Meiji University, told DW.

"The new prime minister is then faced very quickly with two elections, one in November for the lower house and another for the upper house in July," he added. "If the public does not see positive change by the second of those elections, then he or she will undoubtedly struggle."

"We are very close to going back to the situation we had in the past, with a prime minister only lasting for about a year before they are forced out, either by a party concerned by falling support or by the public at the ballot box."

Past leaders have not set a hopeful precedent, however. Before Shinzo Abe became prime minister for a second time, in December 2012, his six immediate predecessors could each only cling to office for a year.

Yukio Hatoyama served the shortest amount of time, with just 266 days in office. Abe is included on that list, with his first administration surviving one year and a day before he stepped down due to ill health brought on by the pressures of the job.

Since Japan's wartime defeat in 1945, only five prime ministers have remained in office for five years or more.

"It's true that staying in power is perhaps harder for a Japanese leader than in other countries because of the factional nature of the different parties, with groups all jostling to have their own person as the leader, but it is reaching the point where that is potentially dangerous for the stability of the nation," said Ito.

Hiromi Murakami, a professor of political science at the Tokyo campus of Temple University, is similarly concerned that Japan is about to experience a period of political turbulence, but she is also optimistic that it might finally usher out the powerful "old guard" and enable younger politicians to come to the fore.

"There is a very real risk of returning to the old days of a prime minister lasting only a year or so and not being able to achieve very much in that time," Murakami told DW. "But I'm actually slightly optimistic because the last couple of years have really shown us all the vulnerabilities of Japan's existing systems, in health care, education, society in general and in the political realm."

Opening the door to a new generation in politics

That optimism is encouraged by a number of relatively young members of the National Diet (Japan's legislature) who have put themselves forward for the post of prime minister, she said.

Taro Kono, the minister for administrative reform, is the front-runner in the race and is just 58 years old –– young for a Japanese politician. Fumio Kishida, a former foreign minister, is 64 –– the same age as former Defense Minister Shigeru Ishiba, while Sanae Takaichi, the only woman bidding for the post, is 60.

"I'm hoping this election will serve as a transition," said Murakami. "This is the political world's chance to move away from decisions all being made by older men in backroom deals."

"This could be the time for a younger generation of political leaders to emerge and break the rules of the old system," she said. "The old guard in Japanese politics is probably quite afraid at the moment because their influence is weakening, but it is almost certainly what is best for the country."