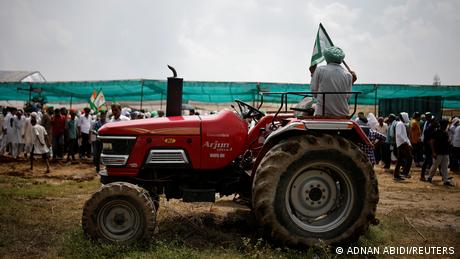 Thousands of farmers gathered at a grain market outside the Indian capital New Delhi this week in protest against new market-friendly agriculture laws that they say threaten their livelihoods.

It came after another rally on Sunday involving tens of thousands of farmers vowing to remain defiant against the government over the controversial measures.

These rallies proved some of the biggest to date since farmers — largely from the northern states of Punjab, Haryana and Uttar Pradesh — trooped along the borders of the national capital to protest against agricultural bills passed by India's parliament in September last year.

"What this rally signifies is that we are ready to expand, deepen and intensify our movement," Darshan Pal, who heads the Krantikari Kisan Union, told DW.

What are the protests about?

In September 2020, India's parliament passed three controversial agriculture bills aimed at liberalizing the country's farm sector. They were subsequently signed into law by the president, sparking farmers' protests across the country.

The government argued that the new laws will give freedom to farmers to sell their produce outside regulated markets and enter into contracts with buyers at a pre-agreed price.

The ruling Bharatiya Janata Party (BJP) insists that the laws will fetch better prices and free farmers from traditional middlemen who dominate the trade. The government hopes that its new policy will double farmers' income by 2022.

Farmers' associations say the legislation does not guarantee the acquisition of farm produce through state-run organizations that guarantee a minimum support price (MSP), thus leaving them at the mercy of corporations that are now expected to enter the country's troubled farming sector.

Opposition parties and even some allies of Prime Minister Narendra Modi have called the laws anti-farmer and pro-corporation and called on the government to accept the farmers' demand to roll them back.

Several rounds of negotiations between the government and farm unions have failed to resolve the stand-off.

For more than eight months, tens of thousands of farmers have camped on major highways to New Delhi demanding the government repeal the laws.

Observers like Indra Shekhar Singh, an independent agriculture policy analyst, say the ongoing farmers' protests could transform into a vibrant political force, providing space for new politics to emerge that's rooted in agriculture and the environment.

"It clearly indicates the political clout of the farmers' movement and its role as the opposition in the country. Even if they don't enter electoral politics directly, they have created a new pressure group and laid the foundations for green politics," Singh told DW.

"The strong attendance at events and their growing numbers have moulded the farmers into a formidable political class. This has laid a strong foundation for a long agitation," he added.

The protests have posed one of the major challenges to Prime Minister Narendra Modi's government so far. Experts point out that the farmer community is a powerful constituency that the government cannot afford to alienate.

About two-thirds of India's 1.3 billion population draw their livelihood from farming and the sector has long been a political minefield.

The massive protests come ahead of crucial polls next year in India's most populous state Uttar Pradesh, home to 200 million people and governed by Modi's BJP.

"Obviously, the government is shaken by these events. These protests have sent out a strong message that our resolve is further strengthened, and we cannot be ignored," Ketki Singh, vice president of the Bhartiya Kisan Union's women's wing, told DW.