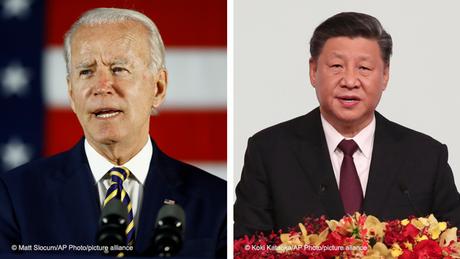 US President Joe Biden spoke on the phone with Chinese President Xi Jinping for the first time in seven months on Thursday.

The US and China look to be attempting to mend fences, in what appears to be a break from the past few years of strained relations.

The leaders to the world's two largest economies held a conversation focusing on relations between the two countries and areas of mutual concern, the White House said.

What did the White House say?

With the two countries entangled in a trade war, Biden's message in the call was that "we don't have any situation in the future where we veer into unintended conflict," an administration official told reporters.

Biden spoke of the US interest for peace, stability and prosperity in the Indo-Pacific region and across the globe.

After relations deteriorated under previous president Donald Trump, Biden urged for multilateralism and an end to the "America First" ideology. However, he has kept trade tariffs in place and has been tough on areas of disagreement with the Far Eastern economic superpower.

According to a statement, the White House said the presidents had "a broad and strategic discussion," agreeing to engage "openly and straightforwardly."

They spoke of common areas like the coronavirus pandemic and climate change with Biden bringing up concerns over Chinese involvement in cyberattacks.

It emphasized the need for "guardrails" to make sure the relationship is "managed responsibly and US actions were not "misinterpreted."

What did Xi tell Biden?

Xi stressed the importance of cooperation from both sides in the call and said there were "possibilities" of an "an improvement of China-U.S. relations," according to a Chinese government statement.

The Chinese statement emphasized the need to work together on many issues and shoulder their obligations as permanent members of the United Nations security council.

However, Beijing also called on the US to "respect China's core interests and act prudently" on what it called "internal affairs" like Hong Kong, Taiwan and Xinjiang.

According to Chinese state media, the conversation was "candid" and "in-depth" and the discussion focused on issues of mutual concern. It addressed the leaders' wish for world peace and developmentthrough "constructive dialogue" to send "a positive signal to the world."