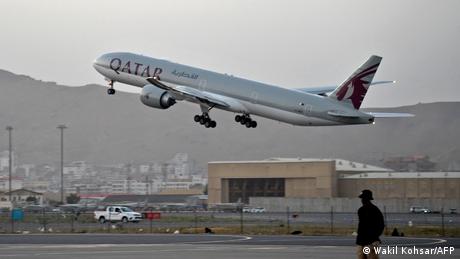 Americans and dozens took off on a Qatar Airways flight bound for Doha on Thursday, the first time an international flight will depart the Kabul airport since the US withdrawal from Afghanistan last month.

Qatari officials said Thursday Taliban authorities permitted a flight out of Kabul for passengers who had the proper documents. The officials added that the flight would carry between 100-150 Americans and other Westerners.

It is the first commercial flight from Kabul since the airport shuttered with the US withdrawal late last month. The closure marked the end of a frantic airlift conducted by the US and other NATO allies in an effort to evacuate their citizens and Afghan allies at risk of retaliation from the Taliban.

Footage on Doha-based broadcaster Al-Jazeera on Thursday showed people at the airport, including women, children and elderly passengers all with luggage. A Canadian man told the Arab satellite network that he was grateful to the Qataris.

The network later broadcast footage of the plane taking off.

While the Taliban have said people could continue to leave Afghanistan after the US withdrawal, in recent days charter flights attempting to depart the northern Afghan city of Mazar-i-Sharif have been held up by the Islamist militant group now in control of the country.

The US has said approximately 100 Americans remain in Kabul, as well as thousands of Afghan allies and their families who did not manage to make it out.