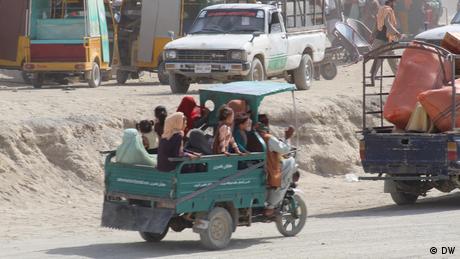 Khalid Shinwari, 25, is more than relieved after managing to flee Taliban-controlled Afghanistan and reaching Pakistan in recent days.

A father of three, Shinwari's family first moved to Pakistan during the Afghan civil war of the 1990s that brought the Taliban to power.

"My father then thought that Pakistan would be a safe place to come to, given the volatile situation in Afghanistan," he said, adding that his family had settled in Kohat. "We spent several years in that city working hard day and night."

By 2007, the situation in Afghanistan stabilized and a lot of investment began coming into the country, leading to faster economic growth and booming business, Shinwari said.

"Then we decided to move back to our country," he told DW. His family had been happy to be back in their homeland despite the turmoil in parts of the country, he said.

"I started working in a Kabul restaurant baking bread and earning enough to support my family that was living in Nangarhar. My family was doing well, with all brothers saving enough money to construct a house."

'They are all concerned about their daughters'

But the collapse of the Afghan civilian government and the swift takeover of the country by the Taliban last month frightened Shinwari's family.

"There were rumors in the areas adjacent to ours that the Taliban would demand girls. I have four sisters, two of them unmarried. We undertook an arduous journey to save these two unmarried sisters."

"I did not want them to be forced to marry Taliban fighters," he said. Leaving his ancestral house was painful, he stressed, but he had to take that step for the sake of his two sisters.

Narrating the ordeal he underwent while traveling to Pakistan, he said: "We walked for three days, paying different transport guys who took away our money and fled. We left everything at our house and now live in Rawalpindi. I am working at a restaurant while my other brothers are also working. We are happy that our sisters are safe now."

Vegetable seller Tariq Khan, who also hails from Nangarhar, said he left the country as he was worried about the safety of his 10-year-old daughter. "I did not want these militants to cast an evil eye on my daughter. Fearing for the safety of my daughter, I came here when the Taliban were conquering rural areas."

"They are all concerned about their daughters, fearing that the Taliban would definitely ask them to marry off the girls with their militants."

Khan says his family call him every now and then, pleading to make arrangements for their travel to Pakistan. "But the borders are closed, how can I do anything for them?"

'Casting an evil eye on women'

Syed Muhammad Ullah, a young man from Jaghori district of Ghazni province, used to run a gym in his hometown. He told DW that rumors were rife that the Taliban were collecting information about unmarried girls and widows.

"It is not only a rumor. It is correct that the Taliban have collected information about the girls and widows. This frightened many families, who then migrated to Pakistan."

Anwar Hussaini, an ethnic Hazara from the same district, said that he did not personally witness this. "But we had to flee because we were worried about our daughters and family members. Since the Taliban entered my area, my son has been missing."

His daughter, Fariba Hussaini, said that since she was a teacher working for an NGO, she had to flee along with her family members to avoid the wrath of the militants.

In recent days, there have been reports of some Pakistani women, who are married to Afghan men, returning from Afghanistan's Badakhshan province to Pakistan's northern Gilgit-Baltistan region, accompanied by their husbands' sisters and other women, fearing that these unmarried girls could be forced to marry Taliban fighters.

A spokesman for the Gilgit-Baltistan government, Ali Taj, confirmed that around 55 families, including women who are married to Afghans, have returned to the region. However, he told DW that the women have returned due to the uncertain security situation in the war-ravaged nation.

Many more planning to escape

Afghan citizens who fled to Pakistan say that the Taliban's assurances cannot be trusted.

"There is much fear among the people in general, and among non-Pashtuns in particular because of the past of the militants," said Syed Muhammad Ullah, showing his swollen elbow caused by the militants hitting him with their weapons.

Anwar Hussaini and his family members burst into tears while talking about their missing son, who they believe was taken away by the Taliban. The family of six is now cramped into a small room in an area of Islamabad.

Hazara activists say more than 7,000 members of their community have arrived in Pakistan in the last few weeks. Many of them are planning to go to other countries fromt here, said one of the activists who asked not to be named.