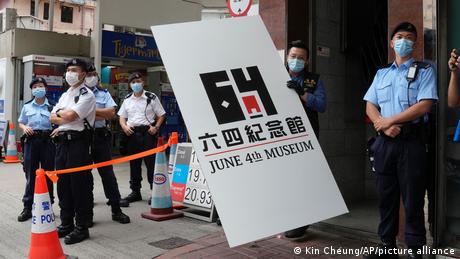 Hong Kong police on Thursday raided a museum dedicated to the victims of China's 1989 crackdown on pro-democracy protesters in and around Beijing's Tiananmen Square.

Officers of the newly created national security unit carted away artwork, documents and exhibits from the museum as evidence.

Police seized a giant logo of the museum and photos of the huge candlelight vigils that Hong Kong activists had held for Tiananmen's victims, as well as a paper model of the Goddess of Democracy — a symbol of the 1989 pro-democracy student movement in Beijing.

The museum was closed this year as authorities were investigating a lack of appropriate licenses, and the group running it was fined 8,000 Hong Kong dollars ($1,000, €847).

The museum is run by the Hong Kong Alliance group, which had organized Tiananmen Square vigils in the city.

The group had been accused of working as a "foreign agent," and authorities had questioned its operational and financial information.

It is seen as the latest target of a sweeping national security law that Beijing imposed on Hong Kong.

Several members of the Hong Kong Alliance are already in jail on national security charges.

On Thursday, 12 democracy activists pleaded guilty to unauthorized assembly charges over the Tiananmen vigil in 2020, which was the first one banned by authorities since 1990.

The alliance's jailed vice-chairman Albert Ho was among them. He said he rejected the "foreign agents" accusation, and that local groups supporting democracy had formed the alliance.

"We were driven by our consciences and moral commitment to make our best endeavors to maintain this historic tradition of commemorating June 4th, remembering the lesson of history and speaking truth to power," he said.

Yeung Sum, a former lawmaker and one of the 12 who pleaded guilty, said they would continue to fight for democracy.

"The June 4 candlelight vigil may be banned forever... but the flowers of liberty will blossom regardless of the storm. Hong Kong people will continue to seek our way to democracy and freedom."