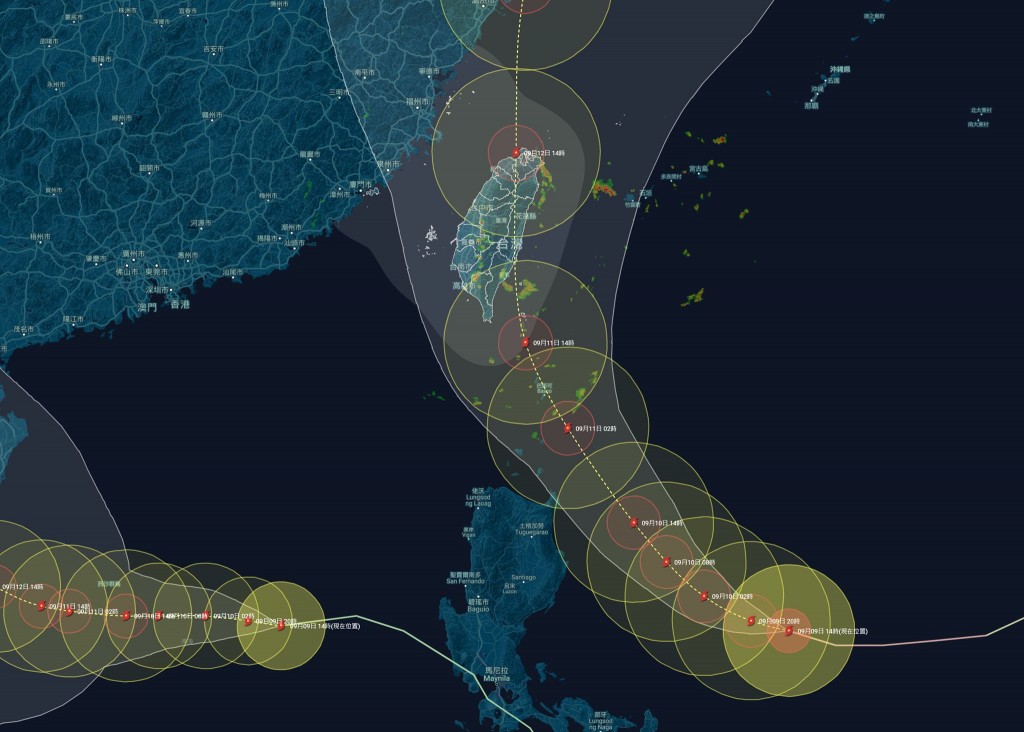 TAIPEI (Taiwan News) — The trajectory of Super Typhoon Chanthu (璨樹) shifted north this afternoon (Sept. 9), now putting it on a direct collision course with Taiwan, with the Central Weather Bureau (CWB) possibly issuing a sea warning as soon as this evening.

As of 2 p.m., Typhoon Chanthu was about 980 kilometers southeast of Taiwan's southernmost tip of Eluanbi, moving west-northwest at a speed of 15 kilometers per hour (kph). It had a radius of 150 km and was packing maximum sustained winds of 190 kph and gusts of up to 234 kph, the CWB reported.

According to the CWB's latest model, Chanthu is on a path to make landfall in Taiwan, with it currently appearing possible that the storm's eyewall could pass directly over the country. Wu Wan-hua (伍婉華), a senior specialist at the CWB, said that Chanthu's path depends on when a pacific high-pressure ridge will weaken and retreat east, drawing the typhoon north.

Wu said the degree and timing of the high-pressure system's weakening is leading to rapid back and forth fluctuations in the weather models of various countries. He said the CWB will continue to closely observe the situation and provide updates on the latest adjustments to Chanthu's predicted course.

A sea warning could be issued at some point between this evening and Friday morning, said Wu. As for a land warning, Wu said there are still many variables to consider if and when such an alert will be issued.

He predicted that the super cyclone will come closest to Taiwan between Saturday (Sept. 11) and Sunday. The storm is expected to reach the Bashi Channel on Saturday, bringing showers and thunderstorms to eastern and southern Taiwan.

Heavy rain will be likely in southeast Taiwan and the Hengchun Peninsula. Meanwhile, central Taiwan and areas north will remain hot, with afternoon thunderstorms in the mountains.

By Sunday, Wu said all of Taiwan will feel the brunt of Chanthu, bringing unstable weather across the nation. Showers, thunderstorms, heavy rain, and localized torrential downpours are possible throughout the country that day.