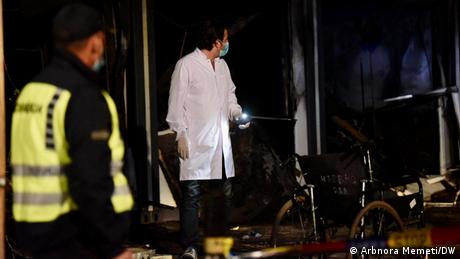 At least 10 people have been killed and many more injured after a fire broke at a hospital set up for COVID-19 patients in Tetovo, North Macedonia.

The country's Health Minister Venko Filipce confirmed the deaths on Twitter, saying: "A terrible accident has happened in Tetovo. At the moment, 10 people are confirmed to have died, but that number could rise."

Fire services raced to the scene around 9 p.m. local time (1900 UTC), and fought to douse the flames for a couple of hours.

According to the Health Ministry, injured medical personnel and patients were being taken to hospitals in the capital city, Skopje which lies 45 kilometers (28 miles) to the east.

Claims of a blast at the site of the fire

While the cause of the fire has yet to be established, the country's Prime Minister Zoran Zaev posted on social media that the fire had followed an on-site explosion.

"The fire was huge because the hospital is modular, there was plastic," Tetovo deputy fire chief Saso Trajcevski told local television.

Investigators have gone to the scene to determine the cause of Wednesday's fire.

North Macedonia has been battling a surge in COVID-19 cases recently. There have been 701 new infections and 24 deaths in the past 24 hours.

The government has had to impose stricter measures as a result.