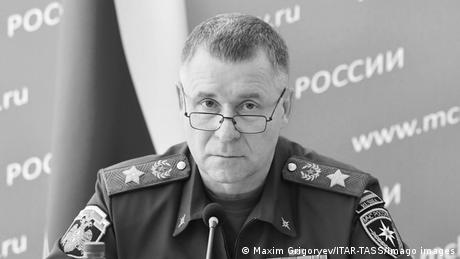 A Russian minister died on Wednesday during training exercises in the Arctic, his ministry said in a statement.

Close Putin ally Yevgeny Zinichev — who had headed the high-profile emergencies ministry since 2018 — was in the remote city of Norilsk to oversee large-scale training exercises.

The 55-year-old Zinichev reportedly "fell off a high cliff into a mountainous river" in the remote city of Norilsk while trying to save the life of filmmaker Alexander Melnik.

Melnik also died in the accident. The filmmaker was in Norilsk to shoot a documentary about the Arctic and the Northern Sea Route.

"He and the cameraman were standing at the edge of a cliff," Margarita Simonyan, the editor-in-chief of the state-run RT news outlet said, referring to Zinichev and Melnik.

"The cameraman slipped and fell... Before anyone even figured out what happened, Zinichev jumped into the water after the fallen person and crashed against a protruding rock," Simonyan added.

The Emergency Situations Ministry was staging drills to prepare for potential rescue scenarios in the Arctic region.

Russian President Vladimir Putin sends his "deepest condolences over the tragic death," a Kremlin spokesperson said after the accident.

Zinichev became emergency situations minister in 2018. He previously served as the deputy director of the Federal Security Service from 2016 to 2018 and the acting governor of the Kaliningrad Oblast exclave region in 2016.

He was also a member of Putin's security detail between 2006 and 2015. During the USSR era, he worked as KGB officer and was involved with the Soviet Navy.

Zinichev, a St. Petersburg native, was married and had a son, along with several grandchildren.

"We have lost a true military officer, a comrade, a person of great inner strength and courage and bravery close to all of us. For me, this is an irreparable personal loss," Putin said in a note to Zinichev's family.