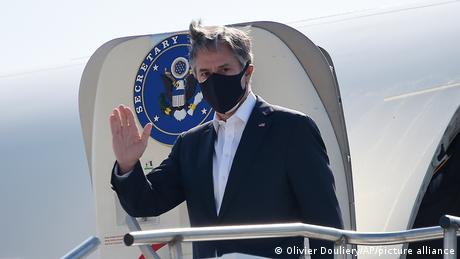 German Foreign Minister Heiko Maas and US Secretary of State Antony Blinken are meeting Wednesday at the Ramstein Air Base in western Germany.

The US base has been a processing hub for thousands of evacuees during the massive airlift from Afghanistan. Around 34,000 people were flown for layovers to Ramstein.

The two countries have sought to continue evacuating their citizens and Afghan allies out of Afghanistan after the US troop withdrawal.

Maas and Blinken's meeting also comes as Western governments weigh how to deal with the new Taliban regime in Afghanistan.

What is on the agenda?

The two diplomats are set to hold bilateral talks before a virtual meeting with other foreign ministers and NATO Secretary-General Jens Stoltenberg.

Maas said the goal of Wednesday's meeting was "to clarify what a joint approach toward the Taliban can look like."

"The people of Afghanistan are not to blame for the Taliban coming to power. And they do not deserve to have the international community turn away now," Maas said in a statement.

The top German diplomat warned that a threefold humanitarian crisis was looming in Afghanistan due to hunger, the lack of aid from international relief groups and the volatile political situation with the new Taliban regime in Kabul.

"And if a new government is not able to keep the affairs of state running, there is a threat of economic collapse after the political one — with even more drastic humanitarian consequences," Maas warned.

What is the situation in Afghanistan?

Thousands of Afghans have fled their country since the Taliban takeover.

On Tuesday, the Taliban announced a caretaker government in Afghanistan. The Islamist hardline militants appointed longtime leaders in the Taliban power structure, despite their recent bids to indicate a more moderate approach in future.

They had also claimed victory in the northeastern Panjshir province — the last Afghan region still holding out against their rule. However, resistance forces said the fighting was still ongoing.

"The announcement of a transitional government without the participation of other groups and yesterday's violence against demonstrators and journalists in Kabul are not signals that give cause for optimism," Maas said before meeting his meeting with Blinken.