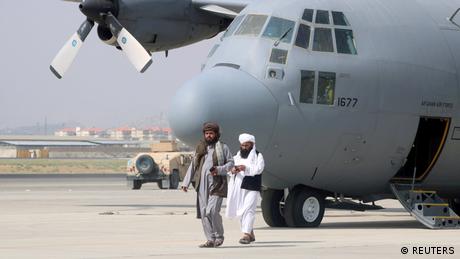 US Secretary of State Antony Blinken said on Tuesday that Washington was working with the Taliban to facilitate additional charter flights from the Afghan capital.

The US and NATO allies have hoped to continue evacuating their citizens and at-risk Afghans after the fundamentalist group seized power and foreign troops left the country.

What did Blinken say?

Speaking at a joint news conference with Qatar's top diplomats and defense officials, Blinken said the US had been in contact with the Taliban "in recent hours" over arrangements for additional charter flights from Kabul.

Blinken said members of the Taliban had said they would allow people with travel documents to depart Afghanistan freely.

"The entire international community is looking to the Taliban to uphold that commitment," Blinken said, referring to a UN Security Council resolution that urged safe passage.

Who is in charge of the Kabul airport?

After US forces withdrew from Afghanistan on August 30, the Taliban took over the airport, which has been largely closed since then.

Qatar, where the Taliban have their international diplomatic base, has been in talks with the Islamist group over Kabul airport's reopening.

Qatar's Foreign Minister Sheikh Mohammed bin Abdulrahman al-Thani said on Tuesday he hoped the airport would be open again for passengers in the next few days.

The top Qatari diplomat said, however, there has been no agreement on how the airport would be run.

Are there still US citizens in Afghanistan?

Washington believes there are "somewhere around 100" US citizens still in Afghanistan who want to leave, Blinken said.

On Monday, the US evacuated four American citizens from Afghanistan via a land route — the first departures arranged by Washington since the military pullout.

NGOs say that hundreds of people, including US citizens, are stuck at the airport in the northern city of Mazar-i-Sharif.

But Blinken denied a "hostage-like" situation in Mazar-i-Sharif, saying that some passengers did not have their travel documents.

What is the situation in Afghanistan?

Hundreds of protesters took to the streets of Kabul on Tuesday in demonstrations against the Taliban and Pakistani involvement in Afghanistan.

Taliban gunmen fired shots in the air to disperse protesters shouting slogans such as "Long live the resistance!"

On Monday, the Taliban claimed victory in the northeastern Panjshir province — the last Afghan region still holding out against their rule but resistance forces in Panjshir said the fighting was still ongoing.