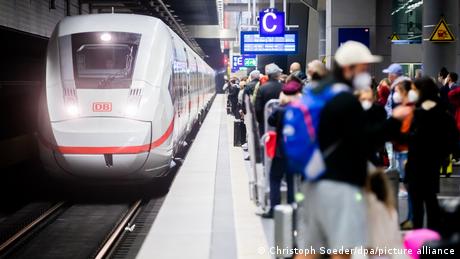 German rail travel was gradually returning to normal on Tuesday as a strike lasting more than five days ended.

The action, which severely disrupted the service of the state-run rail operator, ended at 2 a.m. local time (0000 GMT) on Tuesday.

Though normal service would not resume immediately, a Deutsche Bahn (DB) spokeswoman confirmed that the operator was working quickly to restore smooth operations on all lines.

Travelers were urged to check the trains they have booked on the internet or via the DB Navigator app.

DB said that at the weekend that roughly 19,700 train drivers in total had participated since the industrial action started on September 1 for freight services, with passenger operations following suit on the following day.

A skeleton service of regional, long-distance and freight trains did, however, remain operational during the strike.

The GDL trade union, whose members are mainly but not exclusively train drivers, orchestrated the walkout.

DB tried, but failed, to block the action

The GDL, which also held two strikes in August, is demanding a 3.2% increase in pay for drivers over a 28-month period, as well as a coronavirus bonus. Deutsche Bahn has almost matched the demand, albeit asking for 36 months to adjust pay.

The union strike, which began last Thursday, was the third in a few weeks — and the second-longest ever affecting German trains.

Germany's national rail company had gone to court to stop the industrial action, accusing the GDL of pursuing political aims rather than an improvement of working conditions.

Two courts, however, disagreed and ruled that the September strike could go ahead.

On Monday, GDL chief Claus Weselsky rejected further negotiations with DB if it did not present a "negotiable offer."

Weselsky said the company had tried to restrict the union's freedom of association, which he said was nonnegotiable.

Although Deutsche Bahn had offered salary increases totaling 3.2%, it had also tried to limit the GDL membership to certain occupational groups, Weselsky said.

Weselsky wants the GDL to represent more rail employees, including in infrastructure and administration — who are traditionally part of the railway and transport union (EVG). This would increase the revenues and influence of his union.

He said there was nothing to negotiate if DB "permanently limits us to train drivers, train attendants, on-board caterers, and thus prevents us from actually reaching the majority" of the company.

"After the strike is before the strike," Weselsky said, paraphrasing a German football saying used to mean that the preparations for the next match begin immediately after the previous one.

The German Federation of Small and Medium-Sized Businesses (BMVW) called on the government to intervene in the dispute.

"Therefore, the federal government must now put its foot down," he said, slamming the GDL's "blackmailing behavior."

The union was doing "a disservice to the autonomy of collective bargaining," he said.