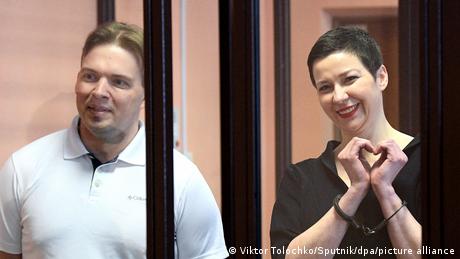 Kolesnikova became one of the most prominent faces of the country's opposition last summer after presidential elections that many saw as unfair sparked mass protests. After an unsuccessful attempt to expel the now 39-year-old from the country in early September — she tore up her passport — she was thrown in jail.

Reactions to the verdicts both in Germany and the wider EU were very clear in their condemnation.

"For us, the sentences are emblematic of the ruthless actions, repression and intimidation carried out by the Belarusian regime against opposition politicians and civil society," said Andrea Sasse, a spokeswoman with the German Foreign Ministry.

"Kolesnikova and Maxim Znak have stood up for democracy and human rights as two of the most courageous heads of the protest movement following the rigged presidential elections," Sasse said. She said that the German government condemned "the unjustified sentences" against the two and "the instrumentalization of the judiciary for political persecution in Belarus" — the trial of Kolesnikova and Znak took place behind closed doors and was viewed by many as a farce.

"Germany assures Maria Kolesnikova, Maxim Znak and everyone else imprisoned in Belarus for political reasons of its full solidarity," Sasse added.

Berlin demanded the release of all political prisoners in Belarus and promised to keep up the pressure on the Lukashenko government. But DW was unable to receive any concrete details on what additional measures were planned.

The European Commission, too, condemned the Minsk regime's "disrespect for human rights and fundamental freedoms" and the judiciary's crackdown on "symbolic figures of the Belarusian democracy movement."

Miriam Lexmann, a member of the European Parliament from Slovakia, told DW: "My thoughts and prayers are with Maria Kolesnikova and Maxim Znak and with all of the 659 political prisoners held by the regime in unacceptable conditions."

The human rights organization "Amnesty International" weighed in on the verdict as well, calling it "despotic."

Claudia Roth, a prominent German Green Party politician and Maria Kolesnikova's political "godmother," also had strong words for Monday's verdict. In a written statement given to DW, she said, "This tyrannical regime now wants to lock away opposition figures for a whole 11 years. This again shows that Lukashenko will not shy away from any kind of repression to stifle the democracy movement." Roth, who is the vice president of the Bundestag, described the two opposition figures as "thorns in the side of Belarusian dictator Lukashenko."

She called not only on Berlin but also on the EU to ramp up the pressure on the Lukashenko regime to release them. "Political pressure should also include tightening EU sanctions and finally becoming a safe haven for persecuted opposition figures," Roth said.

The leader of Germany's center-left Social Democrats (SPD), Saskia Esken, also expressed outrage at the verdicts. "Dictatorships that trample on human rights need to feel the pressure both diplomatically and via sanctions," she told DW.

The trial began behind closed doors on August 4. The charges leveled against the opposition figures were serious: conspiring to seize power illegally, damaging state security, and extremism. Earlier, former presidential candidate Viktor Barbariko, whose election staff Maria Kolesnikova headed, had been sentenced to 14 years in prison.

Znak and Kolesnikova were shown only briefly on Belarusian television at the sentencing: Kolesnikova made her famous trademark heart sign with her hands, but this time in handcuffs.

Only lawyers and a few relatives were allowed into the courtroom. Supporters and Western diplomats had to stay outside. The courtroom was full of strangers, Znak's father said following the verdict.

"Maxim and Masha didn't feel like defendants. This won't affect them. They were more worried for us, about how we, their parents, would cope," Maria Kolesnikov's father, Alexandr, said following the sentencing. Describing the verdict, he said: "Let's put it this way: unjust."

Znak's father called his son's sentence a "massive penalty" and said he still needed time to "process it." Maxim Znak's lawyer has already announced that an appeal will be lodged.