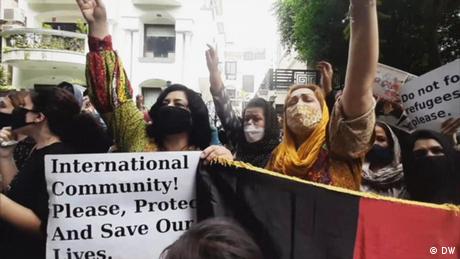 Many Afghan migrants and asylum-seekers, especially single mothers and their children, have been camping outside the office of the United Nations High Commission for Refugees (UNHCR) in New Delhi for more than a week.

They're demanding recognition as refugees and better economic security for their children. Many of them arrived in India several years ago but are struggling to make ends meet because they've not been able to work.

Thousands of them haven't officially been recognized as refugees. India does not have a refugee law and treats all those coming into the country seeking refugee status as illegal migrants under The Foreigners Act of 1946.

The UNHCR is responsible for processing people's applications and determining their status in India. Until then, they're handed a document that allows them to stay in the country.

But the document, a piece of blue paper, is widely dismissed by Indian authorities.

Without assistance from the Indian government and officials, asylum-seekers and migrants find it immensely challenging to either rent homes or find work.

At the same time, the Indian government has reportedly begun processing emergency e-visas for Afghan nationals fleeing the Taliban. These visas are only valid for six months.

"This is an evolving situation. Making long-term plans has not been the best of ideas," Arindam Bagchi, the spokesperson for the External Affairs Ministry, told local news agency ANI on August 27.

There are around 21,000 Afghans in India, according to Ahmad Zhia Ghani, the head of the Afghan asylum-seeker community in the country.

Zia Ghani told DW that Afghans were looking for refugee cards so they can apply for long-term visas, among other things.

According to the UNCHR, around 11,000 Afghans are registered in India as asylum-seekers. That means they remain under consideration for being officially recognized as refugees in the country.

Amina Mohmand Najla arrived in India over a decade ago. She has the blue paper that says her refugee status is under consideration. She says it has been the case for many years now.

She renews the document every time it lapses, about every year or so.

Najla earlier worked as an interpreter for Afghans arriving in Delhi but lost her job a couple of years ago. Her son, Emad, was just six when he arrived in India. He is 16 today and laments about not being able to finish high school.

Emad says he had to drop out of high school just six months before finishing classes because his family couldn't pay the fees. "My country needs aid, and I wanted to be a doctor," he said. "I have nothing now."

Single mothers and children at the forefront of protests

Most women said they received some money from their families in Afghanistan. But the current situation has left them in a more difficult place.

One woman, who asked not to be named for safety reasons, said her husband was a Taliban fighter in Afghanistan.

Others said that the UNHCR has not helped them resettle in other countries like the US or Canada, pointing out that the UN agency is the only body that can issue a "support letter" that embassies typically ask to duly process their visas for immigration.

"In the absence of legal status, they don't really have much to do in India. So, economically they are languishing," said Chayanika Saxena, who's writing her doctoral thesis at the National University of Singapore on the Afghan diaspora in India.

Others have taken up odd jobs to make ends meet.

Gulbashra Ahmad, for instance, worked as a lawyer in Afghanistan, but since her arrival in India in 2019, she's been working at a garment factory.

Zahra and Brishna are sisters and they don't have family in the country. They often take up work as domestic helpers in other people's houses. "We just want to go to school," the sisters say.

Why don't they have rights in the first place?

India is not a signatory to the UN's 1951 Refugee Convention and the 1967 Protocol Relating to the Status of Refugees.

It has an inconsistent policy toward asylum-seekers and refugees. It treats them differently, either based on relations with the country from where they are arriving or after considering domestic politics.

For example, the Indian government assists Tibetans and Sri Lankans but considers Rohingya Muslims from Myanmar a threat to national security.

On August 17, New Delhi said it would grant asylum to Afghans of all religions. That means it would go beyond just helping Afghan Hindus and Sikhs.

But what the government says might not actually reflect what happens on the ground.

Without a firm asylum policy in place, there is little transparency about how people are being granted visas.

One recent case of confusion was that of the deportation of an Afghan MP who had arrived from Istanbul to Delhi on August 20. She holds a diplomatic passport and does not require a visa to enter India.

She was asked to wait at the airport and was deported to Istanbul within two hours. She said she was given no reason for her deportation.

"It was probably related to the changed political situation in Kabul, maybe security," the MP, Rangina Kargar, told The Indian Express newspaper.

The Indian government later said the deportation was a mistake and asked her to apply for an emergency e-visa.