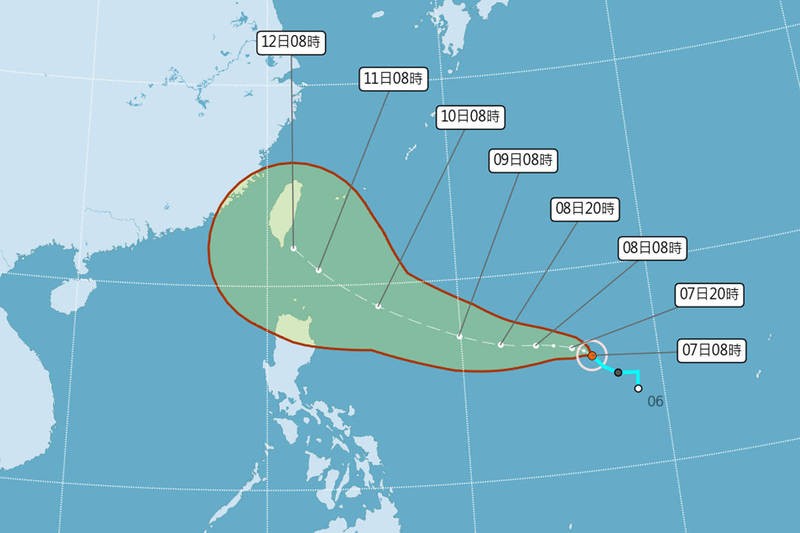 TAIPEI (Taiwan News) — A tropical storm that formed this morning (Sept. 7) is currently predicted to come closest to Taiwan over the weekend, according to the Central Weather Bureau (CWB).

The CWB stated that a tropical depression situated near Guam was upgraded to Tropical Storm Chanthu (璨樹) this morning. The weather bureau stated that it is still uncertain whether the storm will strike Taiwan directly, but it will likely affect the weather in the country.

As of 8 a.m., Tropical Storm Chanthu was about 1,800 kilometers southeast of Taiwan's southernmost tip of Eluanbi, moving northwest at a speed of 10 kilometers per hour. It had a radius of 80 km and was packing maximum sustained winds of 64 kph and gusts of up to 90 kph, the CWB reported.

Based on current data, the CWB projects that Chanthu will come closest to Taiwan between Saturday and Monday (Sept. 11 and 13). Meteorologist and WeatherRisk Explore Inc. CEO Peng Chi-ming (彭啟明) said that Chanthu will likely follow the lower edge of a high-pressure system to the west.

Peng said that the high-pressure ridge is expected to weaken somewhat when the periphery of Chanthu begins to near Taiwan on Friday (Sept. 10). This weakening could draw the tropical storm north and away from the country.

However, Peng said that other weather models, such as the Japan Meteorological Agency and Joint Typhoon Warning Center, predict that the tropical storm will shift southward toward the southern tip of Taiwan. Peng said the current models diverge by nearly 500 km, and for that reason more observation is needed to provide a more accurate estimate of the storm's path.

Meanwhile, Tropical Storm Conson, which has made landfall in the Philippines, is predicted to make its way to the South China Sea and continue to move west. It is not currently anticipated to have a direct impact on Taiwan.