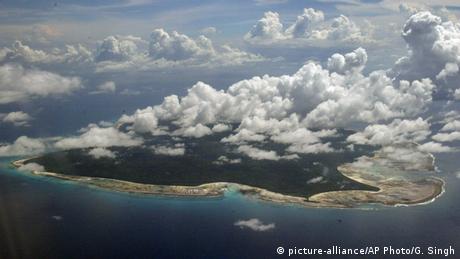 The Indian government introduced a new plan in August to boost the production of palm oil. India is one of the largest consumers of palm oil, which is used in almost everything from soaps to chips. But the country still imports most of its palm oil.

India also produces a range of other vegetable oils, like mustard and soybean, but it has seen exponential demand for palm oil over the last few years.

To reduce dependence on other countries and cut down on import bills, the government decided to boost domestic production of the commodity. Sky-high prices this year have also compelled the government to rethink its strategy.

What is India's palm oil 'mission'?

India wants to target the northeast of the country and the eastern archipelago of the Andaman and Nicobar islands for its project.

These ecologically sensitive areas are home to many different kinds of flora and fauna.

Prime Minister Narendra Modi has hailed the NMEO-OP as a "game-changer," and said the project would benefit these regions.

The government also hopes that the initiative will help farmers increase their incomes, with a crop that yields more oil than traditional oilseeds like peanut or sunflower.

India requires 25 million tons of palm oil every year, according to M.V. Prasad, a scientist at the Indian Institute of Oil Palm Research. The country produces around 10 million tons and imports a further 15 million from other countries.

How will the project impact biodiversity?

Officials have said that the government wants the cultivation of oil palm crops to take place only on lands already being used by farmers. Environmentalists, however, remain skeptical and are concerned about the kind of impact the project could have on India's wildlife.

Sudhir Kumar Suthar, an assistant political science professor at Jawaharlal Nehru University in New Delhi, said that replacing one type of forest cover with another — as in the case of palm oil cultivation — threatens the existence of biodiversity.

India's northeastern region is home to 51 types of forests, and palm oil cultivation could prove destructive, he said.

How would farmers and tribal communities be affected?

Vinita Gowda, an evolutionary biologist who has studied northeastern India extensively, warns that the Indian government should learn from what is happening to palm oil giants like Indonesia and Malaysia.

The two Southeast Asian countries produce about 80% to 90% of the world's palm oil on plantations that were once forests. But conservationists are urging the Indonesian government to extend a freeze on palm oil cultivation that came into effect in 2015.

The US, meanwhile, has banned imports of palm oil from two Malaysian plantations over alleged claims of abuse of workers.

According to Suthar, oil palm cultivation could also negatively impact water tables in the country and the way land is used by farmers and tribal peoples.

Suthar cited India's northeastern state of Arunachal Pradesh, where much of the land is owned by tribal communities. The political scientist warned cultivation would affect the forest rights of tribespeople.