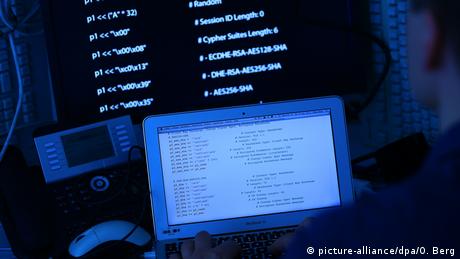 Sasse added that a ministry official had made the same demand directly to a representative of the Russian Foreign Ministry last week.

What are the details of the cyberattacks on German politicians?

Sasse said that a hacker outfit called "Ghostwriter" had been "combining conventional cyberattacks with disinformation and influence operations" and that activities targeting Germany have been observed "for some time."

Most recently, several lawmakers from the governing coalition parties – the CDU/CSU and SPD – are said to have been affected by the hack.

Sasse said that ahead of Germany's parliamentary election on September 26, there were attempts to obtain personal login details of federal and state lawmakers, with the aim of committing identity theft.

Why did Germany accuse Russia of being behind the attacks?

Security authorities had informed the German parliament at least three times this year about cyberattacks on parliamentarians by foreign intelligence service.

"These attacks could serve as preparations for influence operations such as disinformation campaigns connected with the parliamentary election,'' Sasse said.

"The German government has reliable information on the basis of which Ghostwriter activities can be attributed to cyber-actors of the Russian state and, specifically, Russia's GRU military intelligence service."

It "views this unacceptable activity as a danger to the security of the Federal Republic of Germany and for the process of democratic decision-making, and as a severe strain on bilateral relations.''

Sasse also said that Germany urges the Russian government to end such activity immediately, and has made that demand directly to Russian officials.