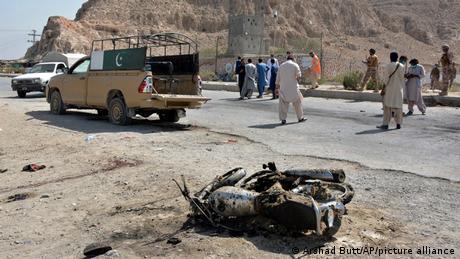 At least three paramilitary troops have died and around 15 others have been injured after a suicide bomber on Sunday detonated his explosives near a security checkpoint in troubled southwestern Pakistan, police said.

A senior police official told The Associated Press that the death toll could rise since people were gravely injured by the blast.

The incident took place near a checkpoint manned by the Pakistani paramilitary Frontier Corps on Quetta-Mastung Road. The road is about 15 miles (24 kilometers) south of Quetta, the provincial capital of the restive Balochistan province.

There are conflicting reports about whether the suicide bomber traveled on a motorbike or walked to the checkpoint before detonating the explosives.

The banned group Tehreek-e-Taliban Pakistan (TTP) has claimed responsibility for the attack.

Other groups, like the banned Baluch Liberation Army and Baluch Liberation Front, have also been engaged in a low-level insurgency for decades calling for independence for the gas and mineral-rich province. They have accused the federal government of exploiting the region's natural resources.

What else do we know about the attack?

The bomber reportedly targeted Frontier Constabulary guards in the Mian Ghundi neighborhood of Quetta, according to the AFP news agency. Security forces have often been attacked by Baloch insurgents.

This area where the incident took place is close to the Afghan border, and Hazara Shiite merchants were trading vegetables during the morning of the attack, according to AFP.

Shiite Muslims have been frequently targeted in Balochistan by radical Sunni Islamist groups, who consider them a heretical sect.

Latest in a series of attacks by insurgents in Balochistan

A suicide bomber last month detonated his explosives near a vehicle carrying Chinese workers, killing two Pakistani children playing by the roadside and wounding a Chinese national and two other Pakistanis in the southwestern port city of Gwadar.

Suspected separatists also last month hurled a hand grenade at a store selling national flags in Quetta, killing one man and injuring four others who were buying flags to celebrate Pakistan's Independence Day.