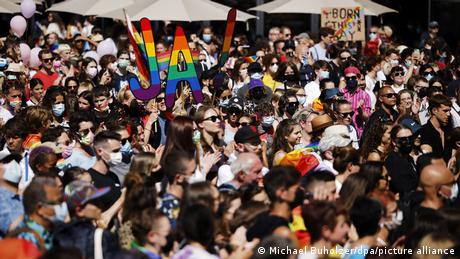 Tens of thousands of people turned up at the Zurich Pride March to demand same-sex marriage be legalized in Switzerland ahead of a referendum due on September 26.

Swiss Lawmakers had voted to legalize marriage for LGBTQ+ couples in December. But conservative politicians raised enough signatures to take the matter to a national referendum.

Marching for the 'yes' vote

With the slogan, "You can do it. Marriage for everyone now," the Pride march organizers saw an avalanche of support in the Zurich march.

Public broadcaster SRF said around 20,000 people took part in the rallies, including 70 LGBTQ+ organizations from around the country.

Organizers said it was "the most important sociopolitical vote in decades" — in a country used to large-scale referendums, which occur about four times a year.

What is the amendment?

The amendment to the Swiss Civil Code replaces the words "bride" and "groom" with either "two people" or "the engaged."

It allows lesbian, gay, bisexual, transgender, queer and intersex people to marry, instead of just getting civil unions — as has been the case to date.

Opponents say that marriage should be reserved for a man and a woman only, so that children can have a traditional father and mother.

According to a poll by Swiss gay rights group Pink Cross, 82% of the Swiss population supports same-sex marriage.

The law follows the recognition of LGBTQ+ marriage in many European countries like Germany, Austria, France and the Netherlands. The EU has slammed countries going in the opposite direction like Hungary and Poland.