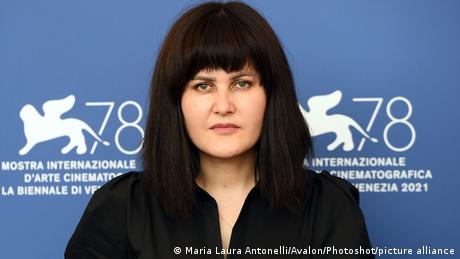 A panel of Afghan female filmmakers at the Venice Film Festival urged the world not to abandon the people of Afghanistan and help protect its culture and artists.

Sahraa Karimi, the first female president of the Afghan Film Organization, and documentary filmmaker Sahra Mani, warned that a country without culture will ultimately lose its identity.

The organizers of the panel discussion said they intend to raise global awareness, especially among media agencies, governments and humanitarian organizations.

They sought to shed light on "the dramatic situation of Afghan filmmakers and artists in general, the need for the creation of humanitarian corridors and the guarantee of granting them political refugee status."

Karimi said all the efforts of Afghan filmmakers have been lost.

"It was our dream to change the narrative of Afghanistan, because we were tired of those cliches about Afghanistan," she said. "We wanted to produce films, movies and to tell our stories from different angles, from different perspectives, to show the beauty of our country."

She cited numerous films in pre-and-post production, filmmaking workshops, insurance policies that have been suspended, with Afghanistan's film archives now under Taliban control.

Fighting back tears, the filmmaker recounted to reporters how she had to choose in a matter of hours "the most difficult decision" of her life — whether to stay or flee her homeland.

Karimi fled Kabul on August 15, along with her siblings and nieces. She is now a refugee in Ukraine.

According to Karimi, thousands of filmmakers couldn't leave Afghanistan and — fearing for their safety — are now erasing their social media presence and going underground.

Mani said she had decided to stay in Afghanistan under the rule of the country's ousted government because she was determined to revamp its cultural scene.

"We stayed. We were optimists," she said. But with the Taliban takeover, "it means we don't have anything to fight for. We lost everything." Mani is set to present a project at the Venice film market fair.