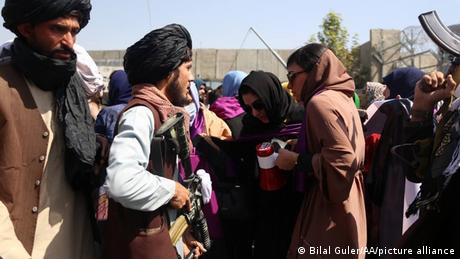 Clashes broke out Saturday as the Taliban broke up a women's rights protest in the Afghan capital, Kabul.

The activists staged a protest close to the Afghan presidential palace and held banners reading "We are not women of the 90s," referring to the strict curbs on women's movement under the Taliban's previous rule.

Local media outlet Etilaatroz reported that the hardline Islamist fighters used tear gas and batons to prevent them from reaching the palace.

Women could be seen coughing, indicating tear gas had been fired.

At least one woman 'beaten'

Other women claimed to have been beaten, including one whose image was shared by journalists with blood running from her head.

Afghan women have held protests for the past two days in Taliban-controlled Kabul, advocating for women's rights and demanding equality, justice and democracy.

The militant group claims that they will respect women's rights according to their interpretation of Islamic teachings, which some say is a contradiction in terms.

Before Saturday's protest, there were already reports of violence against women and that their movements are being curbed.

When the Taliban last ruled in the 1990s, the women had to fully cover from head to toe and were not allowed to walk outside without being escorted by a family member.

In addition, women were not allowed to attend school or work in society.

With material from DPA news agency