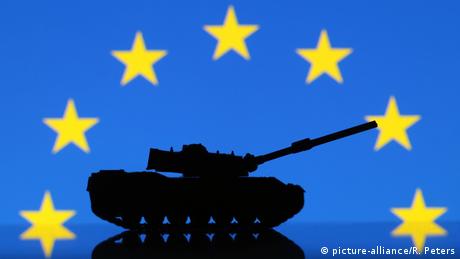 In the wake of the Afghanistan disaster, various EU defense and foreign ministers are calling for more military autonomy and a common intervention force. Once again. For over 20 years, there has been talk of an EU force that would be able to act without US support, possibly around the world.

But it still does not exist: First, because there is a lack of political will; and secondly, because it would be expensive and complicated to set up in military terms. On paper, the bloc does have a common defense policy, but the European Defense Agency (EDA) is one that largely busies itself with niche projects and feasibility studies.

There is no meaningful EU joint command structure, as national governments are still responsible for defense. This is likely to remain the case, because in most EU states, there has been a lack of political will to step out of the US' shadow. That includes Germany, which under Defense Ministers Ursula von der Leyen und Annegret Kramp-Karrenbauer showed no desire to undertake the massive expansion of the now only partially operational and depleted German Bundeswehr that would be necessary to do so. And no powerful force can be built up without Germany and just on the strength of repeated ambitious proposals from France.

All in it together

Will the shock of the precipitous withdrawal from Afghanistan make a major difference? Unlikely. After all, there never was a specific EU mission in Afghanistan, only NATO missions under US leadership. This is not surprising, considering that the US Army is the only force able to organize an operation of such magnitude and so far away.

This particular military problem in Afghanistan arose because the US and NATO, including its European members, decided to withdraw unconditionally by a particular deadline, without taking into account the situation on the ground. The US — that is, former President Donald Trump and current President Joe Biden — went through with this without waiting for their NATO allies, let alone the EU, which was not even involved. The motto had always been "in together, out together."

Now, they have also failed together, notwithstanding the extraordinary talk in Washington of a successful airlift. What would an EU intervention force of the kind currently being talked about in Brdo, Slovenia, have changed in Afghanistan? Would the EU have sent 5,000 soldiers to Kabul to secure the airport without the US? That would hardly have been possible politically. Moreover, the EU member states would have lacked the military capacities to do this and provide a longer-lasting airlift. To build up such capabilities would take years, if not decades.

The EU can continue to dream of an army that will certainly never exist in the way it is being imagined. But it would be better if it were to strengthen its presence in NATO.

The alliance's European members should work more closely together to coordinate a joint armaments, training and leadership policy. For the moment, the armies of NATO's EU members are still too inefficient, expensive and bureaucratic, as well as far too prone to working on their own instead of together.

In the long run, they will have to acquire better intelligence capabilities, drones, airlift capacities and more. But they will still not be able to detach themselves from the military superpower that is the US. Full European military sovereignty is neither a possible nor a desirable goal.

Afghanistan must not be repeated

In the wake of the "heavy defeat" in Afghanistan, Germany's Defense Ministry has said that talks have to move from the meta-level to concrete action. How true! The next chance is the "strategic compass" that the EU is currently developing. The idea is to bring together the member states' various goals regarding defense and foreign policy. It's about time after 30 years of supposed joint foreign policy!

The EU should also propose a concrete plan for evacuating trainers and other personnel from Mali if France does withdraw its troops from the fragile Sahel region. The disastrous situation in Afghanistan must not be repeated.