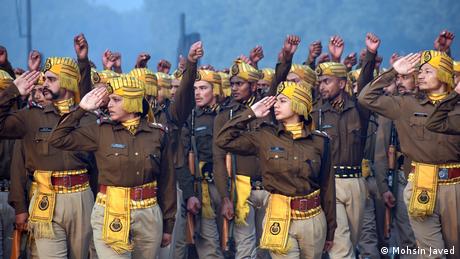 The Indian Supreme Court ruled last month that female students will now be allowed to train at one of the country's elite military training institutions, the National Defence Academy (NDA).

In another move aimed at creating gender balance in the armed forces, the Sainik Schools (soldier schools) will be opened to female students. These schools, while also teaching a standard grade-school curriculum, prepare students for a career in the armed forces.

There are 33 Sainik Schools in India. Girls were first admitted to the Mizoram Sainik School for the 2018-2019 academic year, while a few other schools included women during that same school year. However, the new ruling will make the inclusion of women standard, paving the way for more women to join the military, which is vastly male-dominated.

"After the success of the pilot project to admit girl cadets to the Sainik School Chhingchhip, Mizoram, the government has decided to admit both girls and boys to all Sainik Schools for the 2021-2022 academic session," then-Minister of State for Defense Shripad Naik told the lower house of parliament in March.

However, the last six years have seen a rise in the number of women joining the armed forces, with around 9,118 actively serving in 2021.

That's up from just 3,000 who served in 2015. The number of women increased as the Air Force began allowing women to join and the Navy began recruiting female pilots.

"In these modern times, young women should not be denied career choices based on their gender," Sajita Nair, a female former army officer, told DW.

"With women officers flying fighter jets, commanding units and women jawans [soldiers] being recruited to the regular army, it is only a matter of time before women play a much larger and significant role in the Indian armed forces."

The first women were commissioned in the Indian Navy in 1992. Until 2020, women were only given short service commissions, but a Supreme Court ruling has made permanent service available to women as well.

Many other logistical changes will also have to be made as a result of the new inclusion. "Changes in infrastructure are required to accommodate women in the units," said Nair, who joined the Army Ordnance Corps in 1994.

Those changes could include new units to house women and gender sensitivity training. "There have also been issues rooted in gender stereotyping in our society," she said.

"As many jawans come from rural backgrounds, where women play traditional domestic roles, some of them find it difficult to adjust to having women as their superiors," Nair added.

Nair also called for increased recruitment of women in officer and leadership roles.

As attempts are made to close the gender gap, problems that women face in the field are increasingly brought to the surface.

"These are all positive changes, but we still have a long way to go," a former lawyer for women in the armed forces, who asked not to be named, told DW.

"This has opened some new avenues, but there are many ranks, especially the lower ones, which only men can join. The patriarchal mindset of our home and family units has to be changed first. Only then will we have better working conditions for women in the military."